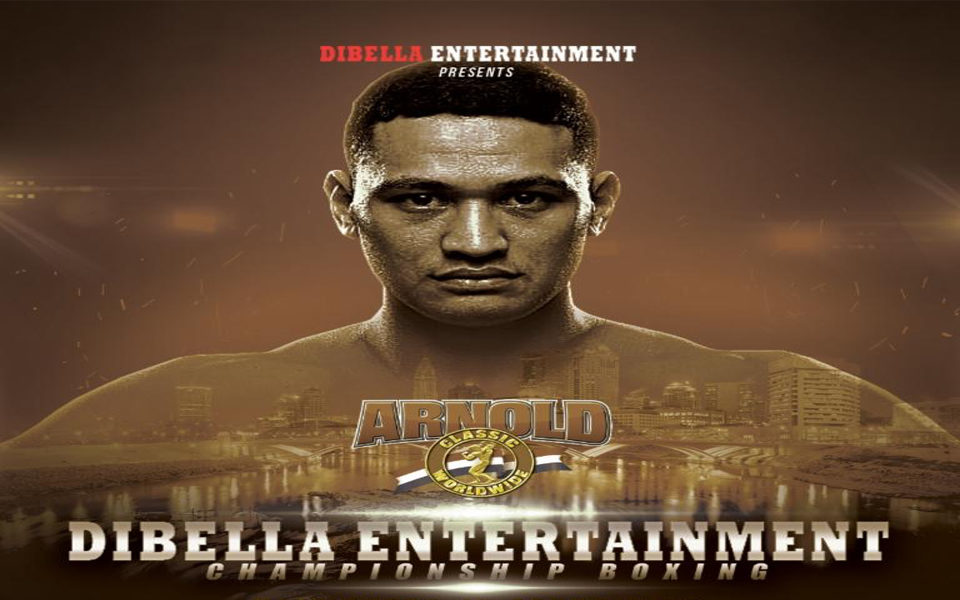 New York, NY (February 28, 2019) World ranked heavyweight contender Junior Fa (16-0, 9 KOs), of Otahuhu, New Zealand, has returned to the United States for a 10-round clash against former French heavyweight champion Newfel Ouatah (16-2, 9 KO’s) this Saturday, March 2, headlining a SPECIAL EDITION of DiBella Entertainment’s acclaimed and long-running Broadway Boxing series at the Voinovich Center in Columbus, OH. The event is a partnership with entertainment legend and politician Arnold Schwarzenegger at the Arnold Sports Festival and will be streamed on LIVE.DBE1.com, as part of DBE’s partnership with CBS Sports Digital and Sportslive, starting at 7:00 p.m. EST.

“I love fighting in the US, it’s a bit different than New Zealand. There’s more people watching and I like the opportunity to impress boxing fans over here,” said Fa. “We arrived in Las Vegas 10 days ago and spent a week there finishing up our training before coming to Ohio.”

“I follow the rest of the heavyweight division carefully and it seems as if there’s three big names; Wilder, Joshua and Fury, and then the rest. I’m not sure how much they will be fighting each other, but I like the idea of facing any of the three at the appropriate time,” continued Fa, ranked no. 8 by the WBO.

“Before he fought Tyson Fury, I spent three weeks sparring with Deontay Wilder in Birmingham and it was a tremendous learning experience for me. In our sessions, I gained quite a bit of confidence working with him over that period. Also, being in camp with him helped me see how a heavyweight champion works, prepares and sacrifices to ensure he keeps his title.”

“I’ve watched a few tapes of Ouatah, so I’m familiar with him. He’s more of a finesse fighter who is going to try out-skill me and not really a slugger. While I’d like a big knockout to make a statement, I want to be scientific about it, take my time and use my skills to set up the stoppage perfectly. That’s how I see the fight going. I won’t be swinging wildly in there, but I do want to put on an entertaining fight for the fans and come back to the United States again soon.

“The 29-year-old Fa has previously fought three times in the United States, including two impressive nationally-televised victories against Fred Latham on November 10, 2017, via devastating first-round knockout, and a 10-round decision versus Craig Lewis on March 9, 2018, both of which aired on SHOWTIME. Returning to New Zealand, Fa won a 10-round decision versus Luis Pascual on June 22, 2018. Most recently, the former amateur standout knocked out Rogelio Omar Rossi in the first round on December 15, 2018.

A professional since 2009, the 33-year-old Oautah has experience at the top level, having battled former world title challenger Johann Duhaupas in 2017 and contender Erkan Teper in 2014. He returns to action following a third-round knockout of Tamaz Zadishvili on December 22, 2018, in Rhone, France.

Tickets for the SPECIAL EDITION of Broadway Boxing start at $40 and may be purchased online HERE.

Celebrating its 31st year, the 2019 Arnold Sports Festival is the world’s largest multi-sport festival featuring 80 events from February 28 to March 3, 2019, in Columbus, OH, attracting an estimated 200,000 sports and fitness fans watching more than 22,000 athletes compete at various city venues. The festival features 16 Olympic events with the world’s most talented athletes from around the world competing. For more information, please visit their website at www.ArnoldSportsFestival.com.

The Voinovich Center is located on the grounds of the Ohio Expo Center, 717 E. 17th Avenue, Columbus, OH 43211. Doors will open on the night of the event at 6:30 p.m. with the first bell at 7:15 p.m. More information on the four-day “Arnold Sports Festival” may be obtained HERE.