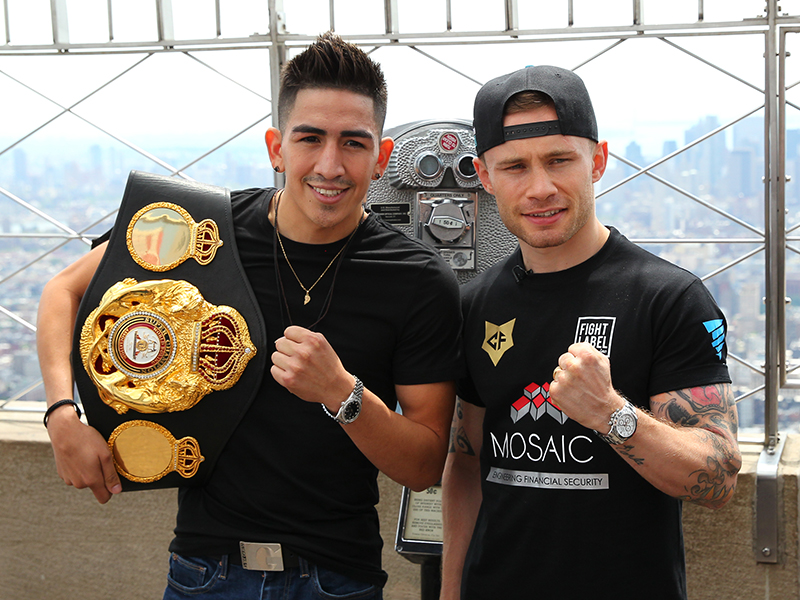 NEW YORK (July 26, 2016) — The 86th Floor Observation Deck of the Empire State Building, home to one of the most iconic views in the world, played host to the very first faceoff between Leo “El Terremoto” Santa Cruz andCarl “The Jackal” Frampton as the undefeated fighters and their teams met for the first time Tuesday to formally kick off the joint fight week festivities.
Featherweight world champion Santa Cruz(32-0-1, 18 KOs) will defend against the former unified 122-pound world champion Frampton (22-0, 14 KOs) in this Saturday’s main event live on SHOWTIME®(9 p.m. ET/6 p.m. PT) from Barclays Center in Brooklyn, N.Y.
Prior to Tuesday’s faceoff, Santa Cruz and his family, which included his ailing father, were officially welcomed to the state by the Consul General of Mexico, which hosted an event  at the Mexican Consulate in association with Mano a Mano, a nonprofit that is dedicated to celebrating Mexican culture in and around the New York area.
Dozens of media members were in attendance as were devoted fans who waited to take a photo with Santa Cruz.

Speaking to the large gathering, Consul General Diego Gomez Pickering said,”Mexican immigrants are an asset to the United States. They are artists, chefs, doctors, lawyers, athletes and, yes, boxers. Leo Santa Cruz is a living example and has become a role model for Mexican-American youth.

“Without a doubt, Leo is the best example of the talent that can be found in the Mexican-American community. I take personal pride today in welcoming Leo to New York City. I would like to thank Leo for the great inspiration he is to all of us.”

Santa Cruz, making his first trip to New York City, addressed his father Jose‘s cancer diagnosis and treatment.  “I am so happy my father is here with us,” said Santa Cruz, who often credits his success to his father’s dreams and support. “We thought he might not be able to make it, but thank God he is here with us. Not having my dad here in New York with me would have been hard. It actually brought tears to my eyes.
“But I am very happy that he is here and will be in my corner for my fight.
“Thank you to all of the people who are here and all of the people that support me. I am so happy to be here and hopefully I can make you all proud and put on a great show this Saturday night.”
***
Tickets for the live event, which is presented by Premier Boxing Champions and promoted by DiBella Entertainment in association with Cyclone Promotions, start at $38 and can be purchased online by visiting www.ticketmaster.com, www.barclayscenter.com or by calling 1-800-745-3000. Tickets are also available at the American Express Box Office at Barclays Center. Group discounts are available by calling 844-BKLYN-GP.
Undefeated former two-division world champion Mikey Garcia will fight for the first time in two-and-one-half years when he faces Elio Rojas in the co-feature on SHOWTIME. In the opening bout of the SHOWTIME CHAMPIONSHIP BOXING telecast, Tony Harrison and Sergey Rabchenko will meet in a 12-round IBF Junior Middleweight Elimination Bout.
An all-Brooklyn showdown between welterweight technicians Paulie “Magic Man” Malignaggi and Gabriel “Tito” Bracero highlights the undercard action on SHOWTIME BOXING on SHOWTIME EXTREME.  The 10-round bout is a matchup between a former two-division world champion, Malignaggi, and a fellow Brooklyn native, Bracero, coming off the biggest win of his career when he knocked out Danny O’Connor last October.
A 10-round clash between once-beaten lightweight Ivan Redkach and streaking Tevin Farmer, a winner of 14 straight, will open the SHOWTIME EXTREME telecast live at 7 p.m. ET/PT.
Click to Download Empire State Photos by Amanda Westcott/SHOWTIME
Click to Download Mexican Consulate Visit Photos by Amanda Westcott/SHOWTIME
Click to Download Empire State Photos by Ed Diller/DiBella Entertainment
Barclays Center’s BROOKLYN BOXING™ programming platform is presented by AARP.  For more information visit www.SHO.com/Sports follow on Twitter @SHOSports, @LeoSantaCruz2, @RealCFrampton, @BarclaysCenter, and @Swanson_Comm or become a fan on Facebook at www.Facebook.com/SHOSports,www.Facebook.com/DiBellaEntertainment, www.Facebook.com/barclayscenter. PBC is sponsored by Corona, La Cerveza Mas Fina.
CONTACTS:
Swanson Communications: (202) 783-5500
DiBella Entertainment: (212) 947-2577
Chris DeBlasio, Showtime Networks Inc.: (212) 708-1633
Matt Donovan, Showtime Networks Inc.: (212) 708-1663
Flo Jocou, Showtime Networks Inc.: (212) 708-7319
John Beyrooty BZA/SHOWTIME: (562) 233-7477
Barry Baum, Barclays Center: (718) 942-9533
Website Admin