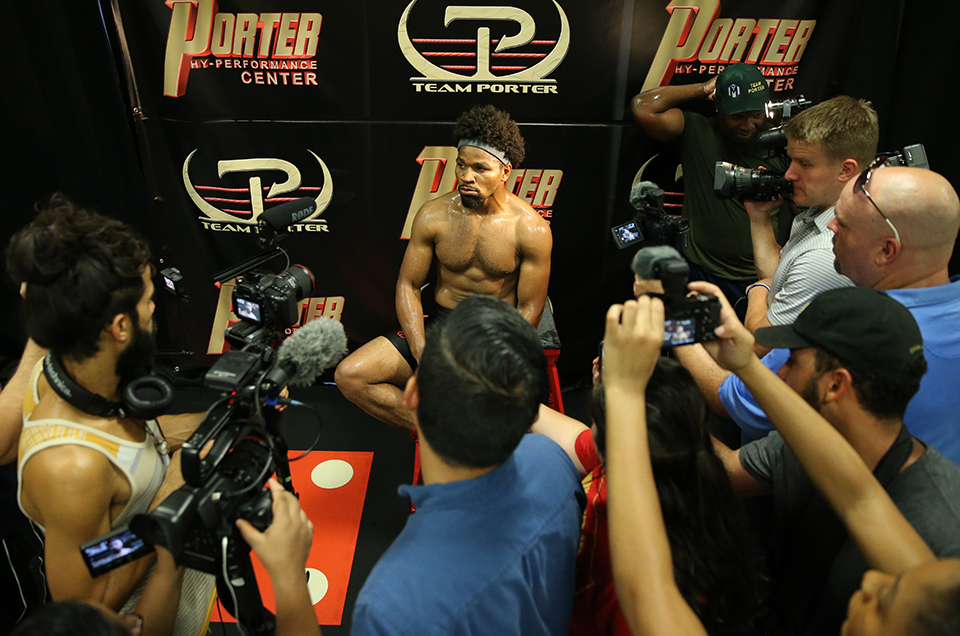 Former Welterweight World Champion Battles Danny Garcia
for Vacant World Title Saturday, September 8 Live on
SHOWTIME from Barclays Center in Brooklyn &
Presented by Premier Boxing Champions
Click HERE for Photos from Nabeel Ahmad/
Premier Boxing Champions
LAS VEGAS (August 16, 2018) – Former welterweight world champion “Showtime” Shawn Porter hosted a media workout at the Porter Hy-Performance Center in Las Vegas Wednesday as he prepares to take on Danny “Swift” Garcia for the vacant WBC Welterweight World Championship on Saturday, September 8 live on SHOWTIME from Barclays Center, the home of BROOKLYN BOXING™.
The SHOWTIME CHAMPIONSHIP BOXING telecast begins at 9 p.m. ET/6 p.m. PT and features a welterweight title eliminator between Yordenis Ugas and Cesar Barrionuevo and heavyweight action that pits unbeaten Polish slugger Adam Kownacki against former heavyweight champion Charles Martin.
Undercard streaming coverage begins at 7 p.m. ET/4 p.m. PT on SHOWTIME CHAMPIONSHIP BOXING COUNTDOWN as five-division world champion Amanda Serrano attempts to win a world title in her record sixth weight class when she faces Yamila Esther Reynoso for the WBO 140-pound title.
Tickets for the live event, which is promoted by TGB Promotions and DiBella Entertainment, in association with DSG Promotions, start at $50 and are on sale now. Tickets can be purchased at ticketmaster.com, barclayscenter.com, or by calling 800-745-3000. Tickets can also be purchased at the American Express Box Office at Barclays Center. Group discounts are available by calling 844-BKLYN-GP.
Porter was joined by his father and trainer, Ken Porter, as the two discussed the highly-anticipated welterweight showdown presented by Premier Boxing Champions. Here is what the Porters had to say Wednesday:
SHAWN PORTER
“I love being in training camp and grinding every day. We’re just 100 percent focused on what we have to do. I’m seasoned enough where I know how to excel through these stages of camp. I feel great.
“We always work on the jab to start our training session. Everyone knows that everything I do comes off of my jab. It’s all about the fundamentals. My dad is smart and knows my athletic potential is there. He’s focused on all the technical and strategic parts of the game.
“Whether we look to box or not will be a game-time decision. We’ll have to read the fight. I think we’re going to start trying to mix it up and then take it from there. It’s up to me to see the adjustments and make them. Whatever it takes to win this fight, I am prepared to do it.
“Danny’s counter-punching I think plays into my hands. I’m a combination puncher. There’s more than one coming. If there is only one coming, you don’t know where it’s coming from. I think it’s going to take care of Danny’s strength, but I don’t take it lightly. I know that he’s a strong fighter and that’s what I expect in the ring.
“I don’t believe that he’s going to stand toe-to-toe with me, but I do believe that’s where he thinks he can win the fight. The point is to hit and not get hit, so we’ll try to keep it as clean as possible. It gets rough in there sometimes, but if you can’t handle the heat, get out of the kitchen.
“Once upon a time I probably would have that thought that I could just beat Danny with activity. But I know that I have to be sharp, precise and land most of my punches. I want to throw 60 a round and land 40 percent.
“I’m going go out there and be aggressive, be sharp, be quick and let the rest take care of itself. This is a humungous fight that I’ve been looking forward to for a long time.”
KEN PORTER, Shawn’s Father & Trainer
“Any fight that Shawn is in, you’re going to have action. If Shawn went in there and laid back, I doubt that Danny would go after him. I just don’t think Danny is going to go forward like that.
“We have to continue to do what we’ve done to get this far. But we’re not going to go after him the way he expects us to.
“Danny is trying to pump himself up like he’s some kind of one-punch knockout artist. But I’m a one-punch artist if it’s against someone who can’t box anymore or who’s coming way up in weight. If you hit Shawn Porter with one of those punches, he’s going to hit right back, and with Shawn, it’s going to be more than one.
“My focus is on making sure that Shawn is prepared to do the things I need him to do. I have to get him where I need before I focus too much on what Danny is going to bring. We’re making sure Shawn is 100 percent first.”
#          #          #
For more information visit www.SHO.com/Sports,www.PremierBoxingChampions.com, follow on Twitter @ShowtimeBoxing, @PremierBoxing, @DannySwift, @ShowtimeShawnP, @LouDiBella, @TGBPromotions, or become a fan on Facebook at www.Facebook.com/SHOBoxing and www.Facebook.com/DiBellaEntertainment. PBC is sponsored by Corona, La Cerveza Mas Fina.
CONTACTS:  Swanson Communications: (202) 783-5500, contact@swansonpr.com
Bernie Bahrmasel, DiBella Entertainment:(212) 947-2577
Monica Jaffe, TGB Promotions: (818) 817-8001
Tim Smith, Premier Boxing Champions: timothy@haymonboxing.com
SHOWTIME Sports: (212) 708-1339
Mandy Gutmann, BSE: (718) 942-9587
Stuart Bryan, BSE: (718) 942-9574
Steve Pratt, BZA: (310) 408-4555
Credentials: www.magnamedia.com
Website Admin