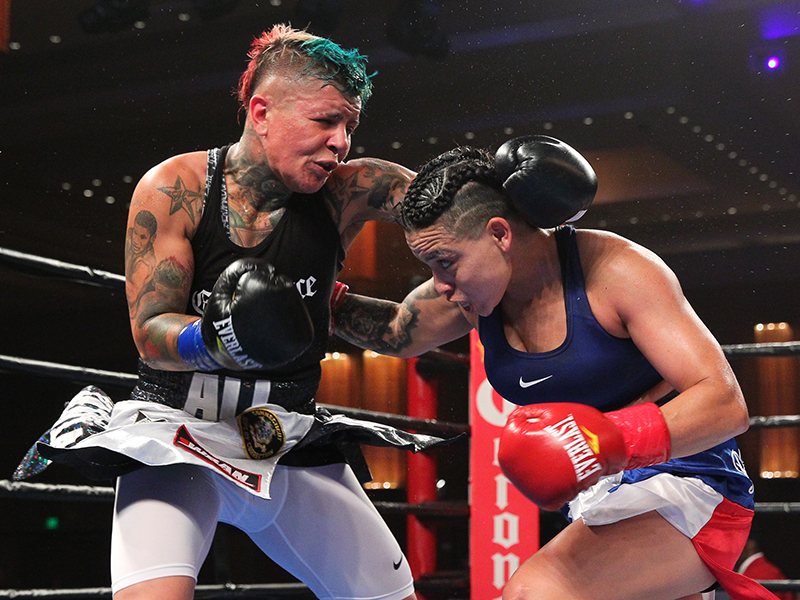 Viewers should especially tune in to see Providence, Rhode Island’s Shelly “Shelito’s Way” Vincent, a major New England attraction, in her New York debut. Vincent, of course, will return to New York when she faces longtime rival Heather “The Heat” Hardy in an eagerly anticipated matchup on Sunday, August 21, at Ford Amphitheater at Coney Island Boardwalk in Brooklyn, televised by NBC Sports Net.

On tomorrow’s episode of Broadway Boxing on SNY, Vincent takes on former two-time Hardy opponent, Hungarian Renata Domsodi, in a junior featherweight bout fought almost entirely shoulder-to-shoulder. It was Vincent’s first fight under the DiBella Entertainment promotional banner. Hardy, an interested ringside observer that night, entered the ring during Vincent’s post-fight interview with commentator Steve Farhood and the two began taunting each other with the understanding that their ring encounter could be imminent.

On Sunday, August 21, at Ford Amphitheater at Coney Island Boardwalk in Brooklyn, US Olympian and undefeated rising star Errol “The Truth” Spence Jr. (20-0, 17 KOs) challenges once-beaten contender Leonard “The Lion” Bundu (33-1-2, 12 KOs) in a 12-round welterweight world title eliminator that headlines Premier Boxing Champions (PBC) on NBC. The Hardy-Vincent bout will appear on the undercard, televised by NBC Sports Net. Tickets for the live event, which is promoted by DiBella Entertainment and presented by BROOKLYN BOXING™, start at $35 and can be purchased online by visiting www.ticketmaster.com and fordamphitheaterconeyisland.com.

“DBE is thrilled to continue our partnership with SNY,” said Lou DiBella, President of DiBella Entertainment. “The network has been home to Broadway Boxing for the past eight years and has maintained high ratings by consistently providing viewers with exciting action. Many champions, former champions and rising contenders have passed through Broadway Boxing and I look forward to seeing that continue over these next four episodes, which will include the finals of this year’s New York Daily News Golden Gloves tournament.”

The Broadway Boxing series was launched in April 2004 as a monthly boxing series in association with partner HD Net. By August of 2008, Broadway Boxing had become a weekly series on SNY with a combination of live programming and taped delayed broadcasts of previous events.

For the past eight years, Broadway Boxing has aired every Sunday night at 8 p.m. ET on SNY. Over those eight years, the Broadway Boxing series has grown to produce some of the highest ratings for any program broadcast on SNY, outside of NY Mets games. Also, for the third consecutive year, DBE and SNY have partnered with the New York Daily News Golden Gloves to air both nights of the championship matchups from Barclays Center in Brooklyn. Those “Special Edition” Broadway Boxing cards are set to air on August 21st and September 18th.

“Lou DiBella and DiBella Entertainment continue to show their support for the New York amateur boxing program,” said Brian Adams, NY Daily News Golden Gloves Director. “It’s a pleasure to once again have the finals televised through the Broadway Boxing series because it gives the world the opportunity to experience the skills that these young men and women have to offer.”

Below is a complete schedule of the upcoming brand new episodes of Broadway Boxing throughout the month of September. Future show dates will be announced soon. Broadway Boxing is proudly sponsored by Nissan of Queens, OPTYX, Azad Watches and Christos Steak House.