SPOTLIGHT BACK ON AMERICAN HEAVYWEIGHTS 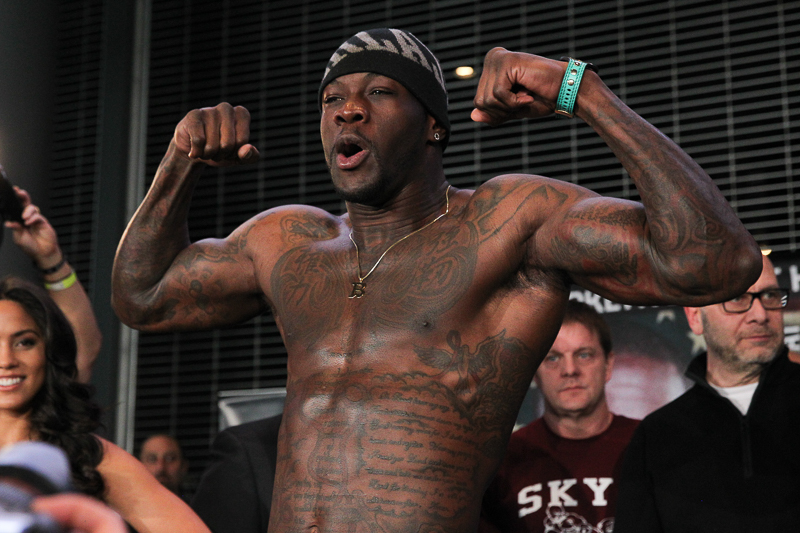 LOOK TO SHINE ON UPCOMING PBC ON NBC CARD

SATURDAY, SEPTEMBER 26 LIVE FROM THE

BIRMINGHAM, AL (September 16, 2015) – Next Saturday night, heavyweight world champion Deontay “The Bronze Bomber” Wilder (34-0, 33 KOs) will make his second world title defense in his home state when he takes on France’s Johann “Reptile” Duhaupas (32-2, 20 KOs) in the feature bout of the evening on Premier Boxing Champions (PBC) on NBC live from the Legacy Arena in Birmingham, Alabama.

Also being featured on the televised portion of the card, heavyweight knockout artist Charles “Missouri” Martin (21-0-1, 19 KOs) squares off against Vicente “Bufalo” Sandez (15-4, 10 KOs) in a 10-round heavyweight affair. The Martin-Sandez bout will be part of the NBCSN broadcast, which begins at 11 p.m. ET/8 p.m. PT.

“People are finally excited again about the heavyweight division,” said Wilder. “There are a lot of young guys coming up looking to make a name for themselves, like Dominic and Charles. For the first time in a long time, an American is the heavyweight champ and the title is staying right here. For the longest time, our division was THE division in boxing and now you are seeing a resurgence of that.  Fighting on network TV gives us the opportunity to showcase ourselves to such a wider audience. People in our country have been waiting for a star in the division for a very long time, and I can promise you, I am the man for the job.”

Already a superstar in his native Alabama, Wilder has seen his popularity grow exponentially since winning a piece of the heavyweight crown in January of this year. Wilder made the first defense of his title in June in a stirring homecoming before a raucous sold-out crowd at the Bartow Arena in Birmingham. He knows that another spectacular performance on Saturday, with primetime TV exposure, will help bring back the interest of the every day sports fan to what was boxing’s most prized division.

The California-native Breazeale played quarterback at the University of Northern Colorado before picking up boxing and, like Wilder, making the U.S. Olympic team after a short amateur career. Breazeale is coming off his most impressive showing to date, a devastating third-round TKO over previously undefeated fellow knockout artist Yosmany Consuegra. Breazeale is looking to parlay his latest victory and show the world that he is ready to compete at the elite level of the heavyweight division when he makes his primetime TV debut on September 26.

Born in St. Louis, Missouri, but fighting out of Carson, California, Martin has stopped his last 10 opponents within the distance. The 29-year-old was the 2012 National P.A.L. champion and 2012 National Golden Gloves runner-up before turning pro in October of that same year. Martin has kept a very busy pace throughout his barely-three-year career, and has already notched three victories this year alone. Like Wilder and Breazeale, Martin is excited about the opportunity to showcase his skills.

“I am excited that PBC is putting the spotlight back on the heavyweights and that it is giving us the opportunity to showcase ourselves to a much wider audience and fan-base. You have the three best American heavyweights in boxing all fighting on the same card, one of which is the heavyweight champion. It is something that you haven’t seen in many years,” stated Martin.

Tickets for the event, which is promoted by DiBella Entertainment in association with Bruno Event Team, start at only $25 and are on sale now. For tickets, please visit www.alabamatitlefight.com.