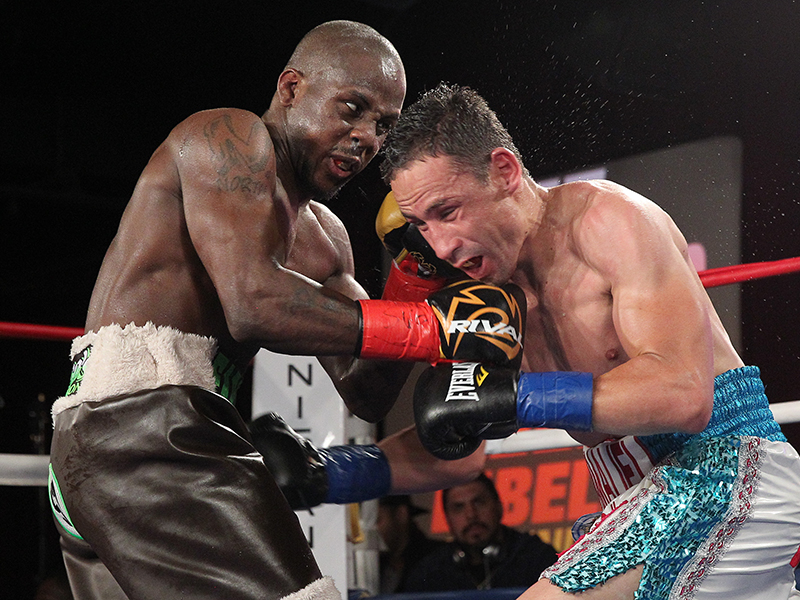 LOOKS TO CLAIM NABF TITLE IN NYC DEBUT NEXT WEDNESDAY AT B.B. KING BLUES CLUB AND GRILL
New York, NY (3/25/16) – Next Wednesday, March 30th, DiBella Entertainment’s Broadway Boxing returns to the famed B.B. King Blues Club and Grill in midtown Manhattan. In the main event bout of the evening, former friends turned crosstown rivals Chris Galeano (10-0, 1KO) and DeVaun Lee (6-2, 3KO’s) will battle it out for New York bragging rights as well as Galeano’s New York State (NYS) middleweight crown when the two meet in a scheduled 10-rounder.
In the co-feature bout, red-hot contender Tevin Farmer (20-4-1, 5KO’s) is determined to impress in his NYC debut when he takes on tough Mexican veteran Gamaliel Diaz (39-13-3, 18KO’s). Farmer versus Diaz is scheduled for 10 rounds with the vacant NABF junior lightweight title on the line.
“I can’t wait to finally get back in the ring on March 30th, in my NYC debut, and with the opportunity to put that NABF championship belt around my waist,” said Farmer. “I have been in the gym every day, never taking my eyes off the prize. I know my fans want and expect nothing but the best from me and that is exactly what they are going to get next Wednesday night.”
It is hard to think of a fighter in recent memory that has made such a drastic turnaround in their career that Farmer has had. The Philadelphia-native lost his pro debut in 2011, and saw his record stand at an uninspiring 7-4-1 following a loss to current IBF 130lb. champion Jose Pedraza in October 2012. Following the loss to Pedraza, which, like many of Farmer’s previous fights, he took on less than two weeks notice, Farmer refocused himself and soon after began to make his successful run.
Fast-forward three years and 13 impressive wins later and the now 25-year-old Farmer has not only emerged as one of the prospects he was once put in against to test but as a legitimate title contender. Ranked #14 in the WBC world ratings, Farmer is coming off his most impressive victory to date, an eighth-round KO over former world title challenger Daulius Prescott in August of last year. During his 13-bout win streak, Farmer also impressively defeated unbeaten foes Emanuel Gonzales (14-0), Angel Luna (10-0-1) and Camilo Perez (9-0), as well as prospects Viktor Chernous (15-1-1) and Noel Echevarria (11-1).
The bout next Wednesday is an extremely important one for Farmer. By picking up the NABF title, it will likely propel him into the top-10 of the WBC ratings.
The impressive winning streak is not the only reason why many in the 130lb. division are avoiding him, it is also the manner in which he has been notching those victories. Farmer has lightning quick hands, flawless footwork and cat-like reflexes. He mixes his boxing and countering with an aggressive come-forward style, and is not afraid to stand toe-to-toe either. His knockout power is also much better than indicated by his knockout-to-win ratio, as evidenced by his victory over Prescott, in which he dropped the Colombian twice before knocking him out with a single shot in the eighth round. In fact, Farmer’s recent performances have been more and more dominant, and he knows that he has what it takes to not only compete against the elite junior lightweights but also to one day rule the division.
“It’s been a long road to get to this point, but I am nowhere near the end of it,” Farmer continued. “Someone is going to have to pay for all of this hard work, so once I finally get that opportunity to showcase myself against one of these top guys, they are in for a lot of trouble. I deserve my shot. To be where I was, and to come all this way, I deserve an opportunity. Lou DiBella has done a great deal for me, and now it’s time to make a push to get that world title opportunity. Winning this NABF title is a major step in that direction.”
“Tevin Farmer’s story is an inspiring one,” said Lou DiBella, President of DiBella Entertainment. “To bring himself from the brink of becoming a journeyman opponent to now being considered a potential world title challenger is truly remarkable. Having the kind of heart and determination he has continually shown combined with his tremendous skills is a dangerous combination. Winning the NABF title is the first step toward his ultimate goal of becoming a world champion and I will do all I can to get him that opportunity.”
Tickets for the Broadway Boxing event are currently on sale and are priced at $125, $100, $75 and $55. Tables are also available for purchase for this event, with VIP tables going for $1,000 per table (5 seats at $200 per seat), Ringside tables for $500 (5 seats at $100), and $375 tables (5 seats at $75). Tickets are available for purchase by calling the DiBella Entertainment office at (212) 947-2577. Doors open at 6:30pm with the first bout scheduled for 7:00pm.
Website Admin