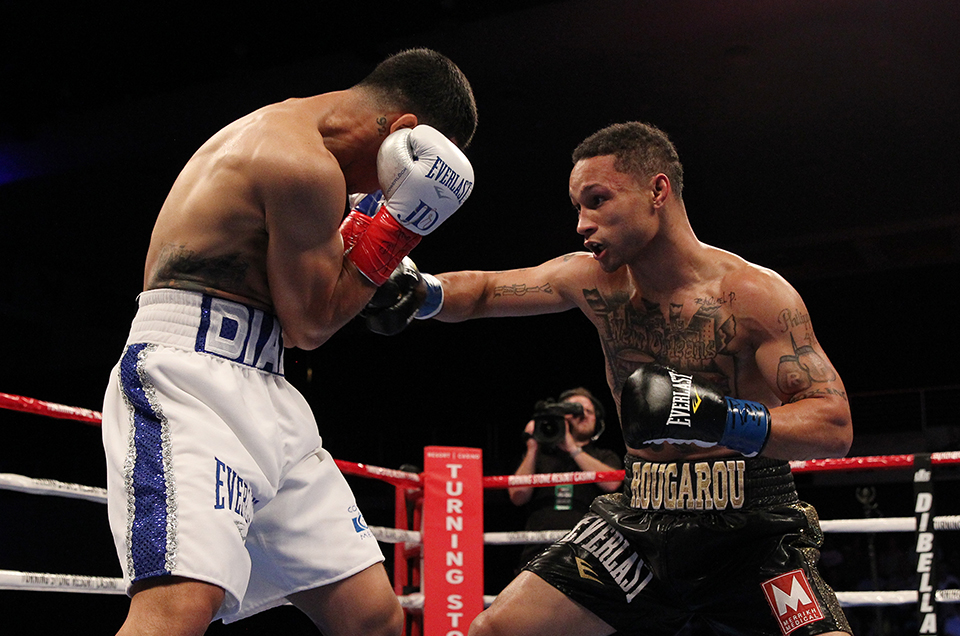 Super lightweight boxing contender Regis Prograis has experience at this kind of a thing, but it’s not the kind of experience one wants to put on a résumé.

The New Orleans native is now a Houston resident, and sadly found himself in the middle of both Hurricane Katrina in 2005 and Hurricane Harvey now.

His family lost its home in Katrina and sought refuge in Houston. And now, the nightmare is playing itself out all over again. Though Prograis’ apartment is safe, he was stuck for four days at his aunt’s home, where his family gathered to watch Floyd Mayweather and Conor McGregor box on pay-per-view.

“Everybody that came over to watch the fight, we all got stranded there,” said Prograis, who is 20-0 with 17 knockouts and in line for a title shot at some point in the near future. “I was there for four days. The lights went off and water was coming into the house. We have a lake behind the yard and once it rolled up 15 feet or something, once that happened, it was kind of the beginning of the end.”

Prograis, 28, was 16 and thought he had seen the end of such disasters when he was forced to evacuate New Orleans in 2005 for Houston. The home owned by his parents took on eight feet of water. His grandmother’s home was submerged by 13 feet of water.

They had to leave just about everything behind and like thousands of others, made the trek to Houston hoping to find a safe place. The memories of his arrival are seared in his mind.

“It was such a stressful time for everyone,” he said of the move from New Orleans to Houston. “It was a lot of standing in long, long lines. There were long FEMA [Federal Emergency Management Agency] Lines; long Red Cross lines. It was a very long and stressful process. I was in high school at the time and I was out of school for quite a while. We were trying to get me back, but it was very rough.”

He said near his home now, there is a lot of water, but he said “it’s manageable. It’s fine, actually.” But just a mile away, cars are submerged in water, which in many cases is up to the roof line.

Before the hurricane hit, Prograis and his family went to a local supermarket, which was the only store in the area opened.

“It took us like four hours to check out because it was the only place we could go and everyone was coming in to prepare themselves,” he said.

Prograis said he’s thankful that no one in his family or anyone that he is friends with died in either hurricane. That doesn’t, however, mean it’s been simple.

There are 300 alligators floating loose that escaped from a local alligator farm. Around the corner from his home, a dog that belonged to a neighbor of his friend was swallowed by an alligator.

“That alligator farm flooded and of course all those alligators got out and so right now, they’re all around,” he said.

He’s had his moments, he admits, when he’s asked “Why me?” Most people never get through one natural disaster like this. He’s living through his second.

It’s extraordinarily trying and his boxing career is now on hold as he simply attempts to survive the chaos and then rebuild his life.

Never, he said, did he expect Houston to face this kind of disaster.

“I would hope this is it as far as [natural disasters] are concerned,” he says, mustering a laugh. “I went through Katrina and now this. I heard on the news that Harvey is considered an 800-year storm. Once every 800 years, there is a storm like this. I’m not even 30 years old and I’ve lived through two of the worst storms in U.S. history.”