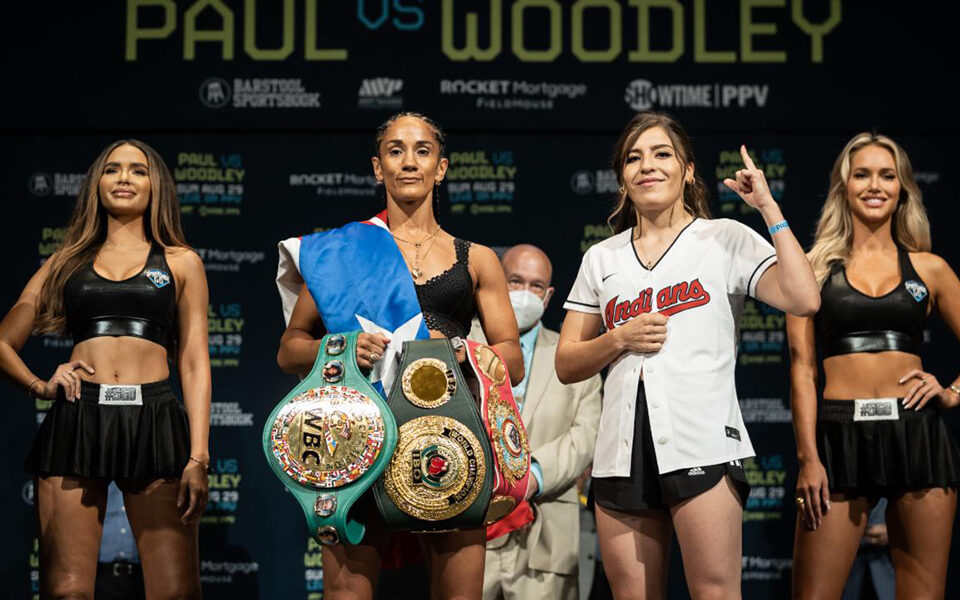 Tomorrow night in Cleveland, OH, three of DiBella Entertainment’s stars will be in action at the Rocket Mortgage Fieldhouse, as part of the highly anticipated Jake Paul-Tyron Woodley event. World champion Amanda Serrano and former world champion Ivan Baranchyk appear on the SHOWTIME Pay-Per-View telecast, and rising 154-pound contender Charles Conwell will look to stay unbeaten in front of his hometown fans.

“Tomorrow night, Amanda Serrano will fight on the biggest stage of her professional career thus far, and she has earned it. Amanda is one of the best fighters in the world, period, and she deserves this opportunity,” said Lou DiBella, President of DiBella Entertainment. “Ivan Baranchyk is one of the most exciting fighters on the planet, in the vein of Arturo Gatti, and tomorrow night ‘The Beast’ will once again electrify the building. Cleveland’s Charles Conwell is one of the biggest talents in the junior middleweight division, so hometown fans will want to arrive early to catch his performance. Thank you to SHOWTIME and Jake Paul for helping to put these elite fighters on such a great platform to display their talent.”

Seven-division world champion Amanda “The Real Deal” Serrano (40-1-1, 30 KOs), of Brooklyn, NY, will defend her WBC, WBO, and IBO featherweight world titles against WBC super bantamweight champion Yamileth Mercado (18-2, 5 KOs), of Chihuahua, Mexico, in the co-featured bout to Paul-Woodley. In her last fight, the Puerto Rican Serrano knocked out IBF super bantamweight champion Daniela Bermudez with a vicious body shot in the ninth round on March 25. Serrano, who has won world titles from super flyweight to super lightweight, is the only female, and only Puerto Rican, male or female, to win world titles in seven weight classes. She has also competed in mixed martial arts, winning her last MMA bout in June via guillotine choke. Mercado captured her WBC 122-pound title on February 6, then made her first defense of that belt on June 26. Both Serrano and Mercado weighed in today at 124 pounds.

Former IBF super lightweight world champion Ivan “The Beast” Baranchyk (20-2, 13 KOs), 141lbs., returns to the ring following his 2020 “Fight of the Year” war against Jose Zepeda last October that produced eight knockdowns within five blistering rounds. He will be facing Cleveland’s undefeated Montana Love (15-0-1, 7 KOs), 140lbs., in a 10-round welterweight bout on the SHOWTIME Pay-Per-View undercard. The Belarus-native Baranchyk, based in Miami, FL, and trained by Pedro Diaz, has become known for his all-action brawling style and displaying the true spirit of a warrior during his seven years as a professional. In Mexican Juan Carlos Rubio (18-0, 9 KOs), 153.5lbs.,

Cleveland’s Charles “Bad News” Conwell (15-0, 11 KOs), 153lbs., will be facing his third undefeated opponent in his last four fights. A 2016 US Olympian who amassed a 132-14 record while becoming an 11-time National champion as an amateur, Conwell last saw action on June 26, defeating Silverio Ortiz via eight-round unanimous decision. Prior to that, Conwell earned back-to-back ninth-round stoppages against the 14-0 Madiyar Ashkeyev in December on NBC Sports Network and 12-0 Wendy Toussaint last October on Showtime’s “ShoBox” series. Tomorrow night, in front of his hometown fans, the popular Conwell will be defending his WBC USNBC and IBF USBA junior middleweight titles in the scheduled 10-round contest.

Baranchyk and Conwell are co-promoted by DiBella Entertainment and Holden Productions, and managed by Split-T Management.