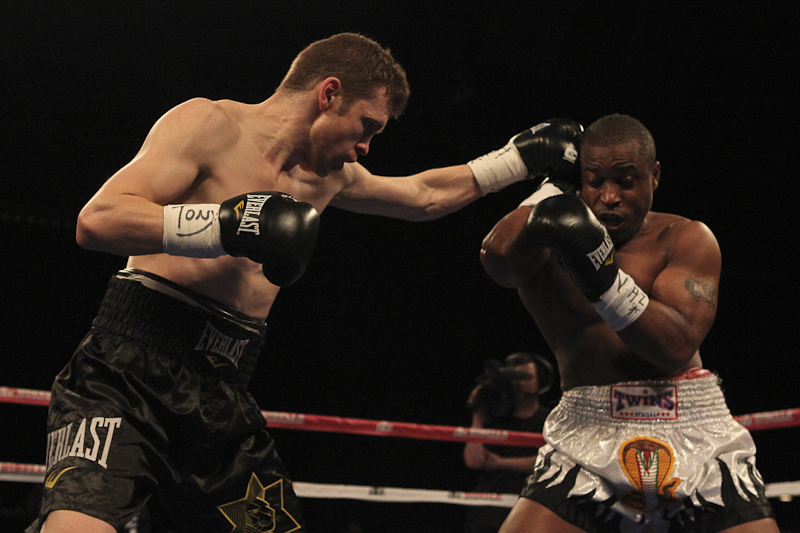 In his second comeback fight, since returning to the ring following a long layoff, Foreman squared off against Gundrick King (18-10, 11KO’s) in a six-round junior middleweight matchup. Foreman masterfully outboxed King over six rounds, en route to winning a unanimous decision. Scorecards read 60-54 across the board. King had no answer for the adept footwork and sly defense of Foreman, who continues his quest for another world title opportunity.

It was a grueling battle, with Del Valle, now trained by Hall-of-Fame trainer Nacho Berstain, getting the better of the exchanges throughout.

In the fifth round, Del Valle really picked up the pace and began landing heavy shots with both hands, forcing the referee to jump in and call the stoppage at 1:32 of the round.

Bracero continuously beat Miranda to the punch, landing flush combinations against the wild and heavy-swinging Miranda. Miranda was able to land a few looping shots through, keeping Bracero on his toes, but ultimately was no match, as Bracero won by scores of 80-72, 79-73, 78-74. Bracero, now 22-1, has been petitioning for a shot at one of the junior welterweight titles for sometime now and called out any of the top 140-pounders in the world following his performance.

The former #1-ranked US amateur Patrick Day was taken the distance for the first time in his young and promising career, scoring a four-round unanimous decision over Yosmani Abreu.

Abreu proved to be a tough opponent, but ultimately the 20-year-old Day was too much, winning by scores of 39-37 across the board. With the victory, Day improved to a perfect 3-0, 2KO’s, while Abreu dropped to 3-7-1.

Heather “The Heat” Hardy stayed perfect, improving her record to 5-0 with a unanimous six-round decision over Mikayla Nebel.

In a rematch of her pro debut, Hardy showed much improvement, boxing beautifully and giving the tough-as-nails Nebel fits. In the end, Hardy was awarded the shut-out decision, winning by scores of 60-53, 60-54, 60-54.

Behind a raucous crowd, Bryant “Peewee” Cruz impressively stopped Antoine Knight at 2:15 of the third round of their scheduled four-round junior lightweight matchup.

The 2012 National Golden Gloves finalist Cruz was the aggressor throughout, landing nice combinations to both the body and head of Knight. Knight hung tough, but Cruz’s relentless attack caused the referee to call a halt to the contest near the end of the third. With the victory, Cruz improves to 3-0, 3KO’s, while Knight dropped to 2-3, 1KO.

Olivares, who improved to 2-0, 1KO, with the victory, hit Williams-Ortiz with everything he had, but somehow, the previously undefeated Williams-Ortiz was able to make it to the final bell.

The Las Vegas native Strayhorn used his superior boxing ability to keep the hard-charging Carrera on the outside, picking his smaller opponent apart from range. In the end, scorecards read 40-36, 39-37, 39-37, all for Strayhorn.

The nine-bout card was promoted by DiBella Entertainment (DBE) and sponsored by Manfredi Auto Group, Newlio.com, and Everlast. The next Broadway Boxing card is scheduled for May 15th at BB King Blues Club and Grill in NYC.