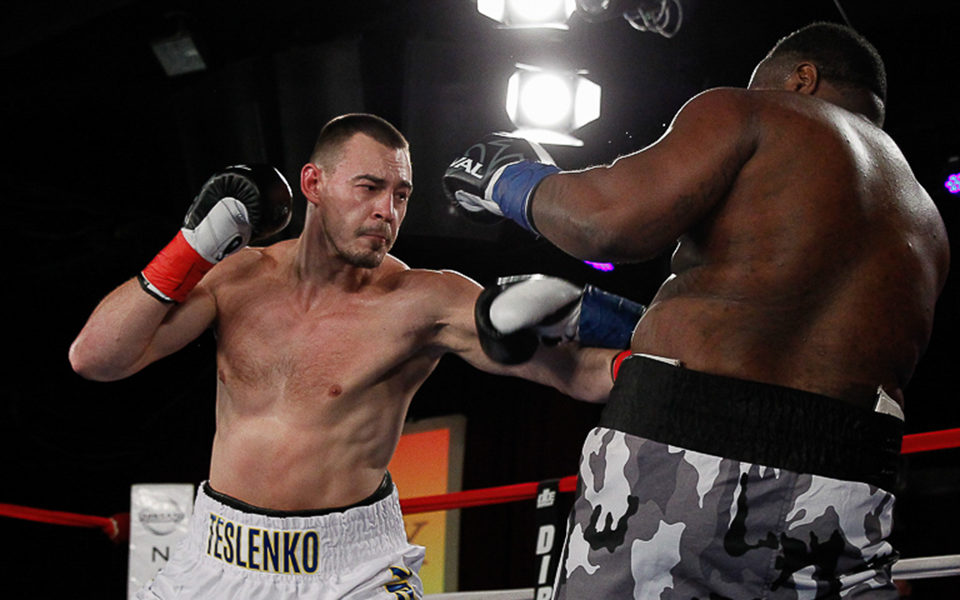 TORONTO, ON (3/28/19) – Heavyweight Oleksandr “Sasha” Teslenko (15-0, 12 KOs) has been on every boxing expert’s watch list for several years. The monstrous power puncher from Ukraine has been making waves in his adopted homeland of Canada and, more recently, in the United States.

On Friday, he’ll have an opportunity to test himself and showcase his strength and skill set against the toughest challenge of his career thus far.

The 26-year-old, who is promoted by DiBella Entertainment (DBE) and managed by Gary Freedman, made noise in 2018 with wins on DBE’s Broadway Boxing series and on the undercard of Stevenson-Gvozdyk. Teslenko scored dominant wins against Edson Cesar Antonio, Avery Gibson, Terrance Marbra and Keenan Hickmon last year working his way up the heavyweight ladder.

With an amateur record of 224-23, Teslenko, a three-time Ukrainian National champion, is considered to be Canada’s-and Ukraine’s-possible best shot at a world heavyweight title in the near future.

“I am looking forward to my fight versus Fabio Maldonado for the WBA NABA heavyweight title,” said Teslenko. “I had an excellent training camp in Montreal with my coach Marc Ramsay which lasted almost nine weeks, complete with terrific sparring and strength and conditioning preparation. I know that Maldonado is a tough veteran with very good stamina, but I want to prove to everyone that I belong among the elite of the heavyweight division. I’d like to thank Lou DiBella, my manager Gary Freedman, and the event’s promoter Lee Baxter for making this fight possible.”

“The Mattamy Athletic Centre is on the same plot of land where Muhammad Ali fought George Chuvalo, so there’s heavyweight history in this establishment. Teslenko is a big hit with the Ukrainian community obviously, but he’s really been adopted by the fans in the Canadian boxing landscape as well. We’re proud to be a part of what should be a major moment in his career,” said Baxter.

As a historical note, not only will this event take place on the same plot of land as Ali-Chuvalo, it is also taking place on the 53rd anniversary of that battle, which Ali won via 15-round unanimous decision, making the third defense of his heavyweight crown onMarch 29, 1966.

“With his amateur background and fundamentals, hard-hitting Ukrainian Oleksandr Teslenko is one of the best young heavyweights out there right now,” said Lou DiBella, President of DiBella Entertainment. “Tomorrow, he will face his toughest test in Fabio Maldonado for the WBA NABA title as he works his way toward a world title shot. I’d like to thank Lee Baxer for giving Teslenko the opportunity to fight in front of his adopted hometown fans in Toronto.”

His opponent, Maldonado, most recently went the distance with top heavyweight contender Oscar Rivas, losing a decision. It is the only blemish on Maldonado’s pro boxing record. Maldonado was previously a top-flight MMA contender, having fought for the UFC for five years, and competed against legends such as Quentin “Rampage” Jackson and Fedor Emelianenko.

In the main event, Stanyslav Skorohod will take on Mexican Super Welterweight champion Jose Luiz Zuniga. Zuniga’s only loss in the past six years has come to blue chip prospect and Commonwealth titleholder Josh Kelly on the road in the UK. Now, he travels to Canada to spoil the return of Skorohod, who proved to be a box office attraction in the Toronto region in 2017. The bout promises to be a tremendous style clash between a hardened Mexican pressure fighter and Skorohod, who himself doesn’t like to take a backward step.

NABA and NABO middleweight champion Patrice Volny will continue to test himself, as he faces the undefeated Nicolas Holcapfel. Holcapfel is an 18-year old prodigy from Slovakia, who has scored knockouts in nine of his 10 professional victories. The Slovakian will be fighting outside of his homeland and Hungary for the very first time in the paid ranks. Volny will look to score a big victory over an undefeated opponent and continue his rise up the middleweight rankings of two different sanctioning bodies.

2012 Olympian Custio Clayton will continue his own march toward a world title, and in doing so, will have to get past former world champion DeMarcus “Chop Chop” Corley, who has fought the best of the best in his career. A veteran of two decades of ring wars against the likes of Floyd Mayweather, Zab Judah and Miguel Cotto, Corley is a dangerous task for Clayton, as he introduces himself to the Toronto boxing market.