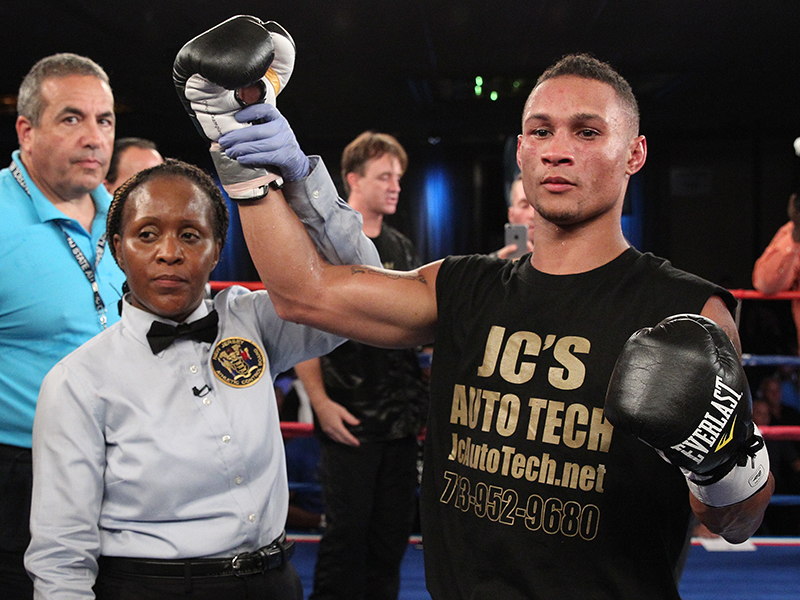 Four Undefeated Boxers Clash in Co-Features: Ivan Baranchyk
Meets Nicholas Givhan, Ivan Golub Faces Marlon Aguas
From Buffalo Run Casino in Miami, Okla.
Live on SHOWTIME® At 10:30 p.m. ET/PT
Tickets on Sale Now
NEW YORK (March 7, 2016) – Unbeaten super lightweight knockout artist and emerging rising star, Regis “Rougarou“ Prograis (16-0, 13 KOs) will meet experienced Aaron “The Jewel” Herrera (29-4-1, 18 KOs) in the 10-round main event of a ShoBox: The New Generation tripleheader on Friday, March 25, live on SHOWTIME (10:30 p.m. ET/PT, delayed on the West Coast) from Buffalo Run Casino in Miami, Okla.
Four undefeated fighters will clash in eight-rounders in co-feature bouts: Hard-hitting Ivan “The Beast” Baranchyk (9-0, 8 KOs), of Brooklyn, N.Y., faces upset-minded Nicholas “King Beamen” Givhan (16-0-1, 10 KOs), of Kalamazoo, Mich., in a super lightweight scrap and Ukrainian Ivan “The Volk” Golub (10-0, 8 KOs, 5-0 in World Series of Boxing), of Brooklyn, N.Y., meets Marlon Aguas (9-0, 6 KOs), of Quito, Ecuador, in a welterweight match.
All but Prograis and Baranchyk will be making their inaugural ShoBox appearances. Click HERE for Prograis and Baranchyk’s Photos – Credit: SHOWTIME.
Tickets for the event promoted by DiBella Entertainment and Tony Holden Productions are priced at $45, $55 and $75 and are available for purchase at buffalorun.com and at stubwire.com.
The 5-foot-9, 27-year-old Prograis, originally from New Orleans, La., but currently residing in Houston, Texas, is an aggressive-minded southpaw who’s making his 2016 debut and third start on ShoBox. Before turning pro in April 2012 he competed in the 2012 United States Olympic Boxing Trials.
In his ShoBox debut on Aug, 17, 2015, he registered an impressive, eight-round decision over previously undefeated Amos Cowart. Prograis, who had won eight straight by knockout going into the Cowart clash, resumed his KO-winning streak with a ninth-round knockout over Abel Ramos last Dec. 11 on SHOWTIME.

“I can’t wait to fight on March 25. I’m ready to put on another great show for the fans and demonstrate how I continue to improve as a fighter,” said Prograis, who was 16 when he turned to boxing after relocating to Houston because of Hurricane Katrina. “I know I have a tough opponent, but I’m ready to go out and perform.

“Aaron Herrera is a rugged veteran and I know there will be some fireworks. I am thankful to my promoter, DiBella Entertainment, and to the network, SHOWTIME, for the opportunity to display my skills and talent.”

Regarding his nickname, Prograis said, “My manager and my dad were just trying to come up with nicknames. Basically, everybody was just shooting out names and they shot out that one – ‘Rougarou’. At first, I didn’t like it, but it stuck with me. A rougarou is like a Louisiana-type swamp monster or werewolf.”
Herrera, 27, of Valladolid, Mexico, a winner of 16 in a row at the outset of a pro career that began in August 2008, has fought some noteworthy opposition. This will be his second fight in U.S. soil. In his stateside debut, Herrera dropped a 10-round decision to undefeated prospect Pedro Campa last Dec. 12.
Besides experience, Herrera has solid skills, movement and hails from a strong family boxing background (his father and grandfather boxed). He’s at his best when he keeps his foes off-balance and can surely outbox them. This will be the 17th consecutive time he’ll be matched against a boxer with a winning record.
“I’m very excited at the opportunity to showcase my talent on the ShoBox series,” Herrera said. “I’ve watched a few fights of Regis on YouTube. He’s a good fighter, but I am a better one. I feel fighting in Mexico has given me the upper hand. Mexican fighters are tough. I have fought better opposition and I’m the more experienced fighter.
“I’ve been looking for an opportunity like this. I need a good breakout fight for the fans to see me in action. I am a proud Mexican fighter and on March 25 the fans will see how real Mexicans fight like, and Prograis will know who Aaron Herrera is. Viva Mexico!”
The highly regarded Baranchyk is making his second eight-round start and second in a row on ShoBox. An offensive-minded fighting machine, he registered a 2:28, first-round knockout over Shadi Shawareb in his most recent start last Dec. 11 on ShoBox.
Baranchyk, of Minsk, Byelorussia, is a former European amateur standout who turned pro in June 2014 and relocated to the United States just a few months after. The 5-foot-7, 23-year-old has won all eight of his U.S. outings, seven by way of knockout, five in the first round.
“I am thrilled to make my second consecutive appearance on ShoBox,” Baranchyk said. “I know that my next opponent will be a test for me, but I will score another exciting victory for the fans.”

His opponent, Givhan, turned pro in August 2012, won his first 15 scraps, boxed a four-round split draw with Freddy Durand on Aug. 22, 2015, and is coming from a majority decision over Juan Santiago last Nov. 13.

The 5-foot-7, 29-year-old fought 14 times in Michigan and one time each in West Virginia, Mississippi and Kentucky. The ultra-confident Givhan is taking a step up in class in Baranchyk, but he’s certainly not in awe of his assignment and is eagerly anticipating the opportunity.

“I am getting my mind ready for war,” said Givhan, whose nickname, “King Beamen,” is a reference to Jamie Foxx’s character from the movie “Any Given Sunday.”
“Training is going great both mentally and physically. I belong on the ShoBox series because they showcase great talent and, false modesty aside, I have great boxing talent. I will feel at home fighting on SHOWTIME and I take this as a great honor to fight on their network.
“My opponent has not fought anyone of my caliber. I know he’s been talking trash, but it won’t matter in the end. He has not had an opponent who can outthink, outshine and outbox him. I am that guy, I am that fighter. The cliché is true: to be the best you’ve got to fight and beat the best. We are both undefeated and this is the kind of a fight that separates the good fighters from the great ones.”
Golub, a six-foot, 27 year-old southpaw, turned pro in November 2012. At the outset of his career, he went 5-0 in the WSOB. He’s gone 10-0 since, winning eight by knockout, including his last four in a row. Golub has recorded five first-round stoppages, including a two-knockdown, 2:41, opening-round TKO over Juan Rodriguez in his most recent effort last Jan. 16 at Barclays Center.
“It is an honor for me to make my national television debut,” Golub said. “Many champions got their start on ShoBox and I am determined to add my name to that illustrious list. My path toward a world title begins on March 25 when I hand Marlon Aguas his first defeat.”
Aguas is making his U.S. and 2016 debut after fighting seven times in Quito, Ecuador and twice in Mexico. A pro since March 2013, he won his initial eight starts and is coming off a first-round knockout over Edwin Gamboa last Nov. 7.
“I’m very excited and grateful to show the world a small country like Ecuador produces amazing fighters,” Aguas said. “Boxing is my life and I plan on making a statement in my U.S. debut.”
Barry Tompkins will call the ShoBox action from ringside with Steve Farhood and former world champion Raul Marquez serving as expert analysts. The executive producer is Gordon Hall with Rich Gaughan producing and Rick Phillips directing.
# # #
About ShoBox: The New Generation
Since its inception in July 2001, the critically acclaimed SHOWTIME boxing series, ShoBox: The New Generation has featured young talent matched tough. The ShoBox philosophy is to televise exciting, crowd-pleasing and competitive matches while providing a proving ground for willing prospects determined to fight for a world title. Some of the growing list of the 65 fighters who have appeared on ShoBox and advanced to garner world titles includes: Andre Ward, Deontay Wilder, Erislandy Lara, Shawn Porter, Gary Russell Jr., Lamont Peterson, Guillermo Rigondeaux, Omar Figueroa, Nonito Donaire, Devon Alexander, Carl Froch, Robert Guerrero, Timothy Bradley, Jessie Vargas, Juan Manuel Lopez, Chad Dawson, Paulie Malignaggi, Ricky Hatton, Kelly Pavlik, Paul Williams and more.
CONTACTS:
DiBella Entertainment: (212) 947-2577
Tony Holden Productions: holdenboxing@cox.net
Chris DeBlasio, Showtime Networks Inc.: (212) 708-1633
Matt Donovan, Showtime Networks Inc.: (212) 708-1663
Flo Jocou, Showtime Networks Inc.: (212) 708-7319
John Beyrooty/BZA/Showtime: (562) 233-7477
Media Credentials: Please E-mail holdenboxing@cox.net
Website Admin