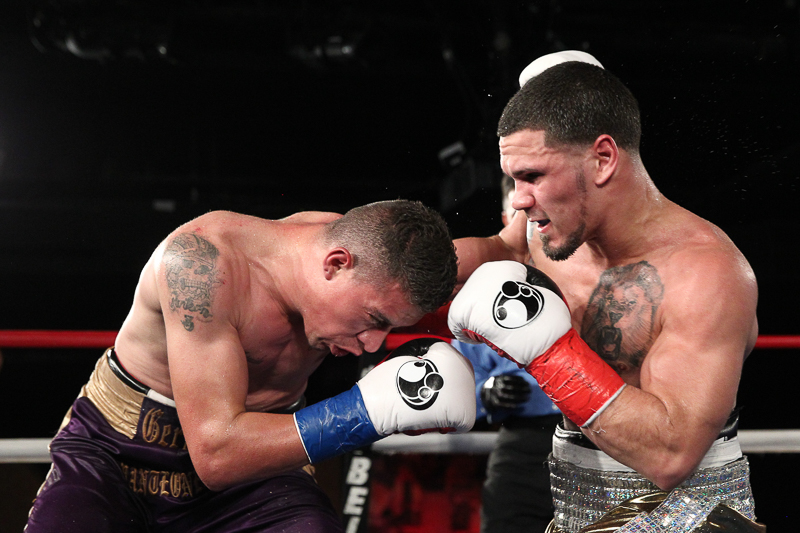 New York, NY (1/20/15) – Next Wednesday, January 27th, DiBella Entertainment’s ever-popular Broadway Boxing series returns to the famed B.B. King Blues Club and Grill in midtown Manhattan with an exciting nine-bout card. Headlining the event will be fast-rising super bantamweight contender Luis Rosa (21-0, 10KO’s) as he puts his undefeated record and world-rating on the line against tough Mexican veteran German Meraz in an eight-round junior featherweight matchup. Also appearing on the card in separate eight-round feature bouts will be undefeated prospects Louis Cruz (11-0, 5KO’s) and former Olympian Lenin Castillo (12-0-1, 7KO’s).
Patterson, New Jersey’s undefeated middleweight prospect Ian Green (8-0, 6KO’s) will also see action when he squares off against Queens-native Devaun Lee (5-2, 2KO’s) in a six-round middleweight attraction.
The 24-year-old Puerto Rican and New Haven, CT, resident Rosa had a breakout year in 2014, kicking it off with an impressive and dominant eight-round unanimous decision over the once highly regarded Jorge Diaz in Rosa’s national TV debut on ESPN “Friday Night Fights”. Rosa followed up that performance notching an even more impressive victory on his resume when he decisioned former amateur standout, and highly-rated contender Orlando Del Valle (18-1) in May of that year, in a bout broadcast on HBO Latino. Rosa kept things rolling nicely in 2015, going a perfect 4-0, 3KO’s, including a stoppage victory over longtime perennial contender Jonathan Perez in Rosa’s second appearance on the ESPN network in May. Rosa is currently ranked #12 in the WBC world ratings and is expected to continue moving up the ladder of the super bantamweight division this year, as closes in on challenging for his first world title in the not so distant future.
A former National champion who competed at the 2012 US Olympic trials, Bronx’s Louis Cruz is one of the truly bright young stars on the loaded DBE stable. Cruz kept an active pace over his first two-plus years as a pro, quickly moving to 10-0 before a hand injury and subsequent surgery forced him to sit on the sidelines after his last bout in December of 2014. Cruz returned to action on October 7th, showing absolutely no ring rust and winning a dominant eight-round unanimous decision. An opponent for Cruz will be announced shortly, as he looks to kick off his 2016 in impressive fashion and move his record to a perfect 12-0.
A 2008 Olympian for his native Dominican Republic, the 27-year-old Castillo is coming off an entertaining eight-round majority draw to fellow undefeated and highly regarded prospect Travis Peterkin in August. Castillo is determined to impress and put his promising career back into the win column.
The remainder of the card, including opponents for Cruz and Castillo, will be announced shortly.
Tickets for the Broadway Boxing event are currently on sale and are priced at $125, $100, $75 and $55. Tables are also available for purchase for this event, with VIP tables going for $1,000 per table (5 seats at $200 per seat), Ringside tables for $500 (5 seats at $100), and $375 tables (5 seats at $75). Tickets are available for purchase by calling the DiBella Entertainment office at (212) 947-2577. Doors open at 6:30pm with the first bout scheduled for 7:00pm.
For additional information, you can visit www.dbe1.com, follow us on Twitter @loudibella @DiBellaEnt or like our fan page on facebook/DiBellaEntertainment.
Website Admin