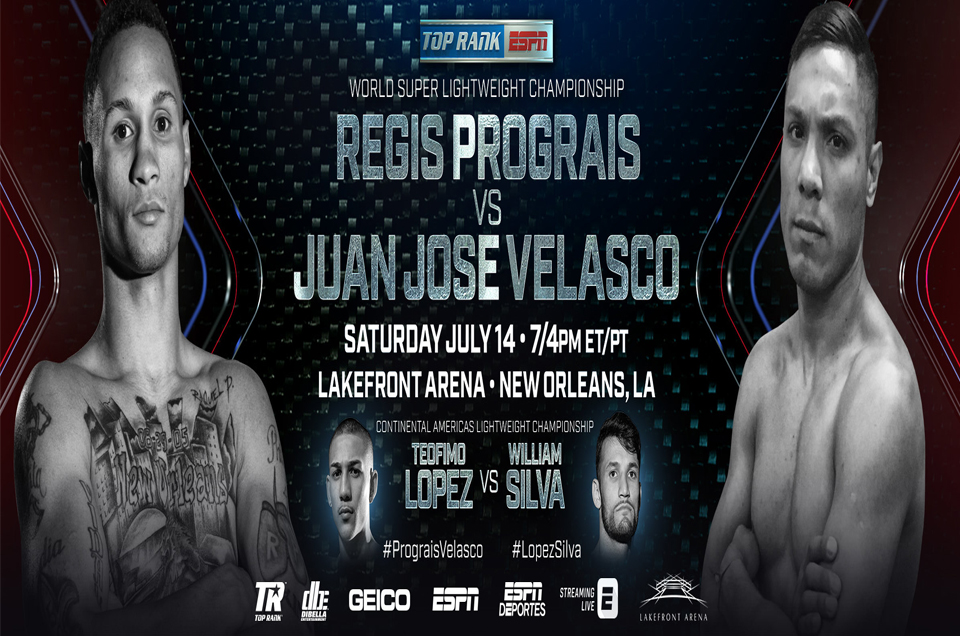 Lakefront Arena, New Orleans, LA
Saturday, July 14
New York, NY (June 26, 2018) – New Orleans-based undefeated heavyweight prospectJonathan Guidry (10-0, 2 KOs) will face Aaron Chavers (8-4-1, 3 KOs), of Oklahoma City, OK, in a six-round clash Saturday, July 14, at Lakefront Arena in New Orleans.
Presented by Top Rank, in association with DiBella Entertainment, Guidry vs. Chavers will be a featured undercard fight to the highly anticipated main event between WBC interim super lightweight champion Regis “Rougarou” Prograis, of New Orleans, and undefeated challengerJuan Jose Velasco, of Argentina, with the WBC Diamond super lightweight belt at stake.Prograis vs. Velasco and Teofimo Lopez vs. William Silva will be televised live on ESPN and ESPN Deportes at 7 p.m. ET, while the undercard, including Guidry vs. Chavers, will be broadcast on ESPN+ beginning at 4:30 p.m. ET.
Tickets, priced at $200 (ringside), $125 (floor), $75 and $40, can be purchased in advance at the Lakefront Arena box office, Ticketmaster.com and charge by phone at 800-745-3000. Discounts for military, students and the New Orleans Police Department members – $75 tickets for $50 and $40 seats for $25 – are available when presenting valid ID at the UNO box office.
A native of Dulac, Louisiana, the 28-year-old Guidry comes from a family of professional and amateur boxers. Starting as an amateur at the age of 14, the high school football standout compiled a record of 38-8, highlighted by winning the Ringside World Tournament.
Guidry made his professional debut on April 11, 2014, with a first-round knockout of Roosevelt Hudson. Trained and managed by the team of Les Bonano and Jonathan Liberto, Guidry has become one of the most popular fighters in the state of Louisiana and is coming off a second-round knockout of Lemarcus Tucker on June 2, in Metairie, LA.
The upset-minded Chavers looks to bounce back into the win column following a battle with Niall Kennedy on February 24.
CONTACTS:
Top Rank
Evan Korn:  516-510-6014 / ekorn@toprank.com
Gardy Lopez: 787-246-3668 / glopez@toprank.com