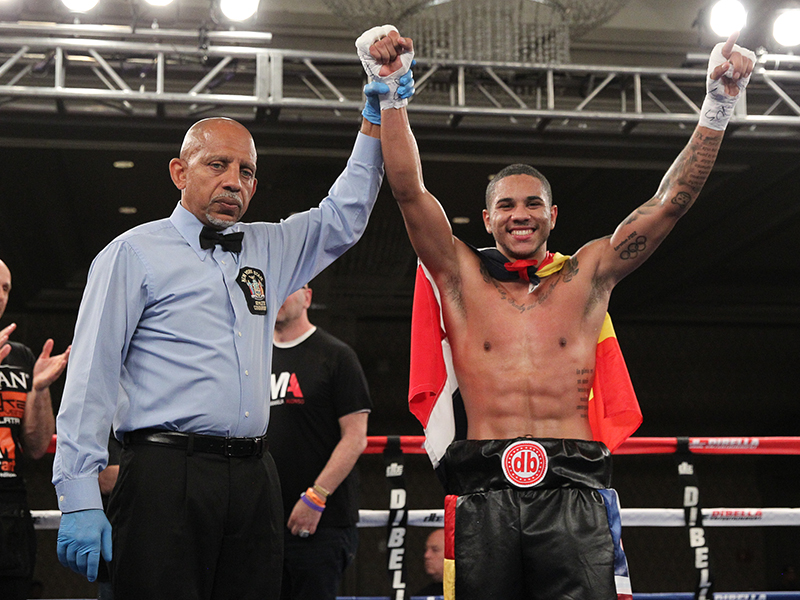 New York, NY (9/19/16) – DiBella Entertainment’s (DBE) undefeated former Olympians Lenin Castillo and Jonathan Alonso picked up impressive victories over the weekend in the Dominican Republic. The light heavyweight Castillo (15-0-1, 10KO’s) scored a second-round KO over Colombian Jose Miguel Torres (31-9, 27KO’s) while the super lightweight Alonso (11-0, 4KO’s) pounded out an eight-round unanimous decision over Venezuelan Jherson Perez (5-3, 3KO’s).
For the Spaniard Alonso, who was born and raised in the Dominican Republic but represented Spain in the 2012 Olympic Games, it was a triumphant homecoming, having only fought in Spain and the US since turning pro in 2014. Alonso, who now lives and trains full-time in Brooklyn, has shown steady improvement throughout his first two years as a pro, and will be looking to keep a busy pace as he continues to move up the ranks of the talented 140lb. division. He is expected to return stateside for his next bout before the end of the year.
A 2008 Dominican Olympian, Castillo turned pro in 2010 and quickly moved to a perfect 11-0 by 2013, before his career was sidelined due to promotional issues. Castillo, who splits his time living and training between the Dominican Republic and Brooklyn, signed with DBE in 2015 and his career is now back on track. The lone blemish on his record came against fellow undefeated prospect Travis Peterkin (16-0-1) at Barclays Center in August of last year. Since the bout against Peterkin, Castillo has scored back-to-back-to-back stoppage victories and will be looking to secure a lucrative bout in the loaded light heavyweight division in early 2017.
Website Admin