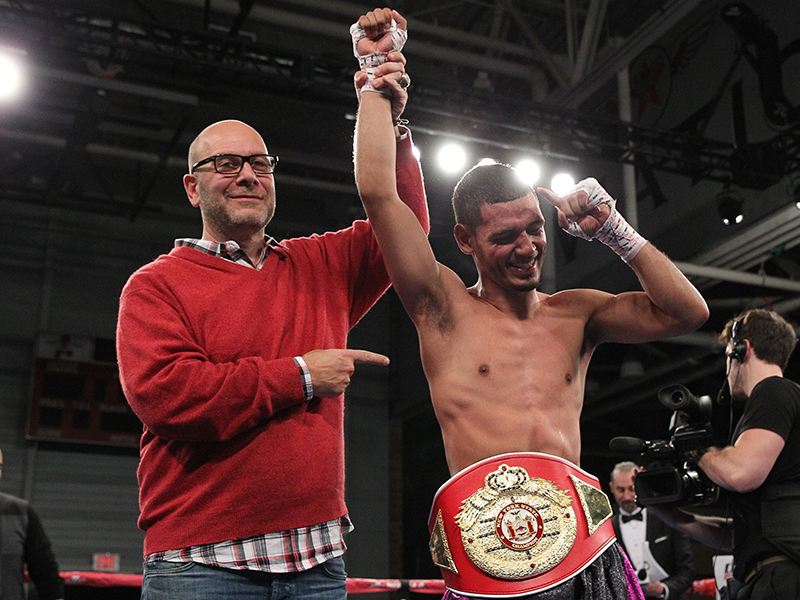 WEDNESDAY, MARCH 30TH AT THE FAMED B.B. KING BLUES CLUB AND GRILL – NYC
New York, NY (3/8/16) – On Wednesday, March 30th, DiBella Entertainment’s Broadway Boxing returns to the famed B.B. King Blues Club and Grill in midtown Manhattan. In the main event bout of the evening, former friends, and now crosstown rivals, Chris Galeano (10-0, 1KO) and DeVaun Lee (6-2, 3KO’s) will battle it out for New York bragging rights as well as Galeano’s New York State (NYS) middleweight crown when the two meet in a scheduled 10-rounder.
“I am stoked about being the headliner again, my second consecutive headlining bout on a Broadway Boxing card,” stated Galeano. “I am excited about defending my New York State title that I won back in November, now under the bright lights of Times Square at the famed B.B. King Blues Club. My team and I are working efficiently and have all the intentions of coming away with another victory on March 30th. I plan on not only winning, but winning impressively, as I continue to move up the ladder of the middleweight division and onto bigger and better things for my career.
“This is a huge fight for me and my career. That being said, it is just the beginning. Once I get past this fight, I know that my career is going to start to slowly take off. For me, this fight is about making a statement. I am not only making a statement to myself, but to the rest of the up-and-coming middleweights in the New York area as well as in all of boxing.”
The Bronx-native Galeano was a two-time NY Golden Gloves champion as well as the #1-rated 165-pounder in the US before turning pro in 2013. The 23-year-old southpaw is a gifted boxer, and has shown steady improvement throughout his first 10 bouts as a pro. Galeano is coming off his most impressive victory to date via a dominant 10-round unanimous decision over fellow unbeaten prospect and New York-native Shawn Cameron this past November. The victory by Galeano awarded him the NYS middleweight title and cemented himself as one of the top up-and-coming New Yorkers in boxing.
Immediately following Galeano’s victory, the Queens-native Lee, a two-time Metro champion and three-time NY Golden Gloves finalist, who was in attendance that night, began calling for a shot at Galeano’s crown. Galeano and Lee have been friends for years, both came up through the amateur ranks at the same time and have served as sparring partners for one another on many occasions. The back-and-forth between the two continued on social media over the ensuing months. Finally, after Lee earned his most impressive victory, defeating the previously unbeaten Ian Green by unanimous decision on January 27, the bout against Galeano was arranged.
“This is a great fight for Broadway Boxing and a great fight for New York,” said Lou DiBella, President of DiBella Entertainment. “This is what the series has been built on, great local matchups featuring New York prospects fighting one another on their way up the rankings. Galeano and Lee developed in the amateurs together, have sparred countless times, and are now fighting each other in what is the most important matchup of their young careers.”
Tickets for the Broadway Boxing event are currently on sale and are priced at $125, $100, $75 and $55. Tables are also available for purchase for this event, with VIP tables going for $1,000 per table (5 seats at $200 per seat), Ringside tables for $500 (5 seats at $100), and $375 tables (5 seats at $75). Tickets are available for purchase by calling the DiBella Entertainment office at (212) 947-2577. Doors open at 6:30pm with the first bout scheduled for 7:00pm.
Website Admin