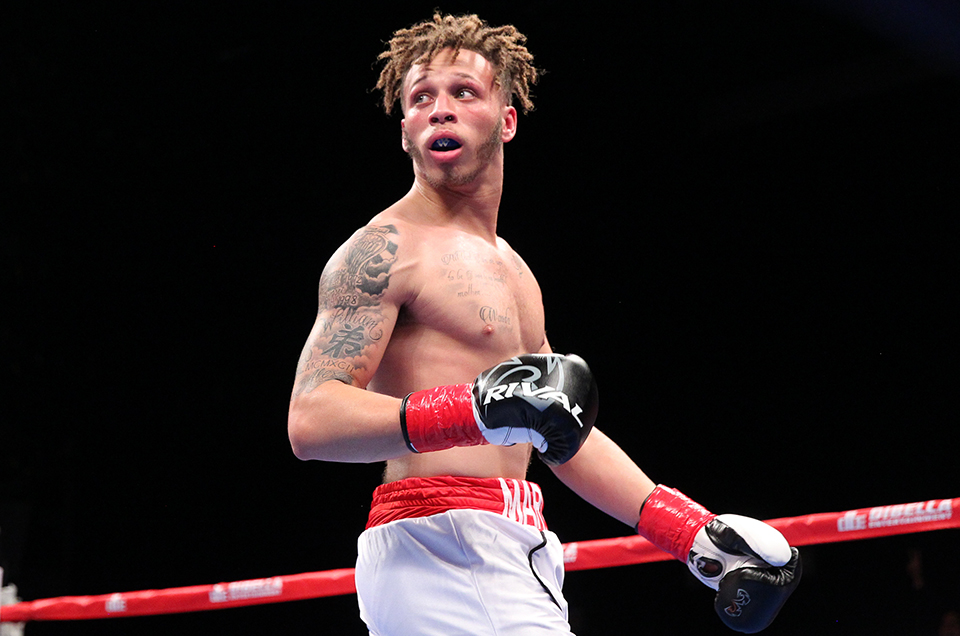 New York City (September 11, 2017) Popular New England fan favorite “MARVELOUS” MYKQUAN WILLIAMS (7-0, 4 KOs), of East Hartford, Connecticut, will return against battle-tested EVINCII DIXON, of Lancaster, Pennsylvania, over six rounds this Friday night, September 15, at Foxwoods Resort Casino, fighting on the acclaimed “Broadway Boxing”series presented by DIBELLA ENTERTAINMENT.
Just 19 years old, the all-action Williams, guided by the legendary JACKIE KALLEN, will be making his seventh start at the legendary venue, home to decades of boxing’s most epic battles.
“I’ve been training at my home gym, Manchester ROCS Boxing Club, with my trainer Paul Cichon for this fight. My main sparring partner has been Matt Remillard. He’s been a huge help to me while I work on different things.
“I actually got started in boxing at the age of seven when I went to the Manchester P.A.L. with my aunt and watched her train. Her name is Adelita Irrizarry. Once I saw her fight I was hooked.
“I was a five-time national champion in the amateurs, but always felt my style was more suited for the professional ranks. I had accomplished everything I wanted to as an amateur so I turned professional.”
Williams turned professional 10 days after his eighteenth birthday celebrating with a first-round knockout of Dean Walsh on April 16, 2016, at Foxwoods Resort Casino.
“I’m thrilled with the way my professional career is going. Everybody on my team has done a terrific job.
“I love fighting at Foxwoods. I always get a wealth of fan support there. It truly feels like home.
“I want to have a career like Terence Crawford or Floyd Mayweather, fight the best and beat the best. Friday night is another chance to put on a great performance for the fans as I aspire to be like those two.”
Tickets for the event, promoted by DiBella Entertainment in association with Murphys Boxing and presented by Nissan of Queens, Azad Watches, OPTYX, and Christos Steak House, are priced at $125, $75 and $45, and can be purchased online at Foxwoods.com,Ticketmaster.com, by calling 800-200-2882, or visiting the Foxwoods box office. Foxwoods Resort Casino is located at 350 Trolley Line Boulevard, Mashantucket, Connecticut 06338. Doors will open to the Fox Theater at 7:00 p.m. ET with the first bell at 7:30 p.m. ET.
Headlining the night of action in a 10-round heavyweight battle of local rivals, ALEXIS SANTOS (18-1, 15 KOs), of Lawrence, Massachusetts, clashes with Ireland’s NIALL KENNEDY (8-0, 5 KOs), fighting out of Boston, Massachusetts.
Co-promoted by DiBella Entertainment and Fight Promotions Inc., middleweight contender IEVGEN “THE UKRAINIAN LION” KHYTROV (14-1, 12 KOs), of Brooklyn, New York, battles upset-minded specialist DERRICK “SUPERMAN” FINDLEY (27-21-1, 18 KOs), of Gary, Indiana, over eight rounds in the co-main event.
In a special feature attraction women’s eight-round junior lightweight battle, SHELLY “SHELITO’S WAY” VINCENT (19-1, 1 KO) squares off against ANGEL “NONSTOP” GLADNEY(9-12-1, 6 KOs).
Junior middleweight prospect HURSHIDBEK NORMATOV (3-0, 1 KO), born in Uzbekistan now living in Brooklyn, New York, co-promoted by DiBella Entertainment and Fight Promotions Inc. and managed by David McWater’s Split-T Management, will compete in a scheduled six-rounder.
Additional information on the undercard will be announced shortly.
Broadway Boxing is presented by Nissan of Queens, Azad Watches, OPTYX, and Christos Steak House.
SOCIAL MEDIA
Twitter
@DiBellaEnt
@LouDiBella
@FoxwoodsCT
@MarvelousMyke
MEDIA CREDENTIALS: www.dbe1.com/credentials
MEDIA CONTACT
Bernie Bahrmasel
Double B Publicity
Phone: + 1 773 -592-2986
Email: BernieBahrmasel@yahoo.com
Twitter: @BernieBahrmasel
Website Admin