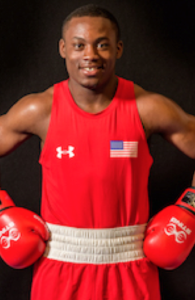 New York, NY/Miami, OK (4/21/17) – Tonight at Buffalo Run Casino, in Miami, OK, US Olympian Charles Conwell makes his much-anticipated pro debut, as part of an event promoted by Holden Productions and DiBella Entertainment. Although the contracted weight limit was 157 pounds, Conwell weighed in at a trim and ready 154 pounds, hungry to prove that he is serious about becoming a force in the junior middleweight division.

Conwell, of Cleveland, OH, comes from a boxing family, as he and all eight of his siblings were enrolled in the sport at a young age by their father Charles Sr. A highly accomplished amateur who represented the United States in the 2016 Olympics in Rio, Conwell amassed an impressive record of 132-14 and was also an 11-time National champion. Co-promoted by DiBella Entertainment and Holden Productions, and managed by David McWater’s Split-T Management, the 19-year-old Conwell is anxious to test his fan-friendly style in the pro ranks.

“I’m really looking forward to making my pro debut. I’ve been training at Soul City Boxing Club in Toledo, OH, working on my speed and power, and getting sparring from all different styles. I know I’ll have to be ready to adjust to anything as I progress,” said Conwell, now a member of Holden Productions’ Four State Franchise. “I’m very grateful for the team I have behind me. With my promoters DiBella Entertainment and Holden Productions and my manager David McWater, I know that my career is in good hands and that I will become a world champion with them guiding me along the way. A lot of great fighters have come out of Cleveland and I am determined to continue that legacy.”

“Tonight is the start of a very bright career for Olympian Charles Conwell,” said Lou DiBella, President of DiBella Entertainment. “He has the charisma and talent to become a true star in the sport. By weighing in at 154 pounds when the contracted limit was 157 shows me just how dedicated he is to achieving his dream. He had great success as a middleweight amateur; he will be even stronger and more dominant at 154.”

Headlining tonight’s event, promoted by Holden Productions and DiBella Entertainment, is Australian Billel “Baby Face” Dib (21-1, 10 KOs) facing Cleveland’s Yuandale Evans (18-1, 14 KOs) in a 10-round bout for the vacant WBA-NABA junior lightweight title. Both Dib and Evans weighed in at 130 pounds. Conwell’s half-brother Isaiah Steen (6-0, 5 KOs), who weighed in at 164 pounds, also fights on the card.

ABOUT DIBELLA ENTERTAINMENT
In May of 2000, Lou DiBella launched DiBella Entertainment (DBE), a full-service sports and entertainment company, which has become one of the most successful promotional entities in boxing. Serving as matchmaker, television distributor, marketing advisor, and promoter, DiBella has developed an exciting stable of championship caliber, world-class fighters. DBE clearly established itself as an industry leader with the successful launch of its monthly-televised “Broadway Boxing” series in April 2004. Prior to becoming a promoter, DiBella held an 11-year tenure as the Senior Vice President of HBO Sports. He is also a well-known fixture in the film industry, having worked as an Executive Producer for the film “Love Ranch”, as an Associate Producer on “The Fighter”, and making his acting debut in “Rocky Balboa”. The President and Managing General Partner for the Richmond Flying Squirrels baseball team, DiBella proudly wears his 2010, 2012 and 2014 World Series rings, as his team is the class AA affiliate to the San Francisco Giants. In 2014, DiBella was inducted into the New York State Boxing Hall of Fame.

ABOUT HOLDEN PRODUCTIONS
Tony Holden, a former television producer, started in boxing in 1990 when he formed Holden Productions. Holden has promoted numerous world champions and stars, some of whom started their careers under his wing. They’ve fought on all of the major television outlets, both domestically and internationally. Currently, Holden Productions’ “Four State Franchise” is a major draw at the Buffalo Run Casino and their cards are always sold out. Current and former fighters include boxing greats Tommy Morrison, Johnny Tapia and Prince Naseem Hamed, Joe Mesi, Olympian Zahir Raheem as well as Trey Lippe-Morrison, and Ivan Baranchyk, among others.