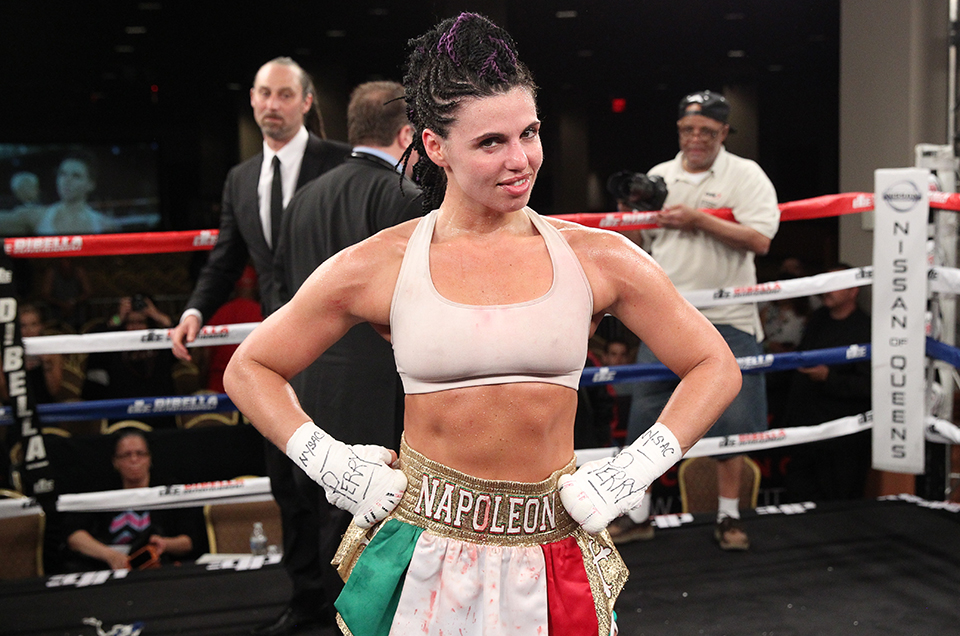 New York, NY (November 16, 2018) WBA Super Middleweight World Champion Alicia “The Empress” Napoleon (10-1, 5 KOs) is staying busy during the holiday season. In addition to operation the two highly successful Overthrow Boxing Gyms in New York City and Brooklyn, she is also training for a February 2019 return to battle for her second world title defense.
This Monday night, November 19, Napoleon will serve as a boxing judge for the annual Long Island Fight for Charity Event, the nation’s only all-volunteer charity boxing event. The event takes place at the Hilton Long Island in Melville, NY. For more information and tickets, visit their website at www.LIfightForCharity.org.
On Sunday, December 9, Napoleon will be honored by Ring 8 as the New York State Female Fighter of the Year at their annual Holiday Awards Ceremony. The ceremony will take place at Russo’s on the Bay in Howard Beach, NY. More information can be found on their website, www.Ring8ny.com.
“It’s been a fantastic year, so much has happened personally and professionally. I won my first world title in March and defended it in August plus I got married to the man of my dreams,” said Napoleon. “I love working with different charities throughout the year and am honored to be part of the Long Island Fight for Charity Event. Also, being recognized by Ring 8 with their Fighter of the Year award is a great personal accolade and a wonderful way to cap off the year.”
—————————————–
Born into an Italian family of artists and entrepreneurs in 1986, Alicia Napoleon was introduced to boxing in her late teens. “I started boxing because as a young child, girls weren’t allowed to participate in certain sports. When I realized I was limited because I was a girl, it struck a nerve, and naturally I became a fighter in more ways than one.”
Napoleon began training at age 18 in Manorville, NY, and attended her first competition at 20 years old. As an amateur, she competed for nine years, winning 11 amateur titles nationally, including two New York Golden Gloves championships and a National Golden Gloves title.
Boxing becoming one of the most influential foundations of her life, Napoleon embraced the sport wholeheartedly as it molded her into not only a world champion but a stronger, more confident, fearless and passionate woman today.
Finding her purpose and embracing the process of becoming a champion has led Napoleon down a path to fight for equal opportunity, unity, love, self-worth, and selflessness in the world. In the ring, she fights to stay a champion and leave a legacy of hope to all those that follow her to realize that they too can conquer all that their heart desires. “Dreams do come true, it just takes a little blood, sweat, and tears to get there, and that’s okay. Increase your faith by believing in what you’re meant to do. Never give up.”
Career Achievements/Titles:
● WBA Super Middleweight World Title 2018
● Signed with DiBella Entertainment
● WBC Silver Super Welterweight World Title 2016
● Asics “I Move Me” 2018 Campaign
● Allure Magazine/StyleLikeU Video Feature Dispelling Beauty Myths | “What Makes This Muscular Woman Feel Sexy”
● Elle.com Feature with L’Oreal Skincare
● Featured on Pickler & Ben Morning Show
● Co-owner of Overthrow Boxing Gym
Social Media:
● Instagram: @boxingnapoleon
● Facebook: Alicia “The Empress” Napoleon
Media Contact
Bernie Bahrmasel
Double B Publicity
Email: BernieBahrmasel@yahoo.com
Phone: + 1 773 592-2986
Twitter: @BernieBahrmasel
DiBella Entertainment
www.DBE1.com
Facebook.com/DiBellaEntertainment
Twitter: @LouDiBella, @DiBellaEnt