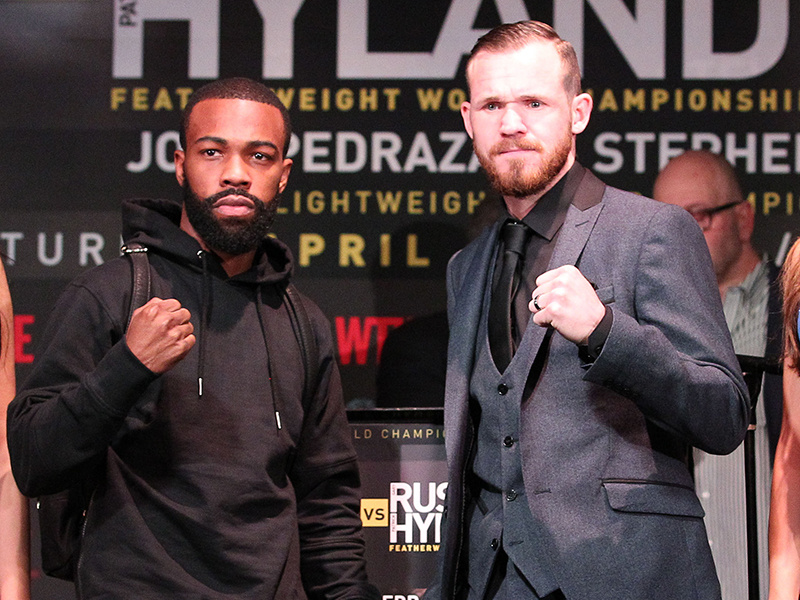 Russell Jr. (26-1, 15 KOs) will be making the first defense of his featherweight world title that he earned after stopping defending champion Jhonny Gonzalez in the fourth-round last March. He was set to defend last November, but was forced to withdraw due to a training injury. If he can get by the extremely motivated Hyland (31-1, 15 KOs), Russell Jr. is in line for big fights with fellow champions and top contenders such as Leo Santa Cruz, Lee Selby, Abner Mares and Carl Frampton.

“I’m excited about being back in the ring,” said Russell. “It’s been a year because of an injury, but I’m feeling great and more ready than ever. I’ll be prepared for anything. I’m looking forward to meeting Mr. Hyland on the 16th and I’m ready to prove I’m the best featherweight in the world.”

“This is a fantastic opportunity to fight for the WBC title, one of the belts that I’ve always wanted to hold,” said Hyland. “It means the world to me to be fighting for this title against a real champion like Gary Russell Jr. I think he’s a great fighter who does everything well so I have to be at my best on fight night. But I know I can beat him and take that belt home to Ireland. I’m just a lad from Jobstown in Tallaght who works hard and loves the fight game. I’ve been trained all my life by my father, may God rest him, and to win a world title will make all of his hard work and effort worthwhile.”

Pedraza (21-0, 12 KOs) won his 130-pound world title last June when he dominated Andrey Klimov to capture the vacant belt, and he successfully defended it last October in an exciting battle against Edner Cherry. Both bouts aired on SHOWTIME. Now he faces the mandatory challenger in Smith (23-1, 13 KOs), who has won 11 straight bouts and may present the toughest challenge of Pedraza’s burgeoning career.

“I am in excellent condition, had an extraordinary training camp and am anxious to demonstrate my skills in the ring on April 16,” said Pedraza. “I am truly looking forward to entertaining the fans in attendance and remaining undefeated as I defense my crown against Smith. I am determined to become the next big star out of Puerto Rico.”

“I’ve waited a long time for this opportunity, but the timing couldn’t be better,” said Smith. “I’m excited to get the opportunity to win the world title live on Sky Sports in the UK and on SHOWTIME in America. Pedraza is a quality fighter but I know I will do whatever is needed to become world champion on April 16 and I can’t wait.”

Tickets for the live event, which is promoted by DiBella Entertainment, are priced at $150, $90 and $45 not including applicable service charges and taxes and are on sale now. Tickets are available at www.ticketmaster.com and www.foxwoods.com or by visiting the Foxwoods’ Box Office. To charge by phone call Ticketmaster at (800) 745-3000. The Pedraza vs. Smith bout is promoted in association with Gary Shaw Productions, Universal Promotions and Matchroom Boxing.

“This SHOWTIME doubleheader is a can’t-miss event,” said Lou DiBella, Presidentof DiBella Entertainment. “In Russell-Hyland, you have one of the most gifted fighters in all of boxing defending his title against a hungry and tough-as-nails Irishman in the biggest fight of his career. Pedraza is looking to make a statement against Smith, Britain’s number one contender, and to follow in the footsteps of past Puerto Rican superstars.”

A speedy and supremely talented boxer, Russell Jr., was impressive in his fourth-round stoppage of the battle-tested Gonzalez last March. The 2008 U.S. Olympian had scored important victories over Vyacheslav Gusev, Juan Ruiz, and Miguel Tamayo before losing a majority decision to Vasyl Lomachenko for the WBO 126-pound title in June 2014. The southpaw, of Capitol Heights, Md., was able to return to his winning ways with a unanimous decision over Christopher Martin that December prior to his coronation against Gonzalez, whom he dropped three times en route to capturing the title.

Leading into his last fight on Oct. 10, in Lowell, Mass., Ireland’s Hyland was dealing with heavy emotions following the death of his beloved father and longtime trainer, and the birth of his first son. The 32-year-old remained steadfast, fighting in memory of his father to stop David Martinez in the eighth round. It was his fourth consecutive victory since suffering his lone defeat, a close and competitive loss to the unbeaten Javier Fortuna for the interim WBA World Featherweight Title in December 2012. Now, presented with another world title opportunity, Hyland seeks to honor his father’s legacy by bringing the championship back home.

The switch-hitting former Puerto Rican Olympian Pedraza backed up his “The Sniper” moniker against Klimov as he picked apart the Russian with superior speed and accuracy on his way to a world title. Pedraza earned a shot at the title in his previous bout with a career-best win over former world title challenger Michael Farenas. The 26-year-old will have title unification on his mind if he can conquer his mandatory opponent on April 16.

Part of a fighting family, Smith’s brothers Callum, Liam and Paul all fight professionally at a high level and he hopes to join Liam as a fellow world champion on April 16. The 30-year-old has fought professionally since 2008 and his only blemish came against featherweight world champion Lee Selby in 2011. Smith earned his title shot with a sixth-round stoppage of Devis Boschiero in September 2015 and will be making his U.S. debut at Foxwoods.