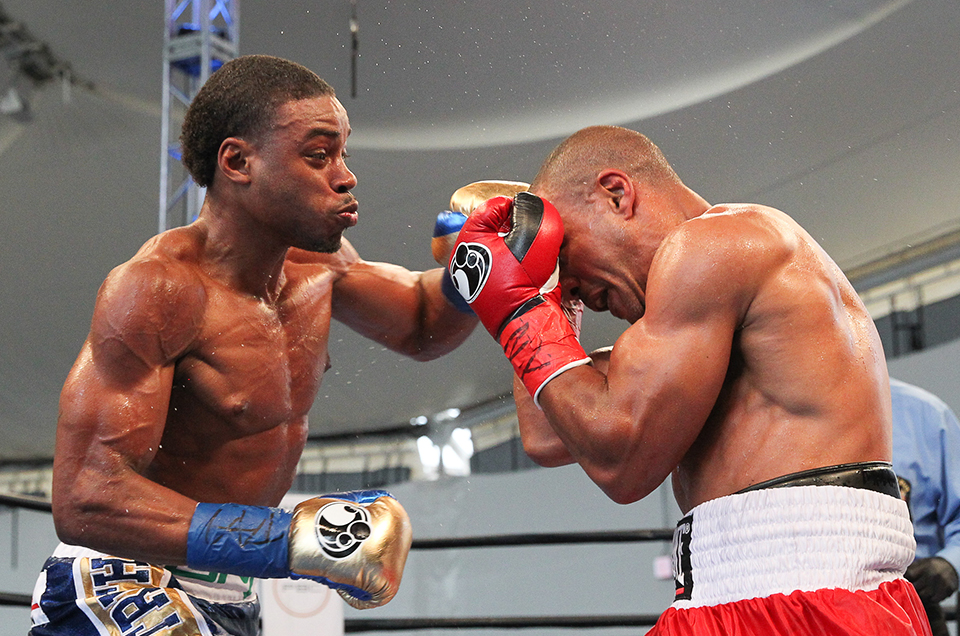 Spence Returns for First Title Defense in
SHOWTIME CHAMPIONSHIP BOXING® Main Event
Tickets On Sale Tomorrow, Wednesday, Nov. 22 at 10 a.m. ET
BROOKLYN (Nov. 21, 2017) – Undefeated IBF Welterweight World Champion Errol “The Truth” Spence Jr. will make the first defense of his title when he takes on former two-division world champion Lamont Peterson on Saturday, January 20 live on SHOWTIME. The event is presented by Premier Boxing Champions from Barclays Center, the home of BROOKLYN BOXING®.
SHOWTIME CHAMPIONSHIP BOXING coverage begins live at 9 p.m. ET/6 p.m. PT and will feature undercard attractions that will be announced in the near future.
Tickets for the live event, which is promoted by DiBella Entertainment and TGB Promotions, are priced starting at $50, and go on sale Wednesday, Nov. 22 at 10 a.m. ET. Tickets can be purchased at ticketmaster.com, barclayscenter.com or by calling 800-745-3000. Tickets can also be purchased at the American Express Box Office at Barclays Center starting Thursday, Nov. 23 at noon. Group discounts are available by calling 844-BKLYN-GP. The SHOWTIME CHAMPIONSHIP BOXING telecast will also be available in Spanish via secondary audio programming (SAP).
“I’m pleased to be promoting Spence vs. Peterson, one of the very best matchups in the welterweight division and in all of boxing,” said Lou DiBella, President of DiBella Entertainment. “Spence is not only one of the best welterweights in the world, but one of the best pound-for-pound fighters in boxing. In Peterson, he faces another elite welterweight and a two-time world champion. Spence vs. Peterson will bring the heat to Barclays Center on a chilly January 20. This is yet another night in the outstanding run of big time fights on SHOWTIME CHAMPIONSHIP BOXING.”
“Spence vs. Peterson is an intriguing matchup between two elite welterweights looking to reach the top of this marquee division,” said Tom Brown, President of TGB Promotions. “Errol Spence is a rising star with his sights set on title unification and the top of the pound-for-pound list, but he’s going to receive a stern test from Lamont Peterson, a multiple division champion whose resume is filled with top class opponents. It’s going to be another fantastic atmosphere at Barclays Center and a great night of fights live on SHOWTIME.”
“With his breakout performance against Kell Brook, Errol Spence established himself as one of top fighters in the welterweight division, if not in all of boxing,” said Stephen Espinoza, Executive Vice President and General Manager, SHOWTIME Sports.  “Never one to rest on his laurels, Errol continues to seek out the toughest available opponents, and he has found exactly that in Lamont Peterson.  Lamont has never backed down from a challenge, and as a result, he has a wealth of experience with one of the strongest resumes in the division.  This type of high profile, dangerous matchup is the quintessential SHOWTIME CHAMPIONSHIP BOXING main event.”
“BROOKLYN BOXING enjoyed a banner year in 2017, and we are looking forward to carrying that momentum into 2018,” said Brett Yormark, CEO of Brooklyn Sports & Entertainment. “Spence vs. Peterson sets a strong precedent for the year, with two top welterweights returning to the ring at Barclays Center to compete for recognition in one of the sport’s most talented divisions.”
Spence (22-0, 19 KOs), of Dallas, traveled to England to dethrone IBF 147-pound champion and hometown favorite Kell Brook on May 27 on SHOWTIME in one of the defining fights of 2017.  The 27-year-old, who had long been touted as boxing’s next big thing, fulfilled his promise with a breakthrough performance, fracturing Brook’s orbital bone en route to an 11th round TKO.  A 2012 U.S. Olympian, Spence will enter the ring at Barclays Center for the third time after most recently stopping former champion Chris Algieri in an April 2016 main event. He will fight in Brooklyn for the fourth time; he earned his title shot by knocking out Leonard Bundu at the Ford Amphitheater at Coney Island Boardwalk in August 2016.
“My goal is to unify the welterweight division in 2018, but this fight is a true test and Lamont Peterson is a veteran that I definitely will not overlook,” said Spence. “I sparred him in the amateurs and I know what he brings to the table. I have to get through him to achieve my goals and that is what I plan on doing January 20th.“
Peterson (35-3-1, 17 KOs), of Washington, D.C., has won titles at 140 and 147 pounds while facing some of the biggest names in the sport, including Danny Garcia, Amir Khan and Timothy Bradley.  The 33-year-old won the WBA 147-pound title in his last outing Feb. 18 on SHOWTIME before relinquishing the belt for the chance to challenge Spence. Peterson has won four of his last five outings, twice fighting at Barclays Center. His Brooklyn debut saw him defeat Edgar Santana by TKO in 2014 before dropping a narrow majority draw to Garcia in a 2015 main event in Brooklyn.
“First off, I’m happy to be getting back in the ring,” said Peterson. “I’ve stayed in the gym and I’m ready to go. This is a fight I wanted and as I said before when I became a welterweight, I want to fight the best and make the fights that people want to see. I’m ready to give it my all and give the fans a great show.”
# # #
For more information visit www.sho.com/sports , www.premierboxingchampions.com,
follow us on Twitter @ShowtimeBoxing, @PremierBoxing, @LouDiBella, @TGBPromotions, @BarclaysCenter and @Swanson_Comm  or become a fan on Facebook at www.Facebook.com/SHOBoxing, www.Facebook.com/barclayscenter,
and www.Facebook.com/DiBellaEntertainment. PBC is sponsored by Corona Extra, La Cerveza Mas Fina.
CONTACTS:
Swanson Communications: (202) 783-5500, contact@swansonpr.com
Bernie Bahrmasel, DiBella Entertainment/ TGB Promotions:
(212) 947-2577 / (773) 592-2986
Tim Smith, Premier Boxing Champions: timothy@haymonboxing.com
Chris DeBlasio, Showtime Networks Inc.: (212) 708-1633
Matt Donovan, Showtime Networks Inc.: (212) 708-1663
Flo Jocou, Showtime Networks Inc.: (212) 708-7319
Mandy Gutmann, BSE: (718) 942-9587
Stuart Bryan, BSE: (718) 942-9574
Website Admin