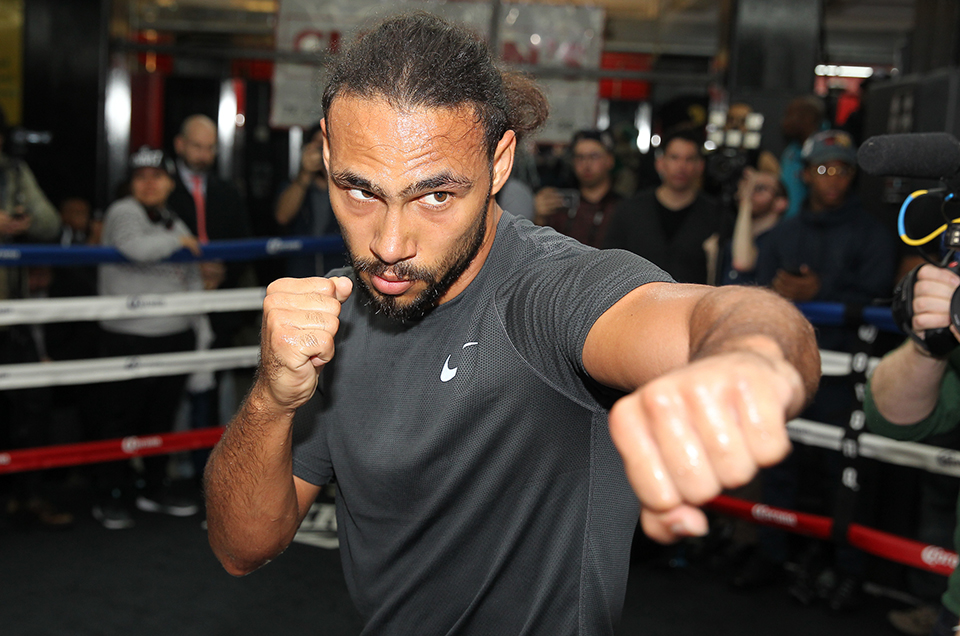 “This is one of the best matchups of the year. I try not to overthink it. It’s Porter by decision or Garcia only by KO. I lean toward Porter.” – Keith Thurman
Garcia vs. Porter | Saturday, September 8 Live On SHOWTIME®
From Barclays Center In Brooklyn, Presented By Premier Boxing Champions
NEW YORK (September 4, 2018) – Welterweight World Champion Keith Thurman has an acute understanding of what it takes to beat Danny Garcia and Shawn Porter. The undefeated, former unified champion edged both fighters in blockbuster matchups and will be watching intently from ringside at Barclays Center as the two face off for the WBC Welterweight World Championship Thurman vacated due to injury.
The reigning WBA 147-pound champion, Thurman defeated Porter via unanimous decision in a 2016 Fight of the Year candidate (FULL FIGHT VIDEO: https://s.sho.com/2MAUoNH), and narrowly beat Garcia via majority decision in 2017 (FULL FIGHT VIDEO: https://s.sho.com/2MZB6kA).  The matchups were so closely contested that both fights would have been ruled draws if a single round were scored differently.
Thurman spoke with SHOWTIME Sports® Hall of Fame analyst Steve Farhood to break down what he calls “one of the best matchups of the year” in seven key categories – punching power, physical strength, defense, speed, boxing ability, ring IQ and chin.
See below for Thurman’s analysis of the showdown of consensus top-5 welterweights, which airs this Saturday live on SHOWTIME.
PUNCHING POWER: Edge GARCIA: “Danny can punch with both hands. He does load up, so you can’t be right there in front of him.”
PHYSICAL STRENGTH: Edge PORTER: “Shawn is clearly the more physical fighter.”
DEFENSE: Edge GARCIA: “Porter’s defense is his offense. With Danny, I’ve never seen anyone so willing to just stare at me without throwing a punch. He’s committed to being second, a pure counterpuncher.”
SPEED: Edge PORTER: “Shawn is faster and a little more athletic. He’ll triple on the jab to get inside and use stutter-steps. Danny’s real relaxed, but that doesn’t necessarily come through in his hand speed.”
BOXING ABILITY: Edge GARCIA: “Neither one is known for boxing. Danny’s a counterpuncher, and Shawn outworks you. Danny has nice boxing movement when he wants to be evasive. He’s underrated when on his back foot. We saw that against (Lucas) Matthysse and (Brandon) Rios.”
RING IQ: EVEN: “Hard to judge. These are two world champions with tremendous amateur pedigrees.”
CHIN: EVEN: “In my fights, Porter took more big punches than Garcia did. I had to hit hard to keep Porter off me. They both have enough power to hurt each other.”
PREDICTION: “This is one of the best matchups of the year. I try not to overthink it. It’s Porter by decision or Garcia only by KO. I lean toward PORTER.”
The SHOWTIME CHAMPIONSHIP BOXING® telecast begins at 9 p.m. ET/6 p.m. PT and features a welterweight title eliminator between Yordenis Ugas and Cesar Barrionuevo and heavyweight action that pits unbeaten Polish slugger Adam Kownacki against former heavyweight champion Charles Martin.
Undercard streaming coverage begins at 7 p.m. ET/4 p.m. PT on SHOWTIME CHAMPIONSHIP BOXING COUNTDOWN as five-division world champion Amanda Serrano attempts to win a world title in her record sixth weight class when she faces Yamila Esther Reynoso for the WBO 140-pound title.
Tickets for the live event, which is promoted by TGB Promotions and DiBella Entertainment, in association with DSG Promotions, start at $50 and are on sale now. Tickets can be purchased at ticketmaster.com, barclayscenter.com, or by calling 800-745-3000. Tickets can also be purchased at the American Express Box Office at Barclays Center. Group discounts are available by calling 844-BKLYN-GP.
#          #          #
For more information, visit www.SHO.com/Sports, www.PremierBoxingChampions.com, follow on Twitter @ShowtimeBoxing, @PremierBoxing, @DannySwift, @ShowtimeShawnP, @LouDiBella, @DiBellaEnt, @TGBPromotions, or become a fan on Facebook at www.Facebook.com/SHOBoxing and www.Facebook.com/DiBellaEntertainment. PBC is sponsored by Corona, La Cerveza Mas Fina.
CONTACTS:  Swanson Communications: (202) 783-5500, contact@swansonpr.com
Bernie Bahrmasel, DiBella Entertainment:(212) 947-2577
TGB Promotions: (818) 817-8001
Tim Smith, Premier Boxing Champions: timothy@haymonboxing.com
Chris DeBlasio, Showtime Networks Inc.: (212) 708-1633
Matt Donovan, Showtime Networks Inc.: (212) 708-1663
Flo Jocou, Showtime Networks Inc.: (212) 708-7319
Mandy Gutmann, BSE: (718) 942-9587
Stuart Bryan, BSE: (718) 942-9574
Steve Pratt, BZA PR for SHOWTIME: (310) 408-4555
Website Admin