WINNER TAKES THE BELT AND BROOKLYN! 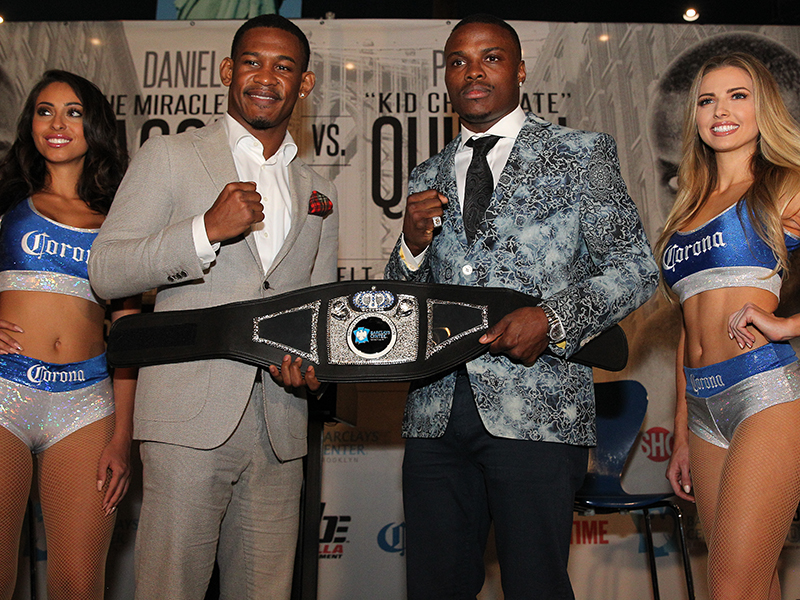 DANIEL JACOBS & PETER QUILLIN SQUARE-OFF ON
SHOWTIME CHAMPIONSHIP BOXING® SATURDAY, DECEMBER 5 AT BARCLAYS CENTER IN BROOKLYN
LIVE ON SHOWTIME® AT 9 P.M. ET/6 P.M. PT
General Tickets On Sale Tuesday, October 6 At 10 a.m. ET
BROOKLYN (September 30, 2015) – In a highly anticipated showdown between two of Brooklyn’s most exciting and talented fighters, WBA Middleweight World Champion Daniel “The Miracle Man” Jacobs (30-1, 27 KOs)will take on former world champion Peter “Kid Chocolate” Quillin (32-0-1, 23 KOs)on Saturday, December 5 from Barclays Center in Brooklyn live on SHOWTIME (9 p.m. ET/6 p.m. PT).
“There is no doubt this is going to be one of the biggest fights Brooklyn has ever seen,” said Jacobs. “Peter and I go back a long time, but this is business. I’m the champion and he’s the challenger. I’m going to do everything I can to win on December 5 and show the world that I’m the best Brooklyn has to offer.”
“The fans have waited a long time for this fight and now it’s finally here,” said Quillin. “I was back in the gym on Monday after my fight against [Michael] Zerafa preparing for December 5. I know there is so much at stake for me -a belt and Brooklyn bragging rights. It’s going to be a night to remember for me and for all of Brooklyn.”
Tickets for the live event, which is promoted by DiBella Entertainment, start at $50, not including applicable fees, and are on sale Tuesday, October 6 at 10 a.m. ET and can be purchased online by visiting www.ticketmaster.com, www.barclayscenter.com or by calling 1-800-745-3000. Tickets will also be available at the American Express Box Office at Barclays Center beginning Wednesday, October 7 at 12 p.m., if tickets are still available.
These two powerful fighters have been on a collision course for several years, dating to when Quillin was the WBO Middleweight Champion and Jacobs was working back towards contender status after sitting out over a year due to cancer.
While Quillin relinquished his belt due to the birth of his son and the death of his uncle, Jacobs continued to rise in the rankings and earned his world title with a knockout in August of 2014 over Jarrod Fletcher in Brooklyn. Each fighter has earned knockout victories in the last two months and both boxers will return to the site of their world title-winning performances when they clash at Barclays Center.
“This is a can’t-miss, pick’em fight between two of the best middleweights in the world,” said Lou DiBella, President of DiBella Entertainment. “This is truly the battle of Brooklyn, with both Danny and Peter possessing the power to create fireworks in an explosive night. SHOWTIME will truly be ending 2015 with a bang…or many of them.”
“Daniel Jacobs vs. Peter Quillin is a unique matchup of two bona fide middleweight stars, each in the prime of his career,” said Stephen Espinoza, Executive Vice President and General Manager, SHOWTIME Sports.  “It is as evenly matched as you’ll find in the division, and it stands to be the career-defining fight for both men. We expect the action in the ring and the atmosphere at Barclays Center will make for a very memorable night. For boxing fans, it doesn’t get any better than this.”
“This is the ultimate Brooklyn matchup,” said Brett Yormark, CEO of Barclays Center.
“Miracle Man vs. Kid Chocolate is about more than a world title, it’s about Brooklyn bragging rights and glory. The borough is ready for December 5.”
An inspirational figure who will fight at Barclays Center for the fifth time, Brooklyn’s Jacobs completed his road to champion when he defeated Fletcher for the middleweight title. In 2011, while pursuing a championship in the ring, cancer threatened his life and kept him on the sidelines for 19 months. When he returned, he picked up where he left off, and hasn’t lost since. The 28-year-old is coming off of a second round stoppage of former world champion Sergio Mora in August.
Quillin gets back in the ring after having knocked out Michael Zerafa earlier this month to follow up his hard-fought draw against middleweight world champion Andy Lee in April. He won a middleweight belt in 2012 with his highlight-reel, six-knockdown demolition against Hassan N’Dam in the first boxing card hosted at Barclays Center. Born in Chicago, raised in Grand Rapids, Michigan, but residing in Brooklyn, the 31-year-old went on to defend that title against strong contenders Fernando Guerrero, Gabriel Rosado and Lukas Konecny. Now, “Kid Chocolate” looks to become a world champion for the second time.
Barclays Center’s BROOKLYN BOXING™ programming platform is presented by AARP. For more information visit www.SHO.com/Sports follow on Twitter @SHOSports, @DanielJacobsTKO, @KidChocolate, @LouDiBella, @BarclaysCenter and @Swanson_Comm or become a fan on Facebook at www.Facebook.com/SHOSports, www.Facebook.com/DiBellaEntertainment and www.Facebook.com/barclayscenter.
CONTACTS:
Swanson Communications: (202) 783-5500
Kevin Rooney, DiBella Entertainment: (212) 947-2577
Chris DeBlasio, Showtime Networks Inc.: (212) 708-1633
Matt Donovan, Showtime Networks Inc.: (212) 708-1663
Flo Jocou, Showtime Networks Inc.: (212) 708-7319
John Beyrooty/Jared Kaufer, BZA/SHOWTIME: (562) 233-7477/(818) 621-1111
Barry Baum, Barclays Center: (718) 942-9533
Mandy Gutmann, Barclays Center: (718) 942-9587
Credentials: www.magnamedia.com
Website Admin