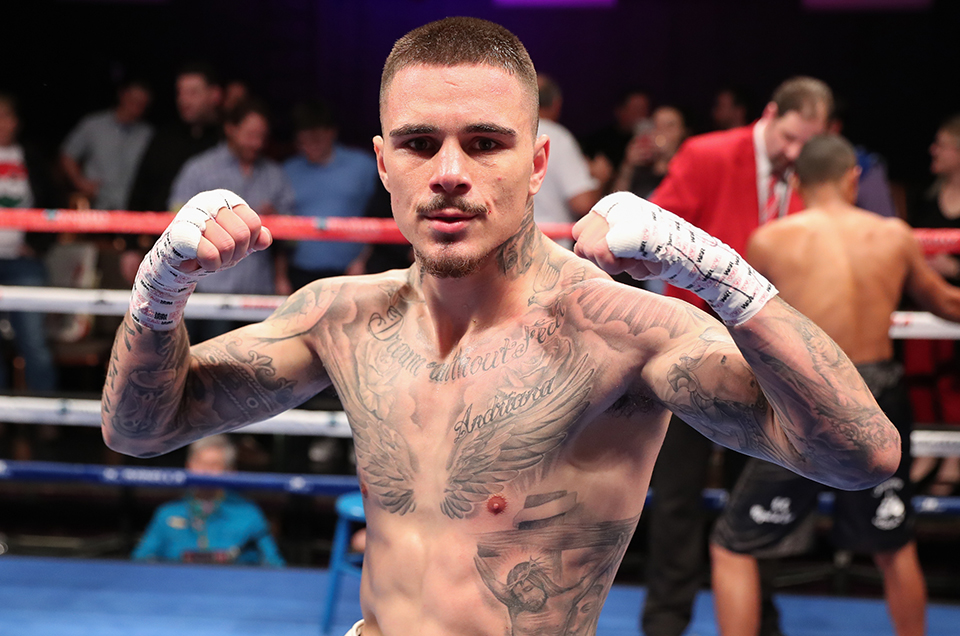 New York, NY (June 6, 2019) Undefeated and World Ranked Lightweight Contender “Ferocious” George Kambosos Jr. (16-0, 9 KOs) returns to the land of his ancestors, Athens, Greece, this Friday,June 7, in a 10-round contest against Richard “Hit Boy” Pena (11-2-1, 9 KOs), of Guasipati, Venezuela, at the famed Galatsi Olympic Arena.Both Kambosos and Pena weighed in at 134.7 lbs. for the clash.

The bout can be streamed live at www.novasports.gr

World ranked #5 by the International Boxing Federation and #9 by the World Boxing Organization, the DiBella Entertainment-promoted 25-year-old is overjoyed with excitement at the opportunity to fight in Greece.

“I have fought in some amazing venues all over the world, from the MGM Grand in Las Vegas to the Axiata Stadium In Kuala Lumpur, but to fight here in Athens, Greece, at the Galatsi Olympic Arena is something very special for me and I feel at home here,” said Kambosos. “My family origins are Greek and I am a very proud Greek Australian fighter and patriot. The Greek fans will get a chance tomorrow to see in the flesh a warrior who is knocking on the door for a world title, an undefeated top five world rated fighter, who has the same blood as they do.

“Greece has such a long history and ultimately where boxing has its origin story, so it’s only right that we have a world class fighter bring back this amazing sport to Greece with a packed stadium. I am ready to fill these shoes and do this. Friday night will be something very special. I have worked extremely hard in camp in my new base of Miami, FL, with head coach Javiel Centeno and I am excited and motivated to give the Greek fans, who are live in attendance as well as all the worldwide viewing audience, a spectacular fight and show them that George ‘Ferocious’ Kambosos Jr. is the real deal. I want to show them that they have a fighter with the same blood ready to become a world champion representing both the Greeks and the Australians with honor. I have a great team around me, from my coaches, my manager, my advisor and, of course, my promoter Lou DiBella, and together we will continue working toward becoming a world champion.”

Stated trainer Javiel Centeno, “Coming off a successful first camp with George, I’m excited to see him in action tomorrow against Richard Pena. We’ve worked hard on improving a couple  of things in camp and I’m really looking forward to him making a statement in Greece while implementing some of the things we’ve worked on. George has become stronger and has sharpened his tools for this fight.”

“George is a proud fighter with proud roots in Greece,” said Lou DiBella, President of DiBella Entertainment. “It was important for me to deliver him an opportunity to reconnect with those roots on his path to a world championship. And, who knows, down the road maybe we’ll see George return to bring a world championship fight to Greece.”

A frequent sparring partner of boxing legend Manny Pacquiao, Kambosos kicked off his 2019 campaign with a stellar performance in an eight-round unanimous decision against Rey Perez on January 19. The fight took place on the undercard of Pacquiao’s victory against Adrien Broner at the MGM Grand Casino, in Las Vegas, NV.

Just 19-years-old, Pena has proven his mettle in the professional ranks since his debut two years ago. Most recently, he scored stoppage wins versus Joaquin Alvarez on February 9, and Carlos Moreno on December 15, 2018, both of which took place in Venezuela.