BILLEL DIB CONTINUES HIS QUEST FOR A WORLD CHAMPIONSHIP 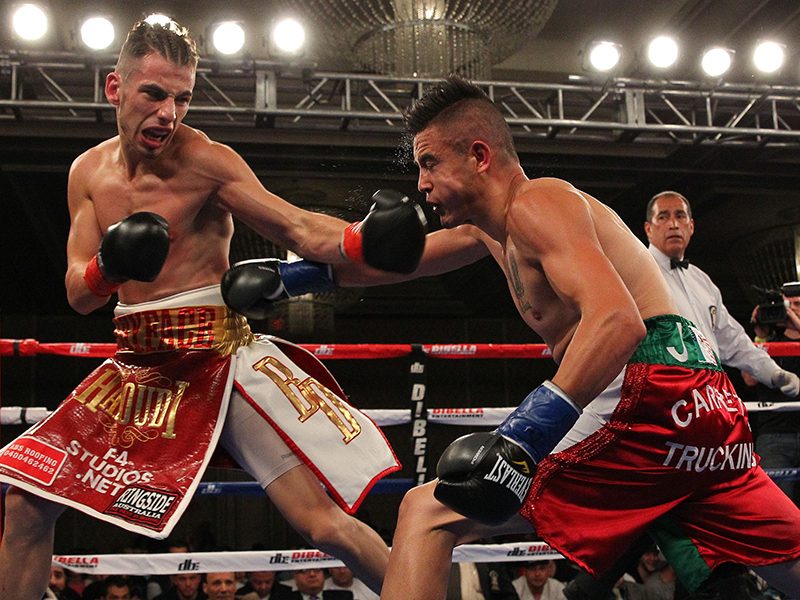 New York, NY/Miami, OK (4/10/17) – The stakes are high for Australian junior lightweight contender Billel “Baby Face” Dib (21-1, 10 KOs), who takes the next step toward a world title shot on April 21, at Buffalo Run Casino, in Miami, OK. He will be facing Cleveland power-hitter Yuandale Evans (18-1, 14 KOs) in a scheduled 10-round bout, with the vacant WBA-NABA junior lightweight title on the line. It will be the 27-year-old Dib’s third bout in the United States, all taking place in the past 12 months.
Training camp is underway for Dib, who left his wife and two young children behind in his hometown of Sydney, Australia, to train with German Caicedo, in Miami, FL. This is a new routine for Dib, who plans to hold all future US training camps in Miami with the respected veteran trainer Caicedo as well.
“The US is the Mecca of boxing,” said Dib. “The sparring is on a different level here and Caicedo has been in boxing for a long time having built many champions. I have to succeed at this. I miss so much of my kids growing up that it has to be worth it.”
Fighting in the US is both a necessity and a dream for Dib.
“Every professional fighter aspires to fight in the States,” said Dib. “I love fighting at home in front of my family and friends, but to be recognized as an elite fighter, I have to showcase my talent in the States. Every win is another step toward earning a world title shot. I am excited to be fighting for the NABA belt against a strong and experienced opponent like Evans.”

A pro since 2009, Yuandale Evans is a devastating puncher, with eight of his 14 knockouts coming in the first round. In May 2011, Evans won the interim WBC Youth Intercontinental junior lightweight title. He has impressive wins over former Filipino champion Adones Aguelo and former world title challenger Emmanuel Lucero. Following a three-year hiatus, Evans returned to the ring with two explosive knockout victories and is anxious to regain the career momentum he once built prior to his only defeat.

“I am very thankful that Lou DiBella has given me a chance to prove my talent and skill to the boxing world and to work with me on this fight,” said Evans. “I’ve waited five years for an opportunity like this and I am ready to demonstrate that I am the best at what I do.”

Dib comes from a fighting family, the most notable of whom is his first cousin, former world champion Billy Dib.
“For a long time, I was known as ‘Billy’s cousin’, but now I’m coming into my own,” said Dib.
The notoriety that he’s enjoyed in his home country has also opened unexpected doors for Dib, who was named an Ambassador for Islamic Relief Australia. Prior to beginning camp to prepare for Evans, Dib helped raise over $200,000 for the organization and spent three weeks in Lebanon working with Syrian and Pakistani refugees.
“This is something I want to continue to do as my career progresses,” said Dib. “I felt selfish walking away and returning to my life. I want to return as soon as possible, and help build houses for refugees in Lebanon.”
Dib, who garnered the attention of the World Boxing Organization (WBO) when he captured the interim WBO Oriental junior lightweight title in 2015, is now ranked #7 by the sanctioning body. He is also rated #13 by the World Boxing Association (WBA).
“I’m thankful to Lou DiBella for the opportunity to fight in the States,” said Dib. “He’s an honorable man, and DiBella Entertainment is a great, reputable boxing promotional company. I will fight anyone that is put in front of me. Tell me the date and whom I’ll be fighting, and I’ll be ready. I want to fight the top guys in my division.”
His father, Mahamad Dib, is also grateful for the opportunity for his son to fight in the US under the DiBella banner.
“This is a stepping stone for a world title. He will not be deterred,” said the senior Dib.
“Billel Dib is a highly talented, world class junior lightweight contender,” said Lou DiBella, President of DiBella Entertainment. “I’m thrilled to be able to keep him active in the US to increase his exposure in front of a stateside audience, as he works his way toward world title contention. He’ll have a chance to move another step closer on April 21, facing a very tough opponent in Yuandale Evans, with the NABA title at stake. I’m also happy to again work with Holden Productions on what will be a tremendous card at Buffalo Run Casino.”
Dib challenges Yuandale Evans for the WBA-NABA junior lightweight title on Friday, April 21, at Buffalo Run Casino, in Miami, OK. The event is co-promoted by DiBella Entertainment and Holden Productions. Tickets are $75, $65, $55 and $35, and are available at buffalorun.com. Doors open at 7:00pm CT, with the first bell set for 8:00pm CT.
Website Admin