Boxing’s Best Heavyweights Past and Present Give Their Thoughts and Predictions On Deontay Wilder vs. Tyson Fury Blockbuster as Fight Week Begins in Los Angeles 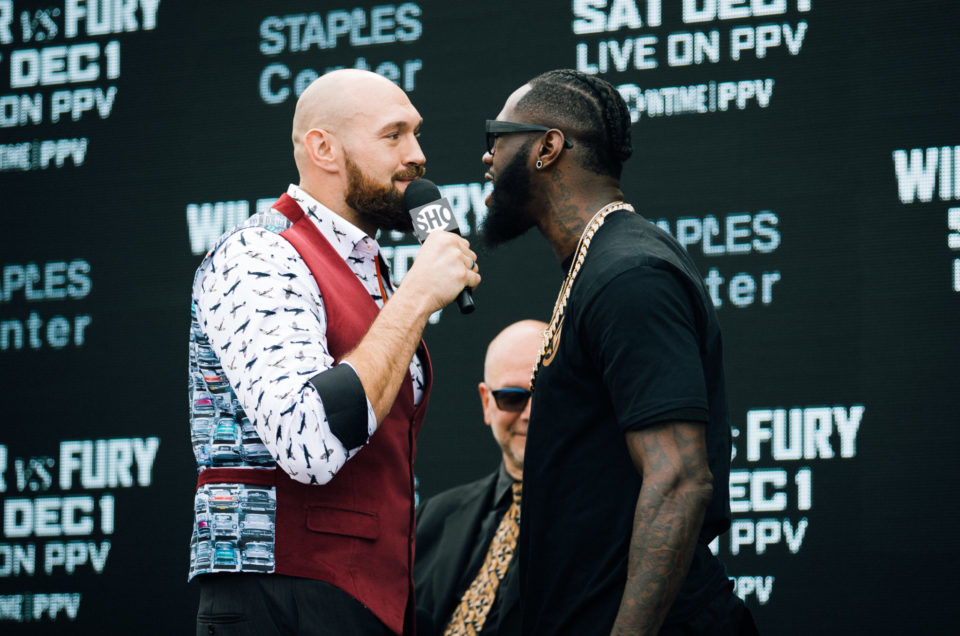 Saturday, December 1 Live on SHOWTIME PPV® from
STAPLES Center & Presented by Premier Boxing Champions
LOS ANGELES (November 27, 2018) – As fight week in Los Angles kicks off, heavyweights of the past and present have spoken, and the majority believe Deontay Wilder’s pure punching power will be enough to defeat the highly-skilledTyson Fury on Saturday, December 1 on SHOWTIME PPV®.
Some of the greatest heavyweight names in the history of boxing weighed-in on what will be the biggest heavyweight title fight in the U.S. since Mike Tyson took on Lennox Lewis in 2002. The SHOWTIME PPV begins at 9 p.m. ET/6 p.m. PT from STAPLES Center in an event presented by Premier Boxing Champions.
Tickets for the event, which is promoted by BombZquad Enterprises and Queensberry Promotions, in association with TGB Promotions and DiBella Entertainment, are on sale now and are available via AXS.com. Wilder vs. Fury will be produced and distributed by SHOWTIME PPV. The suggested retail price (SRP) for the pay-per-view telecast is $64.99 for standard definition.
Here is what the current and former heavyweight greats had to say about the Wilder vs. Fury matchup:
MIKE TYSON:
“Although Wilder’s punch is strong, nothing can compare to the mental strength Fury has shown both in and out of the ring. It’ll be a close call, but I think Fury’s got a true fighting chance.”
EVANDER HOLYFIELD:
“It’s a great fight. Fury’s got a lot of skills, he’s awkward and he has long arms. He has good reflexes and is a strong counter-puncher. Deontay needs to be first and he can’t wait on Tyson. Tyson’s always been the bigger fighter. In fighting Deontay it’s the same case. If things get difficult, he’s (Fury) got more experience and a lot of tricks. I think with Deontay’s power, he might be able to end it early, but if Tyson can frustrate him and it goes the distance, then it could go his way.”
LENNOX LEWIS:
“If it goes the distance then it belongs to Tyson Fury. If it’s a short fight it will belong to Deontay Wilder. This is an epic and most-unpredictable showdown. I can’t wait for this fight.”
GEORGE FOREMAN:
“I am a big fan of Deontay Wilder and I was impressed with Tyson Fury and how he avoided the big shots against Wladimir Klitschko. I can see him going 12 rounds with Wilder because of his height and reach.
“The great thing about this fight is that we’re all talking about it. I think Wilder wins a close decision.”
RIDDICK BOWE:
“If Wilder comes out and means business then he should beat Fury with ease. My prediction is Wilder by knockout!”
GERRY COONEY:
“Deontay Wilder vs. Tyson Fury is a very interesting fight. I love Tyson Fury. I think he’s a remarkable self-promoter, and he did a great job with Wladimir Klitschko, using his feints and throwing Klitschko off his game plan. Deontay is a different kind of fighter, though. Fury fights at 30 miles per hour. Deontay fights at 100 miles per hour. So, when Deontay catches Fury and gets ahold of him I think it’s going to be over. I admire Fury, but I think he’s barking up the wrong tree with this fight. I think the bottom line is that Deontay is a whole different type of beast. He comes in aggressive and finishes his opponents. I hate to pick, but somebody has to lose. I’m picking Deontay by knockout and I think it ends inside of four or five rounds.”
LUIS ORTIZ
“If Fury decides he wants to dip and dive and move, then he can extend the fight. But it’s all up to Wilder. If Fury decides he wants to come to the middle of the ring and fight, then it’s going to be over quick. Wilder is going to catch him. Prediction: Wilder by KO.”
CHRIS ARREOLA:
“I think Wilder fighting Ortiz and now Fury back-to-back gives the fans exciting fights. I like both Wilder and Fury, but for this fight I am leaning slightly toward Wilder to win.”
#          #          #
ABOUT WILDER vs. FURY
Deontay Wilder vs. Tyson Fury pits the WBC Heavyweight World Champion Wilder against the lineal heavyweight champion Fury on SHOWTIME PPV® Saturday, December 1 from STAPLES CENTER in Los Angeles and presented by Premier Boxing Champions. The PPV undercard begins at 9 p.m. ET/6 p.m. PT and will feature unbeaten unified super welterweight world champion Jarrett Hurdreturning to take on Jason Welborn, Cuban heavyweight slugger Luis Ortizfacing-off against Travis Kauffmanand rising undefeated heavyweight Joe Joycebattling Joe Hanks.
For more information visit www.SHO.com/Sports, www.premierboxingchampions.com and www.staplescenter.com follow on Twitter @ShowtimeBoxing, @SHOSports, @PremierBoxing @BronzeBomber, @Tyson_Fury, @TGBPromotions, @STAPLESCenter and @Swanson_Comm or become a fan on Facebook at www.Facebook.com/SHOSports, www.Facebook.com/PremierBoxingChampions and www.facebook.com/STAPLESCenter.
Website Admin