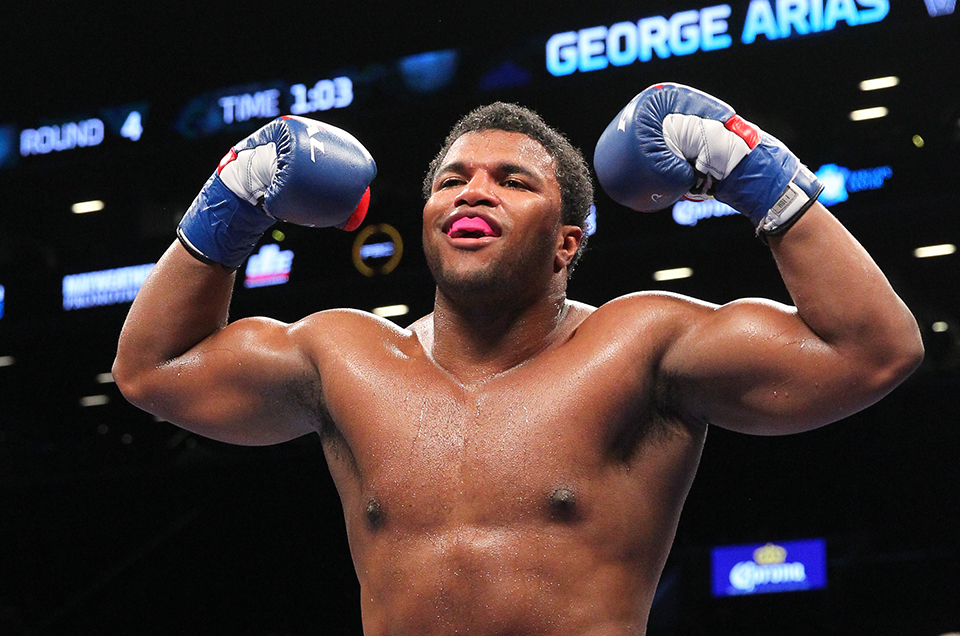 BROOKLYN (October 3, 2017) – Popular, undefeated Dominican heavyweight George Arias (8-0, 4 KOs), of The Bronx, NY, has been added to the undercard of the SHOWTIME Championship Boxing tripleheader, presented by Premier Boxing Champions, on Saturday, October 14, at Barclays Center, the home of BROOKLYN BOXING. Newly signed to promoter DiBella Entertainment, Arias will face Mexican Mario Heredia (14-5, 12 KOs), a former WBC Fecombox titlist from San Diego, CA, in a scheduled eight-round contest.
“I am very happy and grateful for this opportunity to sign with DiBella Entertainment and to be a part of this great event at Barclays Center on October 14,” said Arias. “I look forward to displaying my talent in front the local fans as I work toward my goal of becoming a world champion.”
“Heavyweight George Arias is a tremendous prospect with an entertaining, fan-friendly style,” said Lou DiBella, President of DiBella Entertainment. “I am excited to add him to an already-stacked undercard on October 14 at Barclays Center, in his first fight under the DiBella Entertainment banner.”
Born in San Francisco de Macoris, Dominican Republic, Arias moved to New York City in 1996, at four years old. After graduating from high school, he learned to box at Morris Park Boxing Gym near his home. He won the New York Golden Gloves tournament in 2014 then turned pro that October. Now trained and managed by Leon Washington Jr. and advised by Andre Rozier, Arias returned to the ring in 2017 following a 13-month layoff and has won three straight. On June 3, Arias emerged victorious via unanimous decision after a six-round war against undefeated Russian prospect Ruslan Shamalov, in the co-featured bout of DiBella Entertainment’s “Broadway Boxing” series. Arias then made his Barclays Center debut on July 29, handing Elder Hernandez his first loss by fourth-round stoppage, on the undercard of the Broner vs. Garcia event. Anxious to thrill his growing hometown fan base, Arias is determined to add another impressive victory to his ledger on October 14.
The SHOWTIME Championship Boxing tripleheader presented by Premier Boxing Champions on Saturday, October 14, features six of the world’s best super welterweights, with three world titles at stake, from Barclays Center, the home of BROOKLYN BOXING®.
Headlining the card, Erislandy Lara makes the seventh defense of his WBA title against unbeaten contender Terrell Gausha. WBC titlist Jermell Charlo takes on the young, hungry and fellow unbeaten Erickson Lubin in the co-feature and Jarrett Hurd opens up the telecast defending his IBF belt for the first time against former champion Austin Trout.

Tickets to the event start at $50 (not including applicable fees) and can be purchased at ticketmaster.com, barclayscenter.com or by calling 800-745-3000. Tickets can also be purchased at the American Express Box Office at Barclays Center. Group discounts are available by calling 844-BKLYN-GP.