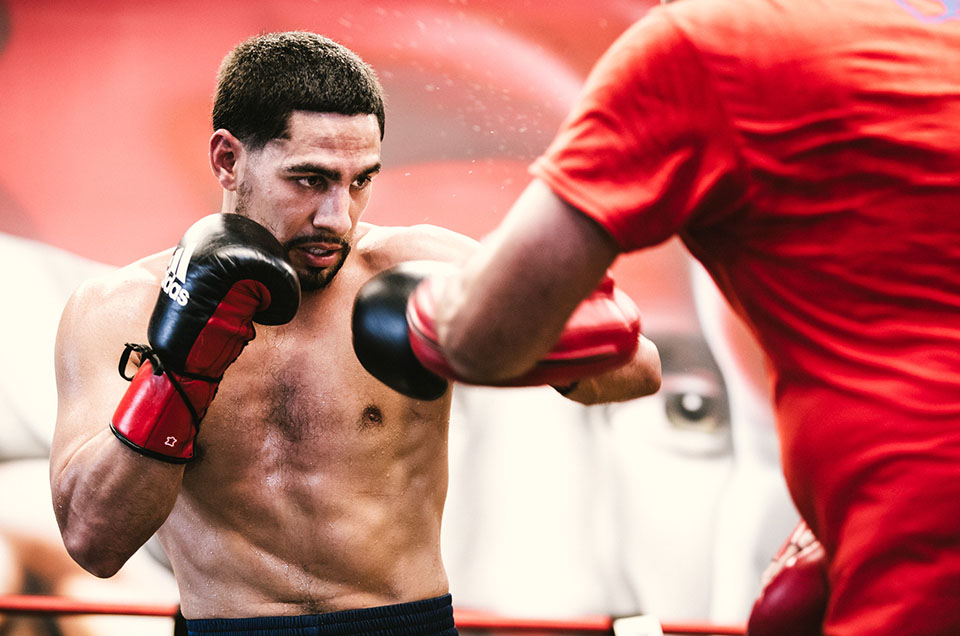 Former Welterweight World Champion Garcia Battle
Shawn Porter Saturday, September 8 Live on SHOWTIME
from Barclays Center in Brooklyn & Presented by
Premier Boxing Champions
Click HERE for Photos from Amanda Westcott/SHOWTIME
PHILADELPHIA (August 29, 2018) – Former world champion Danny Garcia hosted a media workout ahead of his world title showdown against Shawn Porter taking place Saturday, September 8 live on SHOWTIME from Barclays Center, the home of BROOKLYN BOXING™ and presented by Premier Boxing Champions.
The SHOWTIME CHAMPIONSHIP BOXING telecast begins at 9 p.m. ET/6 p.m. PT and features a welterweight title eliminator between Yordenis Ugas and Cesar Barrionuevo and heavyweight action that pits unbeaten Polish slugger Adam Kownacki against former heavyweight champion Charles Martin.
Undercard streaming coverage begins at 7 p.m. ET/4 p.m. PT on SHOWTIME CHAMPIONSHIP BOXING COUNTDOWN as five-division world champion Amanda Serrano attempts to win a world title in her record sixth weight class when she faces Yamila Esther Reynoso for the WBO 140-pound title.
Tickets for the live event, which is promoted by TGB Promotions and DiBella Entertainment, in association with DSG Promotions, start at $50 and are on sale now. Tickets can be purchased at ticketmaster.com, barclayscenter.com, or by calling 800-745-3000. Tickets can also be purchased at the American Express Box Office at Barclays Center. Group discounts are available by calling 844-BKLYN-GP.
Garcia, along with father and trainer Angel Garcia, showed off his skills and spoke about his upcoming clash and more from the DSG Boxing Gym in Philadelphia. Here is what they had to say Wednesday:
DANNY GARCIA
“Once you’re in there with me, it’s not the same as anyone else. It’s not the same as what you expect it to be. You’re in for a rude awakening.
“I’ve knocked out a lot of fighters for the first time, so it won’t be surprising to me if I knock Shawn Porter out for the first time.
“Shawn had to have some skill to get to this level, it wasn’t all brawling. I’m not taking anything away from him. We’re prepared for the best Shawn Porter.
“This is another opportunity to become a four-time world champion and that excites me. I still feel like the WBC title is mine, so I’m even more ready to reclaim it.
“Getting that world title back is what it’s all about. I know that I’m always going to be a top fighter. I fill the seats and make big fights, that’s why Shawn came to me after my win against Brandon Rios for his moment of glory.
“I can’t rank Porter against the other top fighters in my career. I’ll have to see what he brings once we get in the ring. I’ve fought a lot of great opponents and he’s just the next in that line.
“In boxing they say the more you throw, the more open you are to get hit. Volume punching has to be effective. I’m the sharper boxer and I land the cleaner punches. That’s more my style. We’ve prepared ourselves for 12 hard rounds of any style.
“After four rounds you can really tell how strong a fighter is and how good their conditioning is. It’s all about the will power after a certain amount of rounds and I carry that well.
“We’ve had perfect sparring with guys who just come forward and put pressure on you. We’ve had bigger, heavier guys and some guys who jab and box how the way that Porter does.
“There’s going to be a lot of support from Philly on September 8. I’m a big draw in Brooklyn and I’m going to make it another epic night for Philly sports.”
ANGEL GARCIA, Danny’s Father & Trainer
“Porter really isn’t worried about Danny’s power, but he should be. I’m not mad about it, he just better have no excuses in that ring. Because Danny’s not about excuses.
“We’re working hard and we’re going to be ready for anything Shawn Porter thinks he has up his sleeve. If he comes rushing in, he’s playing right into Danny’s hands.
“Danny is a star and he’s going to show it again in this fight. He always puts on a star performance and this going to be another stage for him to shine.”
#          #          #
For more information visit www.SHO.com/Sports,www.PremierBoxingChampions.com, follow on Twitter @ShowtimeBoxing, @PremierBoxing, @DannySwift, @ShowtimeShawnP, @LouDiBella, @TGBPromotions, or become a fan on Facebook at www.Facebook.com/SHOBoxing and www.Facebook.com/DiBellaEntertainment. PBC is sponsored by Corona, La Cerveza Mas Fina.
CONTACTS:  Swanson Communications: (202) 783-5500, contact@swansonpr.com
Bernie Bahrmasel, DiBella Entertainment:(212) 947-2577
Monica Jaffe, TGB Promotions: (818) 817-8001
Tim Smith, Premier Boxing Champions: timothy@haymonboxing.com
SHOWTIME Sports: (212) 708-1339
Mandy Gutmann, BSE: (718) 942-9587
Stuart Bryan, BSE: (718) 942-9574
Steve Pratt, BZA: (310) 408-4555
Credentials: www.magnamedia.com
Website Admin