11/01/2017
Heavyweight World Title Showdown Headlines SHOWTIME CHAMPIONSHIP BOXING Tripleheader Saturday, November 4at Barclays Center in Brooklyn
Click HERE for Photos from Ed Diller/DiBella Entertainment
BROOKLYN (November 1, 2017) – WBC Heavyweight World Champion Deontay Wilder and former world champion Bermane Stiverne showed off their power and skills at the media workout Wednesday in Brooklyn before they meet in the main event of SHOWTIME CHAMPIONSHIP BOXING Saturday, November 4 from Barclays Center, the home of BROOKLYN BOXING™.
Presented by Premier Boxing Champions, the event features former world champion Shawn Porter taking on Adrian Granados in a welterweight world title eliminator. The three-fight SHOWTIME CHAMPIONSHIP BOXING telecast begins live at 9 p.m. ET/6 p.m. PT with unbeaten Sergey Lipinets battling Japan’s Akihiro Kondo for the vacant IBF Junior Welterweight World Championship.
Tickets for the live event, which is promoted by DiBella Entertainment and TGB Promotions, are on sale now and can be purchased at ticketmaster.com, barclayscenter.com or by calling 800-745-3000. Tickets can also be purchased at the American Express Box Office at Barclays Center. Group discounts are available by calling 844-BKLYN-GP.
Joining the televised fighters at Gleason’s Gym on Wednesday were five-time world champion Amanda Serrano, who returns to the ring in undercard action Saturday. Also in attendance were unbeaten prospects Chris Colbert and Titus Williams, who meet in an eight-round featherweight attraction.
Here is what the fighters had to say Wednesday:
DEONTAY WILDER 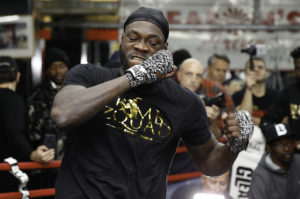 “Stiverne is going to see me come to Barclays Center and finish the job on Saturday. He survived the first time. He’s the only one to survive on their feet. This is something that I’ve come back to. I will finish the job this time.
“Stiverne had a lot of excuses after the last fight. Nobody wants to hear excuses from the loser. He knows what happened. I beat him 12 rounds in a row. I think this fight will be even easier for me. He hasn’t improved since we last fought, but I’m going to show him a whole new Deontay Wilder. This is the end of Bermane Stiverne’s career right here.
“As soon as Anthony Joshua accepts the fight, then I’ll be there. They’re trying to distract people because they know that I’m a danger to anybody’s career. All their excuses have nothing to do with the sport of boxing. The only thing people care about is the best fighting the best, and that’s what I’m trying to do.
“I thought the first Stiverne fight should have been stopped. He had knots all over his faced and was concussed. I’m not trying to leave any doubt this time around.
“This is my mandatory opponent. I must face him and that’s just what it is. I’ve called out every name in the sport. All the top guys have ducked me, so I just have to take care of the people that are able to get in the ring.”
BERMANE STIVERNE 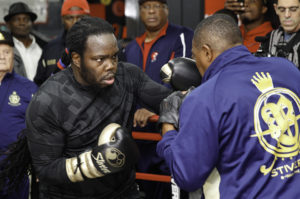 “I have no fear heading into this fight. It’s not that I didn’t see the openings in the last fight, I just couldn’t physically perform how
I needed to.
“I had health concerns last fight but now I’ve turned the chapter on that and I’m focused on Saturday night. This is going to be a completely different fight this time around
“I’m hungry to win. I’m always motivated and excited about getting into the ring, but obviously this is the biggest chance I’m going to have.
“The stage is set and my destiny is in front of me. I always said I was going to be the first person to beat him, and that is going to come together on Saturday.
“Everything has been perfect in camp. Deontay is going to be in for a real rude awakening on Saturday. I’m going to let my fists do the talking for me.”
SHAWN PORTER 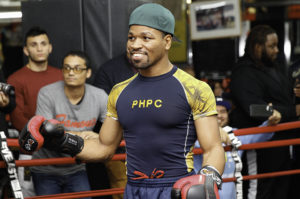 “This is a great style matchup. I think that’s why this fight was made. We are two guys that are going to go in there and go 12 hard rounds. My job is to get in there and outbox him and get him out of there.
“I don’t think I need to make any adjustments because I can come forward, move around the ring, create angles – I think Adrian isn’t exactly ready for that. My foot movement and of course my hand speed will be the difference.
“This is the second eliminator for me. It is about doing it again. I have to get the job done and get that fight with Keith Thurman.
“I want to make it very clear that I’m the better boxer. I want it to be clear that I can do to Adrian Granados what no one else has been able to do – put him on his butt.
“On all of our gear we wrote #VegasStrong. We want to send a message to everyone in Vegas that I don’t just live there, but it is part of my heart now. My heart goes out to everyone affected by the tragedy and now we are over a month past that. I am fighting for the people of Vegas.”
ADRIAN GRANADOS 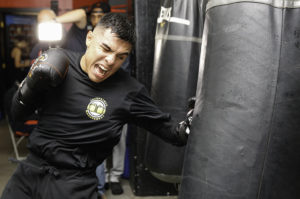