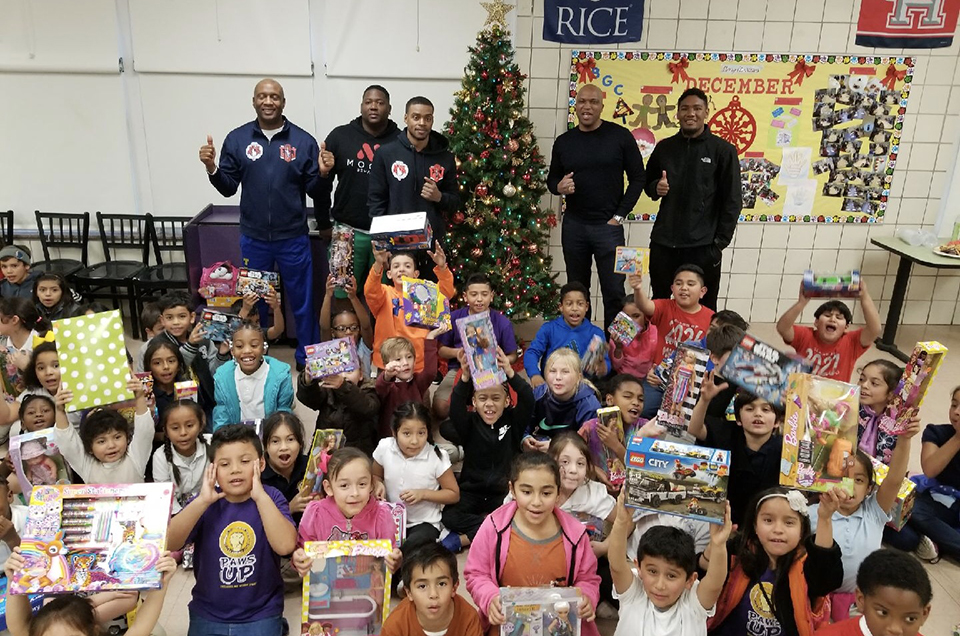 Toy Drive Benefits the Boys & Girls Club of Greater Dallas
Click HERE for Photos from Team Spence
DALLAS (December 19, 2017) – Unbeaten welterweight world champion Errol Spence Jr. and his trainer Derrick James have spent the first part of the holiday season giving back to their local community in and around Dallas through a Holiday Toy Drive they hosted throughout December to benefit the Boys and Girls Club of greater Dallas.
Spence and James encouraged locals to donate toys to the Boys and Girls Club leading up to Monday, December 18 when Spence and James arrived at the Lipscomb Boys & Girls Club to make their own donation and visit with the kids.
“It’s always important to give back, especially during the holidays,” said Spence. “Not everybody grows up knowing if they’ll have toys under the tree, so I just wanted to make sure I could help as many kids as possible and put a smile on some faces this holiday season.  My city made me who I am so it’s the least I can do to help spread some positivity this time of year.”
“I wanted to host this toy drive because I grew up in the Oak Cliff Boys and Girls Club,” said James. “They gave me so much, so I feel obligated and honored to give back. These clubs help so many underserved families and kids. I wanted to do what I could to help make their wishes come true.”
Spence returns to the ring on Saturday, January 20 as he makes the first defense of his title against former two-division champion Lamont Peterson live on SHOWTIME. The event takes place at Barclays Center, the home of BROOKLYN BOXING® and is presented by Premier Boxing Champions.
Tickets for the live event, which is promoted by DiBella Entertainment and TGB Promotions, are priced starting at $50, and are on sale now. Tickets can be purchased at ticketmaster.com, barclayscenter.com or by calling 800-745-3000. Tickets can also be purchased at the American Express Box Office at Barclays Center. Group discounts are available by calling 844-BKLYN-GP.
# # #
For more information visit www.sho.com/sports , www.premierboxingchampions.com,
follow us on Twitter @ShowtimeBoxing, @PremierBoxing, @LouDiBella, @TGBPromotions, @BarclaysCenter and @Swanson_Comm  or become a fan on Facebook at www.Facebook.com/SHOBoxing, www.Facebook.com/barclayscenter,
and www.Facebook.com/DiBellaEntertainment. PBC is sponsored by Corona Extra, La Cerveza Mas Fina.
CONTACTS:
Swanson Communications: (202) 783-5500, contact@swansonpr.com
Bernie Bahrmasel, DiBella Entertainment:(212) 947-2577
TGB Promotions: (818) 817-8001
Tim Smith, Premier Boxing Champions: timothy@haymonboxing.com
Chris DeBlasio, Showtime Networks Inc.: (212) 708-1633
Matt Donovan, Showtime Networks Inc.: (212) 708-1663
Flo Jocou, Showtime Networks Inc.: (212) 708-7319
Mandy Gutmann, BSE: (718) 942-9587
Stuart Bryan, BSE: (718) 942-9574
Steve Pratt, BZA PR for SHOWTIME: (310) 408-4555
Credentials: www.swansonpr.com/credentials; Deadline to apply is January 11
Website Admin