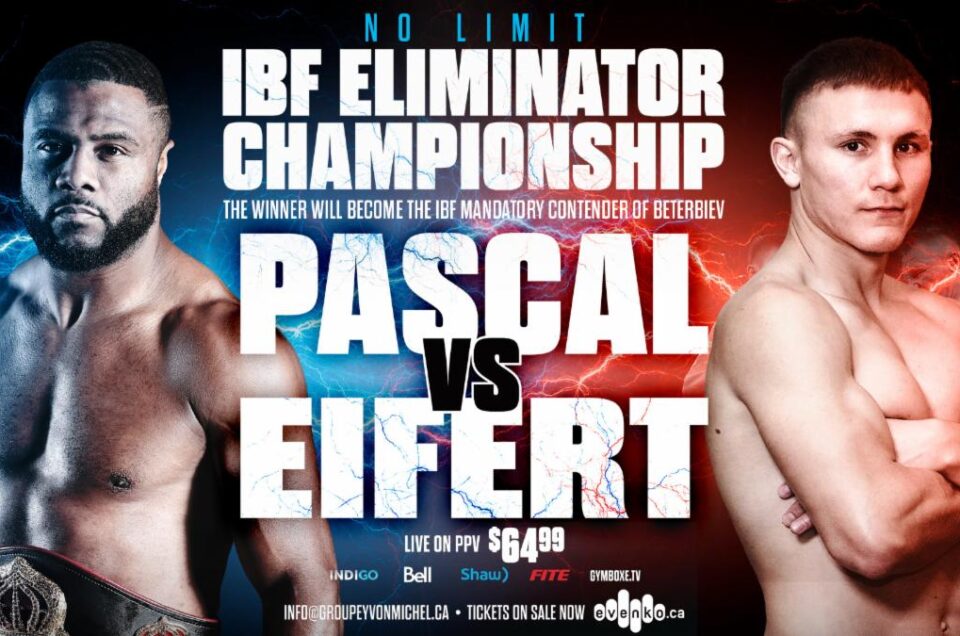 Tickets are now on sale, ranging from $40 in the stands to $500 on the floor. Tables for six people, wine and meal included, are also available for $3,500 and $4,500 plus taxes. Tickets may be purchased on Evenco.ca or by email at info@groupeyvonmichel.ca.Pascal vs. Eifert will be available in Canada via pay-per-view on Canal Indigo, Bell TV, Shaw TV, Fite.tv and GYMboxe.tv for $64.99.

“Five years ago, most people in boxing wrote Jean Pascal off. Since then, his only loss was to Dmitry Bivol and he’s beaten Ahmed Elbiali, Marcus Browne, Badou Jack and Fanlong Meng as an underdog,” said Lou DiBella, President of DiBella Entertainment. “There is a lot of fight left in Jean Pascal, one of Canada’s all-time great fighters. He will prove that on February 9 against Michael Eifert, and secure yet another title shot in his illustrious career.”

“Jean Pascal made his debut with us just a few months after the founding of GYM,” saidGYM President Yvon Michel. “Since then, we have been involved in 36 of his 43 fights, including his last in Quebec in 2018. It is with great pride that we participate in this expected return to Quebec. According to a survey of Quebec boxing experts and amateurs, Champ Pascal has been chosen as the greatest Quebec boxer of the 21stcentury. On February 9, another page in its history will be written.”

Jean Pascal is an Athens Olympian in 2004. He was WBC light heavyweight champion from 2009 to 2011, as well as WBA champion from 2019-2020. He has had 12 world title fights, the first in 2008 in England against Carl Froch and the last 11 years later in Atlanta against Badou Jack. During this period, he met all the best light heavyweights of his generation including Adrian Diaconu, Chad Dawson, Bernard Hopkins, Lucian Bute, Sergey Kovalev, Dmitry Bivol and set many records for ticket sales and pay-per-view, with Lucian Bute at the Bell Center in 2014 where more than 21,000 spectators attended the event. In his most recent fight last May in Florida, he edged undefeated IBF #1 contender Fanlong Meng (17-0) to set the stage for the championship eliminator against Eifert.

Jean Pascal said: “Major props to Lou DiBella, Yvon Michel and Greg Leon for making this happen. It’s been a long time coming, but I’m finally where I want to be, back home performing in front of my people. My fans have always been a major source of inspiration and their kind words have helped keep me going strong at 40 years young.

“It’s very important for me to give you guys a great show and, on February 9, that’s exactly what I’m going to do.

“Michael Eifert is a good, solid fighter and the final obstacle on my road back to the championship. I respect him like all my opponents, but it’s my intention to destroy him as quickly as possible.

“I don’t want to fight away from home again and taking care of business on February 9 is the best way to make sure I won’t have to.”

“Jean Pascal has amazing confidence, a heart bigger than Montreal and you might need two wheelbarrows to carry his, well, let’s call it intestinal fortitude,” said Pascal’s managerGreg Leon.

“Pascal is a throwback who would thrive in any light heavyweight era. As a manager, all you can hope for is the athlete to give 100-percent of himself once that bell rings and, in that regard, Jean Pascal absolutely never disappoints.

“February 9 will be a special night for him. Five years away from home is a long time. Few fighters would have persevered on the road the way he has to make it back here and that just shows the level of champion he is. Michael Eifert will soon learn just how badly Jean wants to remain back at home where he belongs.”

Michael Eifert, 24, lives in Magdeburg, Germany. A professional since 2018, he had his only loss by majority decision in 2020 against Tom Dzemski (14-0), a loss he avenged the following year while winning the IBF Youth and WBC Youth world titles. In his last fight, he captured the IBF Inter-Continental light heavyweight title against Italian Adriano Sperandio, which earned him a place in this title eliminator against Pascal.

“This is a lifetime opportunity and a dream come true for me,” said Michael Eifert. “I can’t wait to come to Canada to give the performance of my life versus a great champion in Jean Pascal. It’s youth versus experience. It’s the young lion challenging the old lion to battle to be the king of the jungle.”

“I want to thank Lou DiBella and Yvon Michel for this fantastic co-promotion,” saidBenedikt Poelchau, Eifert’s promoter. “We have huge respect for Jean Pascal, a legend in the sport of boxing. I also tremendously respect 24-year-old Michael Eifert for taking on such a challenge, for shooting for the stars, at such a young age. He will put his heart into this fight, and I expect an exciting matchup for boxing fans around the world.”

In May of 2000, Lou DiBella launched DiBella Entertainment (DBE), a full-service sports and entertainment company, which has become one of the most successful promotional entities in boxing. Serving as matchmaker, television distributor, marketing advisor, and promoter, DiBella has developed an exciting stable of championship caliber, world-class fighters, such as Sergio Martinez, Bernard Hopkins, Jermaine Taylor, Micky Ward, Deontay Wilder, and George Kambosos, among others. DBE clearly established itself as an industry leader with the successful launch of its monthly-televised “Broadway Boxing” series in November 2003. Prior to becoming a promoter, DiBella held an 11-year tenure as the Senior Vice President of HBO Sports. While at HBO, DiBella created and established the highly successful “Boxing After Dark” series, which featured some of the sport’s greatest fights. He is also a well-known fixture in the film industry, having worked as an Executive Producer for the film “Love Ranch”, as an Associate Producer on “The Fighter”, and making his acting debut in “Rocky Balboa”. He also produced or executive produced numerous documentaries, such as Viva Baseball!, Magic Man, Maravilla, Larry Flynt for President, and Tapia. The President and Managing General Partner for the Richmond Flying Squirrels baseball team, DiBella proudly wears his 2010, 2012 and 2014 World Series rings, as his team is the class AA affiliate to the San Francisco Giants. In 2017, DiBella also became the CEO and Managing Owner of the Montgomery Biscuits baseball team, the AA-affiliate of the Tampa Bay Rays. DiBella was elected into the International Boxing Hall of Fame in 2020 and inducted in June 2022, as well as the New York State Boxing Hall of Fame in 2014 and the Connecticut Boxing Hall of Fame in 2015.

Groupe Yvon Michel is a professional boxing promotion organization, founded in 2004 by Yvon Michel, Alexandra Croft and Bernard Barré, who are still active in the company, the most prolific in the history of professional boxing in Canada. Since its foundation, GYM has promoted 164 events in Quebec, all televised in Quebec on RDS, TVA Sports or Radio-Canada, in addition to participating in 38 international events outside Quebec. Eight boxers have become world champions, Joachim Alcine, Jean Pascal, Adonis Stevenson, Artur Beterbiev, Eleider Alvarez, Marie-Eve Dicaire (twice), Oscar Rivas and Kim Clavel. Eighteen boxers from the organization have delivered 53 world championship fights, maintaining an excellent record of 28 wins, 22 losses and 2 draws. During this period, major American television networks were more active than ever in coming to Quebec to broadcast the most important events of the organization.

Media accreditation requests for the February 9 fight should be submitted to Claire Couturier, Communications Manager at Groupe Yvon Michel.