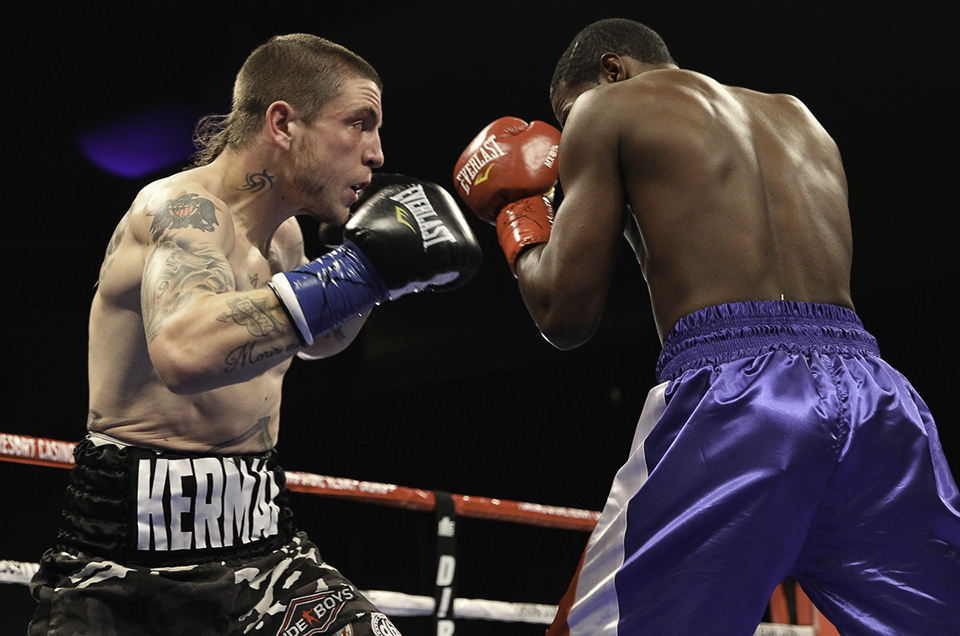 KERMAN LEJARRAGA VICTORIOUS IN SPAIN WITH DOMINANT VICTORY ON SATURDAY NIGHT IN FRONT OF 11,000 HOMETOWN FANS

Bilbao, Spain (November 12, 2017) — Undefeated welterweight contender KERMAN “The Revolver” LEJARRAGA (24-0, 19 KOs), from Bilbao, Spain, thrilled the crowd of over 11,000 at the Bilbao Arena, earning a dominant 10-round unanimous decision versus southpaw JOSE DEL RIO (27-7, 7 KOs) on Saturday night. Scores were 99-90, 98-92 and 99-91.
The victory by the 25-year-old Lejarraga, co-promoted by DiBella Entertainment and MGZ Promotions, was his fifth of 2017 as he closed this year’s campaign in style. The win earned Lejarraga the Spanish welterweight title.

Stated Lejarraga, “It was a very hard fight. I spent 10 weeks of training camp working on my defense and I’m very happy with my performance. I’m growing with each fight and I’m ready for the biggest names in the division.

“I want to stay active and look forward to hearing what’s next. I’m the champion in my country and highly regarded in Europe and want to fight the best anywhere in the world.
“I’m very happy with my performance and thankful for the support of my hometown fans. It was a great night for boxing in Spain.”
Said promoter LOU DIBELLA, President of DiBella Entertainment, “Congrats to Kerman and his trainer Jesus Del Valle on the sensational victory in Spain in front of such a tremendous hometown crowd.
“The welterweight division in the United States is very deep with talent and I believe Kerman fits in near the top. I can’t wait to have him return here in 2018.”
“Kerman is a great fighter, he lives in the gym,” said JESUS DEL VALLE, CEO of local promotional company MGZ Promotions. “He’s the most popular fighter in Spain right now, selling over 11,000 tickets on Saturday night. Kerman is highly ranked in the world ratings and he’s ready for the top names in his division.”
“I am very happy for Kerman, he is a top contender and one of the best welterweights in the world,” said MIGUEL ANGEL DE PABLOS, board member of the World Boxing Council. “With DiBella Entertainment and Jesus Del Valle, he has a great team and we are very happy to have him in our rankings. Kerman is going to be one of the biggest names in boxing.”
Lejarraga is currently world ranked #6 by the WBA and #12 by the WBC.
Lejarraga made his US debut earlier this year on June 9, scoring a second-round knockout against Jose Antonio Abreu at Turning Stone Resort and Casino, in Verona, NY.
MEDIA CONTACT
Bernie Bahrmasel
Double B. Publicity
Phone: + 1 773 592-2986
Email: BernieBahrmasel@yahoo.com
Twitter: @BernieBahrmasel
Website Admin