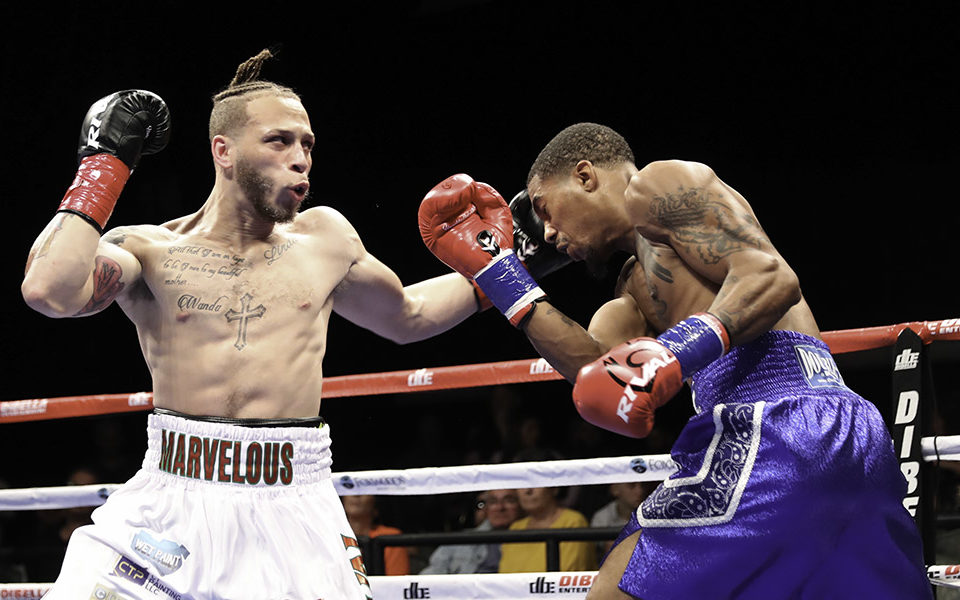 Super lightweight prospect Mykquan Williams began his career with several first-round knockouts, but after going the 10-round distance for the first time as a pro in Friday night‘s main event, the East Hartford, CT, fan favorite earned the most impressive win of his career thus far against Rickey Edwards, 137lbs., of Paterson, NJ. Williams, 140lbs., applied pressure and remained the aggressor for all 30 minutes of combat. Consistently throwing a stiff jab, Williams hit his target upstairs and down with straight rights. Williams’ attack grew more versatile as the rounds continued, landing left hooks to the body and overhand rights to the head. Edwards fought from a defensive posture for much of the bout, searching for opportunities to land counter shots, but he never really landed anything effective until the final round. His four-inch height advantage didn’t bother Williams either. Showing a bit of a mean streak, Williams taunted his foe at times, but never lost focus. With scorecards of 100-90, 97-93, and 96-94, Williams picked up the WBC USNBC super lightweight title while improving to 15-0 (7 KOs). Managed by Jackie Kallen, Williams is trained out of Manchester Ring of Champions Society boxing gym by local legend and community leader Paul Cichon. Edwards’ ledger now reads 12-3 (3 KOs).

In the evening’s co-featured bout, heavy-handed southpaw Elijah Pierce, 124lbs., of Oklahoma City, OK, earned an upset victory against featherweight prospect Irvin Gonzalez, 126lbs., of Worcester, Mass. In round one, Gonzalez made the tactical error of switching to southpaw himself to deal with his adversary’s stance and quickly paid the price for it. Pierce landed a right hook to the body that hurt Gonzalez then followed up with a barrage to send him to the canvas. When Gonzalez arose, he elected to lean against the ropes and trade with Pierce rather than tie him up to clear his head. A straight left decked Gonzalez again before the bell to end round one. Both Pierce and Gonzalez had moments of success in round two, though Pierce had the upper hand, continually finding a home for his straight left upstairs. Back in the orthodox stance to start the third stanza, Gonzalez was controlling the action with jabs and straight rights. However, he once again switched to southpaw and was immediately hit and staggered by a Pierce left hand. When Gonzalez was floored for a third time, the referee intervened to end the contest at the 2:12 mark of the round. With the win, Pierce, now 9-1 (8 KOs), seized the WBC USNBC Silver featherweight title. Gonzalez, who was featured on SHOWTIME’s “ShoBox” series last year, suffered his first defeat, and returned home with a 12-1 (9 KOs) record.

World ranked junior lightweight contender Toka Kahn Clary, 129lbs., of Providence, RI, rebounded from his decision loss last October with an impressive fifth-round stoppage of Carlos Reyes, 128lbs., of Mao, Dominican Republic. Southpaw Kahn Clary’s advantage in speed was evident from the outset, as he planted stinging jabs and straight lefts to the chin of Reyes. Much of Reyes’ offensive output did little to disturb Kahn Clary’s rhythm. In the third, Reyes was dropped by a right hook to the head and Kahn Clary stormed out of his corner very aggressively in the fourth frame, landing combinations of power shots that bloodied his foe’s nose. Kahn Clary felled Reyes again early in the fifth with a left hook to the body and the bout was stopped at the 0:39 mark of the round. Kahn Clary’s record is now 26-2 (18 KOs), while Reyes left the ring at 33-6-1 (23 KOs). Born in Monrovia, Liberia, Kahn Clary immigrated to the United States as a child, initially living in Philadelphia, PA, before settling in Providence, RI. Trained by Peter Manfredo Sr. since his amateur days, Kahn Clary entered the paid ranks in 2012. A highly accomplished amateur with a 119-11 record, Kahn Clary began boxing at age 14 and was a National Golden Gloves champion and a five-time New England Golden Gloves champion.

Heavyweight prospect George Arias, 236lbs., of The Bronx, NY, and Keith Barr, 204lbs., of Glenville, WV, stood shoulder-to-shoulder for eight thrilling rounds of competitive action. Arias targeted the Barr’s body right away. With Barr firing back, an overhand right caught Arias on the temple and sent him to the canvas in round two. Once the New Yorker arose, Arias peppered his foe with jabs and straight rights as he regained his composure. Arias continued this pattern in the middle rounds, mixing in left hooks to the body as well. The very game Barr backed Arias to the ropes in the fifth, landing power shots upstairs. Barr did his best to close the gap during the later rounds, but had to absorb a steady flow of hooks downstairs. In round seven, Barr was stunned by an overhand right to the temple, but he responded with hooks of his own. Arias and Barr closed the contest trading shots until the final bell. The judges tallied 78-73 twice, and 77-74, all for Arias, now 14-0 (7 KOs), via unanimous decision. Barr’s record dipped to 19-12-1 (8 KOs). Born in San Francisco de Macoris, Dominican Republic, Arias moved to New York City in 1996, at the age of four. After graduating from high school, he learned to box at Morris Park Boxing Gym near his home. Arias won the New York Golden Gloves tournament in 2014 then turned professional that October.

Former cruiserweight champion Marco Huck’s second ring appearance in the United States was a short one. Soon after the opening bell, Huck, 217lbs., of Berlin, Germany, and opponent Nick Guivas, 233lbs., of Topeka, KS, fell into a clinch. Huck landed a right hook to the temple of Guivas and dropped him. The same punch resulted in a second knockdown, however the shot came after the referee had called for a break. Following some confusion and with Guivas still groggy and in no condition to continue, the ringside doctor called a halt to the contest on an accidental foul. Huck was then awarded the victory via TKO at the 0:57 mark. The Mashantucket Pequot Tribal Nation Gaming Commission later appropriately changed the bout’s result to a no contest. Huck, who officially moved up to heavyweight in June 2018 and now 41-5-1-1NC (28 KOs), held the WBO world cruiserweight title from 2009-2015, making 13 defenses. Guivas’ record stands at 14-10-3-1NC (9 KOs).

Junior welterweight prospect Adrian Sosa, 141lbs., of Lawrence, MA, knocked out African Benjamin Borteye, 142lbs., of Silver Spring, MD, in 99 seconds. Applying pressure from the opening bell, Sosa dented Borteye’s midsection with a crushing right hook and the Ghanaian dropped to his knees for a full count. Sosa was a 2014 New England Golden Gloves champion and turned professional in July 2016 following an 18-2 amateur career. Sosa upped his record to 11-0 (9 KOs) and Borteye fell to 4-7 (4 KOs).

The 19-year-old junior lightweight prospect Jacob Marrero, 129lbs., of Bridgeport, CT, earned a four-round unanimous decision against Mexican Hugo Aguilar, 132lbs., of Iztacalco, Distrito Federal. The southpaw Marrero kept shooting straight lefts to the body and head while Aguilar’s best offensive attempts consisted of overhand rights. One straight left sent Aguilar flying into the ropes near the end of the opening frame. By round three, Marrero was landing in combination and punishing the midsection with powerful right hooks. In the fourth, a left hook upstairs stunned Aguilar then a combination to the body sent him to the deck for a knockdown. All three judges turned in identical scores of 40-35 for Marrero, now 3-0 (2 KOs), while Aguilar remains winless at 0-8. Compiling an amateur record of 58-9, Marrero was a 2016 New England Golden Gloves Champion, a five-time Connecticut Silver Gloves Champion and a five-time Connecticut Junior Olympics Champion.

In May of 2000, Lou DiBella launched DiBella Entertainment (DBE), a full-service sports and entertainment company, which has become one of the most successful promotional entities in boxing. Serving as matchmaker, television distributor, marketing advisor, and promoter, DiBella has developed an exciting stable of championship caliber, world-class fighters. DBE clearly established itself as an industry leader with the successful launch of its monthly-televised “Broadway Boxing” series in April 2004. Prior to becoming a promoter, DiBella held an 11-year tenure as the Senior Vice President of HBO Sports. He is also a well-known fixture in the film industry, having worked as an Executive Producer for the film “Love Ranch”, as an Associate Producer on “The Fighter”, and making his acting debut in “Rocky Balboa”. The President and Managing General Partner for the Richmond Flying Squirrels baseball team, DiBella proudly wears his 2010, 2012 and 2014 World Series rings, as his team is the class AA affiliate to the San Francisco Giants. In 2017, DiBella also became the CEO of the Montgomery Biscuits baseball team, the AA-affiliate of the Tampa Bay Rays. DiBella was inducted into the New York State Boxing Hall of Fame in 2014 and the Connecticut Boxing Hall of Fame in 2015.