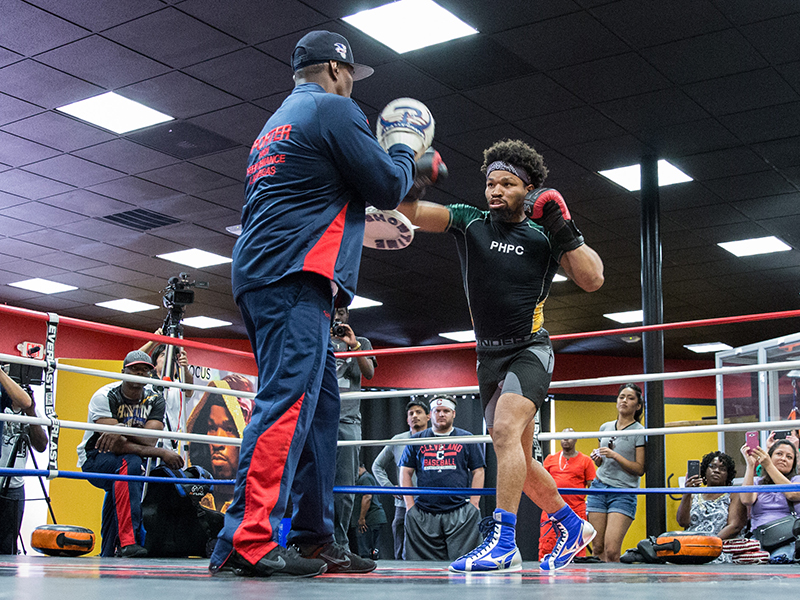 LAS VEGAS (April 5, 2017) – Former world champion Shawn Porter hosted a media workout in Las Vegas Wednesday as he prepares for his welterweight world title eliminator showdown against Andre Berto that headlines a Premier Boxing Champions event Saturday, April 22 from Barclays Center in Brooklyn and live on SHOWTIME.
Televised coverage of SHOWTIME CHAMPIONSHIP BOXING begins at 9 p.m. ET/6 p.m. PT and features unbeaten super welterweight world champion Jermell Charlo defending against top contender Charles Hatley.
Tickets for the live event, which is promoted by DiBella Entertainment, start at $50 (not including applicable fees) and are on sale now. Tickets can be purchased online by visiting www.ticketmaster.com, www.barclayscenter.com or by calling 1-800-745-3000. Tickets are also available at the American Express Box Office at Barclays Center. Group discounts are available by calling 844-BKLYN-GP.
Here is what Porter and his father and trainer, Kenny Porter, had to say Wednesdayfrom the Porter Hy-Performance Center:
SHAWN PORTER
“Every time I see this fight in my head, I feel good about it. I feel like my speed and my boxing ability is going to take care of the first half of this fight. Once we get going and establish the pace of the fight, which is what we’re going to do, after that, we’ll start working in our feints, our head movement, it’s gonna be beautiful. I know that much.
“I’ve seen him in fights where he goes past the fifth and sixth round, and things start to fall apart for him. So if we can get to his body early, and you see everything we do here in the facility, these guys work me almost to death. We’re ready for the 12 rounds plus. We’re always ready to take more out of our guy’s tank and have a lot more at the end.
“I really think there’s an understanding we both have. He tells me what to do and I listen. Like he always says, as long as I listen, everything will play out the way it’s supposed to. We have that one understanding, and the rest just carries itself.
“I’ve seen myself hurting him to the body, but haven’t seen myself stopping him. I can see him going down, but I can’t see him not getting up. Maybe that’s too much respect for him, but I know in the moment, in the fight, I’m going after this dude. I feel like right now, he has the heart of a lion. He’s Haitian, he carries that blood with him, he’s proud of it and I respect that, so I’m ready for a full fight.
“I think my coaches keep me at the peak. My dad keeps me where I need to be. A big part of what we work on is the focus and mentality approaching the fight, as well. I feel like where other guys lack, I have it all. We’re in better condition than most guys. And we work on the mental fortitude just as much as we do on the physical.
“I think when opportunities like this come up, that’s when I really get going. For me, there’s nothing better than fight night. Everything leading up to it is just part of the process. I can tell you that right now, we’re talking the fight, I’m excited and I want it.”
KENNY PORTER, Shawn’s Father & Trainer
“I think we got the right sparring partners. We’ve had Brandon Adams, who is like a bigger version of Shawn, in here. He does a good job of emulating Berto. We also now have Hank Lundy in. Lundy is a guy that’s bringing speed, quickness, power and an attitude every time they spar. He’s saying things to Shawn, popping off at Shawn, and if Shawn lands a good punch on him, he’s coming right back. And we’ve been using Mickey Bey on the back end of our sparring sessions. It’s working out pretty good. We’re just looking to push Shawn really hard.
“We’re never satisfied about anything. My thing is more than anything else, is we’re asking him to do the things we’ve worked and practiced and put it all together so we can take that to the next fight and the next camp instead of starting over and restarting. It’s coming together, and we’re liking what we’re seeing. Never satisfied, but I would like to see him out-box him, out-punch him, out-hustle him, then I would like to see him punish him. That would be the ultimate scenario. You do all these things we worked on, then you punish him.”
#          #          #
ABOUT BERTO vs. PORTER
Andre Berto vs. Shawn Porter is a WBC welterweight world title eliminator between former 147-pound world champions. The 12-round bout headlines SHOWTIME CHAMPIONSHIP BOXING, presented by Premier Boxing Champions, Saturday April 22 from Barclays Center, the home of BROOKLYN BOXING™. In the co-main event, undefeated super welterweight world champion Jermell Charlo battles top rated challenger Charles Hatley, with televised coverage beginning at 9 p.m. ET/6 p.m. PT.
For more information visit www.SHO.com/Sports follow on Twitter @ShowtimeBoxing, @AndreBerto, @ShowtimeShawnP, @LouDiBella, @BarclaysCenter and @Swanson_Comm or become a fan on Facebook at www.Facebook.com/SHOBoxing, www.Facebook.com/DiBellaEntertainment, www.Facebook.com/barclayscenter. PBC is sponsored by Corona, La Cerveza Mas Fina.
CONTACTS:
Swanson Communications: (202) 783-5500
DiBella Entertainment: (212) 947-2577
Tim Smith, Premier Boxing Champions: timothy@haymonboxing.com
Chris DeBlasio, Showtime Networks Inc.: (212) 708-1633
Matt Donovan, Showtime Networks Inc.: (212) 708-1663
Flo Jocou, Showtime Networks Inc.: (212) 708-7319
Mandy Gutmann, Barclays Center: (718) 942-9587
Stuart Bryan, Barclays Center: (718) 942-9574
*Media Credentials: www.swansonpr.com/credentials; Deadline for application is Wednesday, April 12
Website Admin