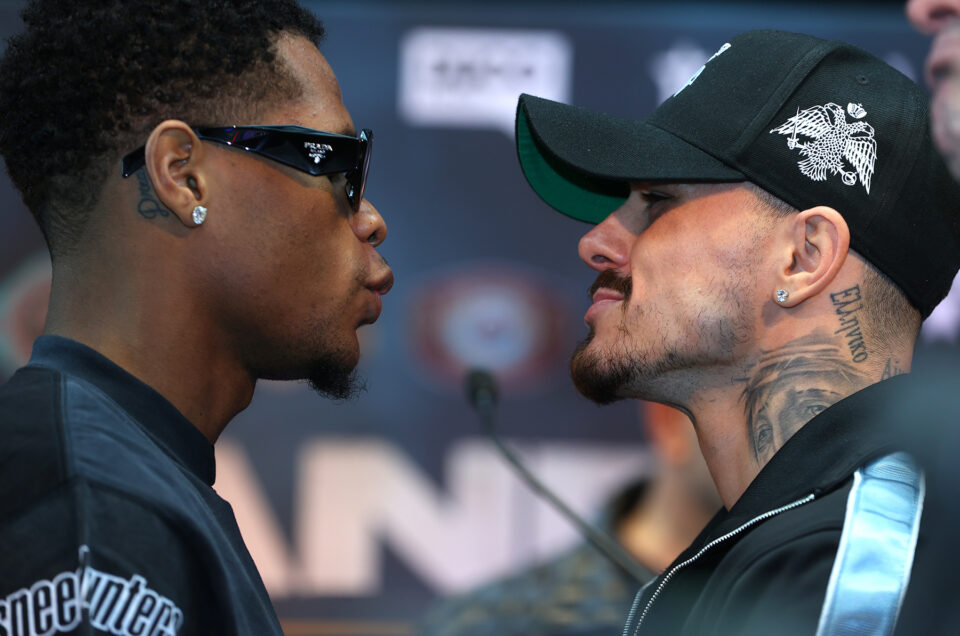 The combatants talked some trash, but it was Haney’s father/trainer, Bill Haney, who stole the show. He presented Kambosos (20-1, 10 KOs) — or at least attempted to — a copy of Sun Tzu’s “The Art of War,” a reference to Kambosos post-weigh-in mind tricks before their first bout back in June. Kambosos was none too pleased and knocked the book off the dais.

Haney (28-0, 15 KOs) dominated Kambosos to unify all the belts at Melbourne’s Marvel Stadium, and a little more than four months later, the world’s top lightweights will do it again.

At Friday’s press conference, this is what the fighters had to say.

“It’s great to be back here in Melbourne. I made history here. And it won’t be no different on the 16th. The name of the game is to hit and not get hit. I’m a student of the game. So, that’s what I follow. I might be one of the best defensive fighters in boxing. But on the 16th, I’ll look to show more offense.”

“They’ve been quiet. But every time they open their mouth, it’s a different excuse. They talk this quiet stuff, but they keep making up excuses. Now it’s the coach. Then it was the referee, because I was holding. Every excuse in the book. But why did you fire your whole team? If you truly felt like I was holding too much, why did you fire your whole team?”

“There are a lot of big fights out there to be made. I’ve been calling out Loma for a while. But my main focus is on getting past George Kambosos. Then we can talk about what’s next.”

“I’m physically and mentally focused on this fight right now. Nothing else matters. Whatever was said or whatever was done…I’m zoned in on this moment. Nothing will break my focus. I’m not interested in anything else. I’m interested on Sunday and what I do then.”

“The changes have been made. You learn from your losses. You come back a better fighter. So, I’ve made my changes. I’ve looked at certain things. I’ve gone back to my roots as well. We’re just focused. I’m not going to give anything away. I’m just zoned in. Sunday is when I’ll do my talking. We’ll see who laughs last.”

“He’s got a fantastic jab. But we have put in fantastic work to not only evade his jab, but whatever he tries to bring. It doesn’t matter. Did I let him jab too much? He’s got a great jab. But that’s why boxing is the sweet science.”

“Going into the first fight, we knew that George possessed things that are on an elite level. Our preparation was to outbox him. We wanted to do that and we wanted to do that convincingly based on the unknown. We didn’t know what we were going to get in Australia. To our surprise, we’ve met some wonderful people. The Australian government has been totally supportive. We feel this is a second home. Unlike the Kambosos’ over there, who make excuses after excuses. And we’re all tired of hearing them.”

“Devin gave me one job today. He told me to go out and get this for George. It’s
‘The Art of War’ [by Sun Tzu]. If you can hand it to him over there. We want him to be well prepared and not misinformed. What excuse is he going to have on the 16th?”

“He has a very impressive record. You don’t become ranked as number 2 in the world without being a very good fighter. I’ve prepared for a very tough fight. He’s obviously had his whole career in Thailand. He’s been very successful over there. But I feel that he’s been a big fish in a small pond. I plan to welcome him into the world stage and show him the next level in this sport.”

“This is my dream, to fight for a world title and become world champion. And this is the final hurdle. I’ve been working extremely hard. I’m very motivated to go out there and win this fight.  I’ll do whatever takes. You saw a great performance last time, and this time will be even better.”

“This is my first time fighting as a professional outside of Thailand. I’m very excited. At the same time, I feel honored that I’ve gotten the chance to fight in Australia in this beautiful country. It’s a very hospitable country, and I’m happy to be here.”

“This is the perfect fight for me right now. I’ve had a very busy 14 months. This is my fifth fight in 14 months. I’ve worked my way up the rankings. And, Norbelto is ranked at number two in the world, and I feel like this is the perfect fight for me. I’m going to take his ranking. I’m going to put on the best performance of my career this Sunday and earn myself the opportunity to fight for a world title next.”

“I have had two world title opportunities. I’m looking forward to this third opportunity. I have seen Moloney fight. I know him very well. I have a good record, thanks to God and to my manager, Belgica Peña, president of Shuan Boxing, and we’re coming for more.”

“Susie has a lot of experience. She’s been in the game for a long time. She’s paved the way for women’s boxing here in Australia, so I’m just excited to take on this match.”

“I’ve fought in Melbourne for a very long time. Obviously, I’ve had a couple of fights overseas. But I’ve won the WBC and the IBF title here in Melbourne, so everything comes in threes, I guess. So, I’m really looking forward to it.”