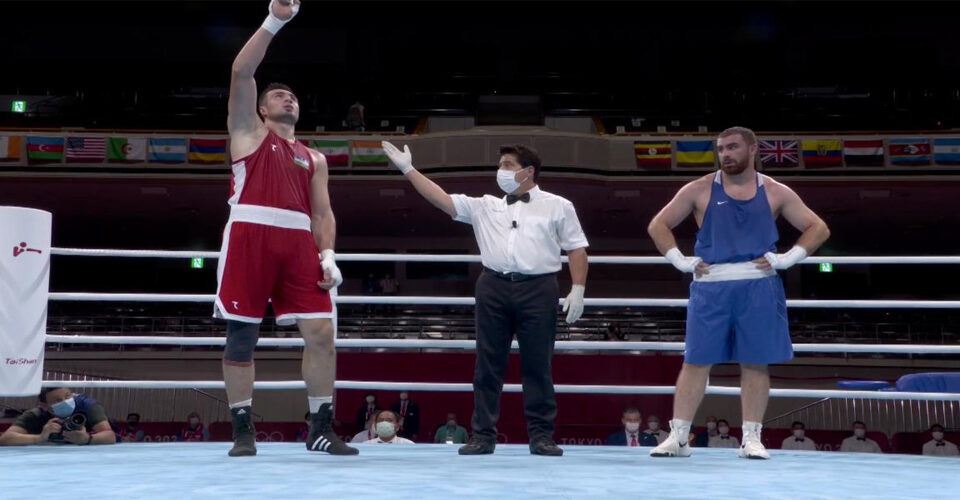 Following a shutout decision victory against Abdullayev Mahammad, of Azerbaijan, in the super heavyweight Round of 16 preliminaries at the Tokyo Olympics, “The Big Uzbek” Bakhodir Jalolov advances to the tournament’s Quarterfinals tonight. He will face off against India’s Satish Kumar at Kokugikan Arena. Jalolov’s bout will broadcast as part of Boxing Session 17, which begins tonight at 10:00pm ET / 7:00pm PT, streaming on the NBC Olympics Website. He is expected to be in the ring just after midnight on the East Coast, at 12:06am ET / 9:06pm PT.

Standing six-foot-six, the 27-year-old Jalolov, who holds a professional record of 8-0 with eight knockouts, is taking a break from the paid ranks to return to the Olympic stage seeking gold medal glory. Jalolov previously competed at the 2016 Olympics, in Rio de Janeiro, Brazil. He now has the distinguished honor of being the first athlete in the history of Uzbekistan to be the country’s flag bearer at the Opening Ceremonies twice.

Born in Sariosiyo, Uzbekistan, the southpaw Jalolov has garnered tremendous accolades as an amateur, winning gold medals at the Asian Amateur Boxing Championships three times (2017, 2019 and 2021), World Cup Tournament, Liventsev Memorial Tournament, Great Silk Way Tournament, and Duisenkul Shopokov Memorial Tournament in 2015, and at the World Cup of Petroleum Countries Tournament in 2014, as well as winning numerous National championships. During his amateur career, Jalolov also focused on his education, earning a Master’s Degree in Sports Science.