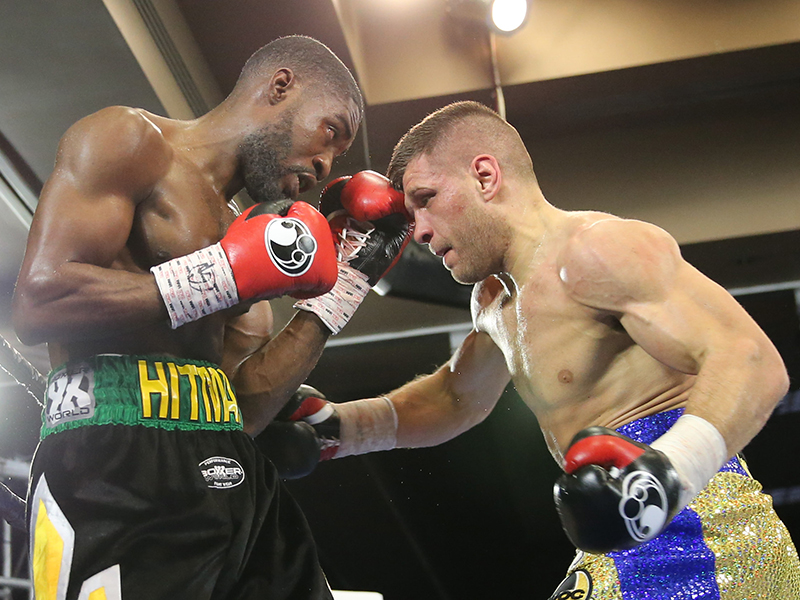 TUNICA, MS (March 14, 2017) – Middleweight contender Sergiy Derevyanchenko (10-0, 8 KOs) remained unbeaten Tuesday night as he delivered a blistering fifth-round stoppage of previously undefeated Kemahl Russell (10-1, 8 KOs) in the main event of Premier Boxing Champions TOE-TO-TOE TUESDAYS on FS1 & BOXEO DE CAMPEONES on FOX Deportes from the Fitz Tunica Casino & Hotel in Tunica, Mississippi.
“I was so happy to be back in the ring,” said Derevyanchenko. “I felt very good in there. Once I got going and sped it up, he couldn’t keep up with me. I’m ready to take on anyone.”
The unbeaten Russian, who fights out of Brooklyn, was at a major height disadvantage against the six-foot Russell, who attempted to control the fight with his jab from a distance. This led to a slow-paced fight early, which seemed to favor the taller boxer.
Derevyanchenko would eventually find the distance as he used double left hooks and feints to work inside Russell’s jab. Round four saw the two men begin to exchange in more flurries dangerous on the inside, with Russell taking the brunt of the damage.
Now fully settled into the fight, Derevyanchenko began to unload in round five and connected on a huge straight right hand that rocked Russell’s head back and put his opponent in immediate peril. Derevyanchenko pounced on the opportunity and began landing big shots in succession until referee Bill Clancy jumped-in to stop the fight 1:06 into the fifth-round.
The co-main event of the night saw undefeated prospect Ahmed Elbiali (15-0, 12 KOs) make quick work of Brazil’s Jackson Junior (20-8, 19 KOs) as he scored a first round knockout just 1:33 seconds into the first round.
Elbiali was returning from a 14-month layoff after recovering from a broken hand, but he wasted no time trading big punches. Both men were aggressive early on and dealt big hooks from the opening bell.
Working off of his jab, Elbiali caught Junior in a defensive crouch and connected with a perfect overhand right to the temple that sent Junior to the canvas. Junior was able to get to his feet but was deemed unable to continue by the referee, who called a halt to the bout 1:33 into the round.
The opening bout of the telecast saw unbeaten prospect Jamontay Clark (11-0, 7 KOs) stop a game Gaku Takahashi (15-7-1, 7 KOs) after seven rounds of action in their welterweight bout.
Cincinnati’s Clark survived an early stumbled as Takahashi connected with a jab that stunned and stumbled Clark midway through the first round. Clark was able to regain his footing and use his jab as his primary mode of attack.
The southpaw Clark began timing Takahashi with left hands and right hooks and was able to control the action each round. Takahashi attempted to match Clark’s punch output, specifically targeting his opponent to the body, but was unable to land enough clean blows.
Takahashi came out aggressive in round seven and initiated several big exchanges. It was Clark who got the better of these moments, hitting Takahashi with a big left hand late in the round that left his opponent temporarily stunned, although able to return to his corner. Takahashi’s corner had seen enough however and called an end to the fight at the end of the seventh round.
#          #          #
Fans can live stream the fights on FOX Sports GO, available in English or Spanish through the FS1 or FOX Deportes feeds. The fights are available on desktop at FOXSportsGO.com and through the app store, or connected devices including Apple TV, Android TV, Fire TV, Xbox One and Roku. In addition, all programs are also available on FOX Sports on SiriusXM channel 83 on satellite radios and on the SiriusXM app.
For more information visit www.premierboxingchampions.com, www.ringstar.com,http://www.foxsports.com/presspass/homepage and www.foxdeportes.com.
Follow on Twitter @PremierBoxing, @FS1, @FOXDeportes, @TGBPromotions and @Swanson_Comm and become a fan on Facebook at www.Facebook.com/PremierBoxingChampions, and www.facebook.com/foxdeportes. Highlights available at www.youtube.com/premierboxingchampions.PBC on FS1 & FOX Deportes was sponsored by Corona Extra, La Cerveza Mas Fina and promoted by TGB Promotions.
Website Admin