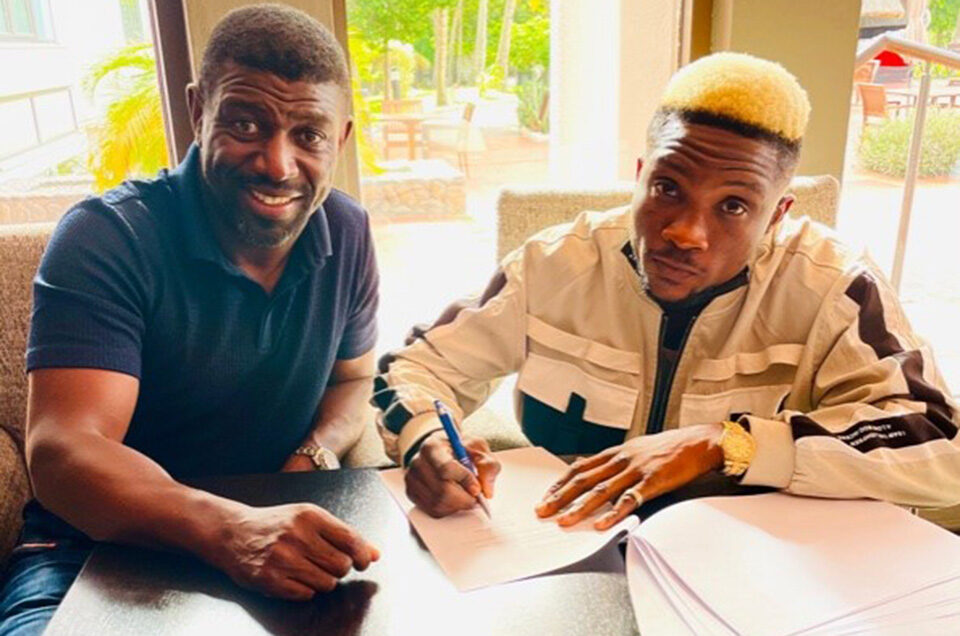 Wahab, born in Lagos, Nigeria, spoke of his immense pride at sealing his contract and excitement at linking up with world-renowned trainer Manny Robles.

“I am pleased to be with them because I know the good work they have done with Richard Commey and I know that with this team, along with my new trainer Manny Robles, I will become a world champion,” continued Wahab. “I want to thank Charles Quartey and Kamel [who formed my previous team] for all the hard work they have put into my development over the years, and I will not let them down.”

It was a coming together of Amoo-Bediako and Lou DiBella that started Richard Commey’s rise to prominence and world championships, with Michael taking Commey from the streets of Accra to Madison Square Garden.

Amoo-Bediako’s new management contract with Wahab excites him just as much and reminds him of the early days with his former IBF lightweight world champion.

“I am really pleased to add 20-0 super featherweight Joshua Wahab to our growing number of fighters that will be plying their trade stateside with DiBella Entertainment,” said Amoo-Bediako. “My relationship with Lou since the signing of Richard Commey has grown into an understanding of what it takes to make an African fighter a world champion.

“There are many stereotypes when it comes to African fighters and we are working hard to break those down. I believe, with Joshua Wahab, we have another potential champion from the motherland. He will be training with world-renowned trainer Manny Robles, who I know is excited to be linking up with Joshua. We look forward to his progress in what is a very hot division with the likes of Oscar Valdez, Shakur Stevenson, Joseph Diaz, Carl Frampton, and DiBella’s own Tevin Farmer, to name but a few.”

The relocation stateside will be one of the largest obstacles for the Ghana-based Nigerian native, and the culture change has presented issues for those who’ve completed it in the past. Wahab is a determined individual, desperate to seize his opportunity, but the trainer plotting his route to the top knows it’s one step at a time.

“I am definitely looking forward to working with Joshua,” added new trainer, and Los Angeles-based creator of champions, Manny Robles. “I’m excited to have Joshua arrive in America and initiate training. I’m looking forward to the journey and we will take one fight at a time.”

Fellow Amoo-Bediako/DiBella stablemate and friend Richard Commey had some words of wisdom for the WBA Pan-African champion.

“It’s great that Joshua will be joining me in America. I have sparred with him in Ghana on a couple of occasions and I can tell he is going to be a problem for anyone in the 130-pound division,” said Commey. “He now has the right promoter and, of course, the best manager and now teaming up with Manny [Robles], I think he has a great opportunity to become a world champion. But he must listen and work hard and not be distracted by outside influences once he reaches America.”

As the deal was finalized, the final word went to Lou DiBella, Wahab’s new promoter. DiBella has specialized in taking the sport’s underdogs or unfancied and has reveled in playing a part in their success. In Wahab, he believes he has the chance to do it all over again and that excites him.

“Joshua Wahab is one of thetop super featherweights in Africa. After developing himself locally, building his record to 20-0, Wahab has been scouted by Michael Amoo-Bediako, who is one of the premiermanagers in the game and one of the most influential people in the African boxing scene,” said Lou DiBella, President of DiBella Entertainment.

“Many African fighters throughout boxing history have left home to test themselves against the best and now, it’s Wahab’s turn. Amoo-Bediako, who helped introduce former world champion Richard Commey to an American audience, has teamed up with DiBella Entertainment to bring Wahab to the United States. I am excited to work with Wahab as he reaches his full potential.”